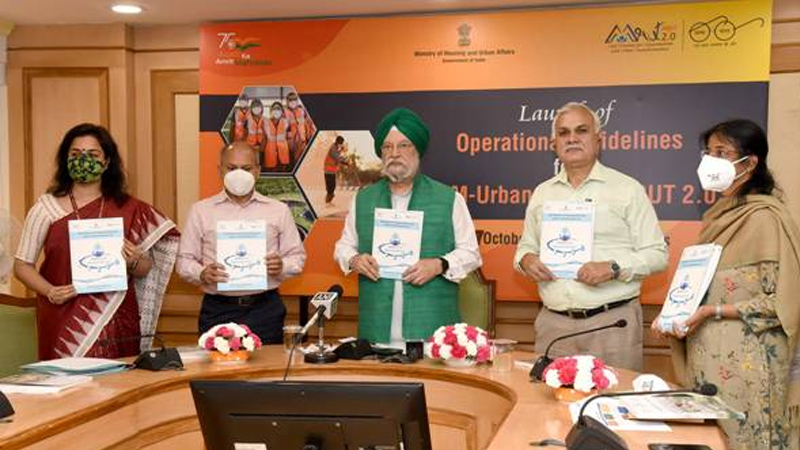 Union Minister for Ministry of Housing and Urban Affairs (MoHUA) Shri Hardeep Singh Puri launched the operational guidelines of Swachh Bharat Mission – Urban 2.0 and AMRUT 2.0, here today. This follows the ceremonial launch of SBM-Urban 2.0 and AMRUT 2.0 by Hon’ble Prime Minister on 1st October 2021, stakeholder consultations on 5th October 2021 at Lucknow (during the Azadi ka Amrit Mahotsav celebrations of MoHUA), and Cabinet approval of the Mission on 12th October 2021.

The SBM-U 2.0 and AMRUT 2.0 guidelines have been designed after multiple rounds of stakeholder consultations and feedback from them. The guidelines have been designed under the overarching guiding principles that include equity and inclusiveness to ensure that Mission benefits reach all sections of society, focus on capacity building, extensive digital enablements for implementing every component of the Mission. Speaking at the occasion, the Minister said the second phases of both the missions are set to transform the country into a really swacch country. The country had become ODF in 2019, on the basis of third party verification,and it will now move to ODF+ and ODF++. Shri Puri said that movement from ODF to Garbage-free will bring about major changes in the ecosystem. He said that AMRUT Mission was earlier covering only 500 cities, and the same will now expand to all the cities. He said that the scheme will not only provide water tap connections, it will also help in realization of the real value of water.Describing the launch of guidelines as the Diwali gift to the citizens of the country for a clean environment, he said that these are being issued within four weeks of the launch of the mission. The Minister lauded the State Governments and ULBs for participating in both the missions whole-heartedly, and also signing the tripartite MoU in such a short time. 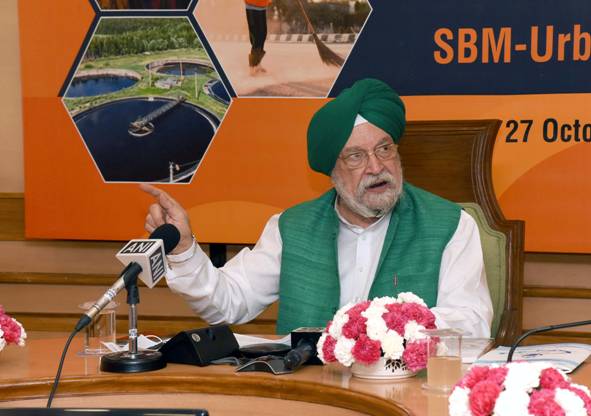 Minister of State for Ministry of Housing and Urban Affairs Shri Kaushal Kishore, joining the event through virtual mode said that SBM became a people’s movement and ushered a change in their habits and attitudes. He said that the Prime Minister himself led from the front, and this helped in the large-scale mobilization and involvement of people. He said that provisioning of the 24X7 water supply in cities by AMRUT will provide big relief to Urban dwellers.

Budget outlay of SBM-U 2.0is ₹1,41,600 crore. The launch ceremony witnessed the signing of a tripartite Memorandum of Understanding (MoU) of States/ UTs and nearly 4,800 ULBs with MoHUA, within a 24-hour timeline. As per the MoU, the Government of India, in partnership with States/UTs and ULBs, is committed to make all cities ‘Garbage Free’ and ‘Water Secure’, in order to contribute to the achievement of the Sustainable Development Goals (SDG) 2030, which will ultimately improve the quality of life and ease of living of urban populations, thus leading to urban transformation. In line with the vision of the Prime Minister, SBM-U 2.0 has been designed to realize the aspiration of making all our cities ‘Garbage Free’. This will signify a step forward in the march towards effectively addressing the challenges of rapidly urbanizing India, while contributing towards achievement of the Sustainable Development Goals 2030.

SBM-U 2.0 envisions to make all cities ‘Garbage Free’ and ensure grey and black water (used water) management in all cities other than those covered under AMRUT, making all urban local bodies ODF+ and those with a population of less than 1 lakh as ODF++, and Water+, thereby ensuring that no untreated used water is discharged in open to pollute water bodies, thus achieving the vision of safe sanitation in urban areas. The Mission will also focus on source segregation of solid waste, utilizing the principles of 3Rs (reduce, reuse, recycle), scientific processing of all types of municipal solid waste and remediation of legacy dumpsites for effective solid waste management.

Over the last seven years, the Mission has reached all corners of the country and has changed the lives of countless citizens with its ‘people first’ focus. The Mission has revolutionized the sanitation space in urban India by building over 70 lakh household, community and public toilets, thus providing safe and dignified sanitation solutions for all. The Mission has prioritized the needs of women, transgender communities, and persons with disabilities (Divyangs).

Taking the journey forward, the Mission is moving on the path of sustainable sanitation with over 3,300 cities and over 950 cities being certified ODF+ and ODF++ respectively, and 9 cities certified Water+, which entails treatment of wastewater and its optimum reuse. The thrust on scientific waste management is evident with waste processing in India going up by over four times from 18% in 2014 to 70% today. This has been aided through 100% door-to-door waste collection in 97% wards and source segregation of waste being practised by citizens in letter and spirit across 85% wards. More importantly, the Mission has been able to bring about a marked difference in the lives of sanitation workers and informal waste workers. The active participation of 20 crore citizens (comprising over 50% of India’s urban population) in the program has successfully transformed the Mission into a people’s movement, a true Jan Andolan. The launch of operational guidelines of SBM-Urban 2.0 has set the stage for States/ UTs and ULBs to begin the next phase of their journey towards transforming Urban India. 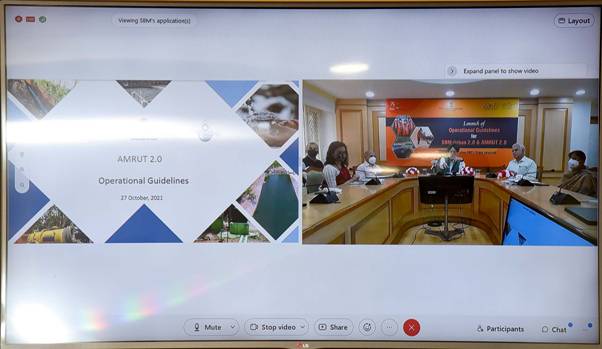 AMRUT, first focused water Mission was launched in June 2015 in 500 cities. In the spirit of “Transformation to Saturation”, Prime Minister launched AMRUT 2.0 on 1 October, 2021.AMRUT 2.0 is a step towards achieving water secure cities to support the spirit of AatmaNirbhar Bharat. 2.68 crore new household tap connections and 2.64 crore sewer connections/ coverage with septage management are proposed under AMRUT 2.0.

Under AMRUT 2.0, cities will submit City Water Balance Plans (CWBPs) online on a robust Mission portal of MoHUA. CWBPs will give the status of water availability, water demand and supply in the city culminating in gaps in services. With target of filling theses gaps projects will be formulated in from of City Water Action Plan. These plans will be aggregated at State level in form of State Water Action Plan (SWAP).  Mission mandates implementation of 10% worth of funds allocated to million plus cities in PPP mode. Taking up projects on 24×7 water supply in 500 AMRUT cities which have population above one lakh is encouraged.

Funding will be done to the States and Union Territories for project implementation, Administrative & Other Expenses. Project funds will be released in three instalments of 20:40:40. Implementation of reforms on Property Tax and user charges is mandatory to get uninterrupted funding from third year onwards. Cities will also submit City Aquifer Management Plans with focus on maintaining positive ground water balance in aquifers. Mission will also fund the outcomes achieved through sources other than AMRUT. Mission management will be paperless and on a complete online platform. Under the gig economy model Mission will co-opt women and youth for concurrent feedbacks about its progress. Mission also has a reform Agenda targeted towards strengthening municipal governance and water security of cities. Major reforms are reducing non-revenue water to below 20%; recycle of treated used water to meet at least 20% of total city water demand and 40% for industrial water demand at State level; 24×7 water supply with ‘Drink from tap’ facility; rejuvenation of water bodies; GIS based master plans of the cities & efficient town planning; credit rating of cities and raising funds through issuance of municipal bonds. Successful implementation of reforms will be incentivized.