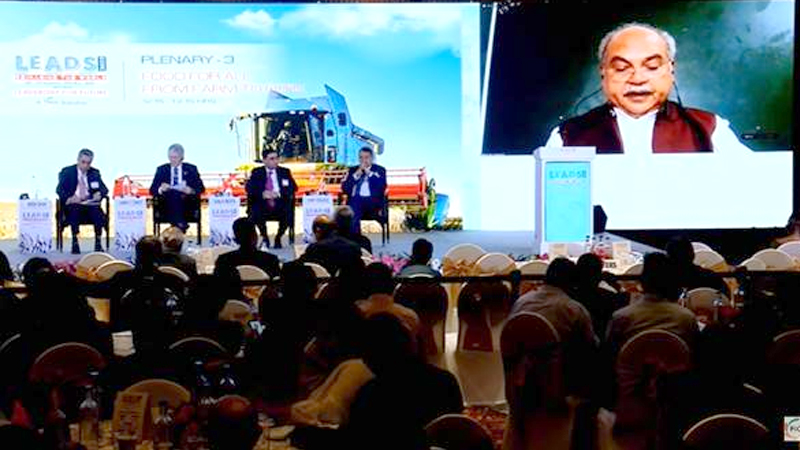 The Union Minister for Agriculture and Farmers Welfare, Shri Narendra Singh Tomar has said that India, apart from being self-sufficient in food production, has the capacity to meet the food requirements of a large part of the world. Keeping in mind the needs and challenges of the future, the country is moving ahead with strategic plans, he said.  We are aware that to sustain high food grain production, we have to increase productivity too. He said that incorporating new farming technology, sharing it with farmers and better irrigation system will reduce the cost of agriculture production and also result in increased production and productivity of food grains. Shri Tomar said that everyone’s cooperation is required, so that income of our farmers increases and we continue to contribute for the food security of the country and of the world. Shri Tomar was virtually addressing the ‘Leeds-2022 conference’ organized by Federation of Indian Chambers of Commerce and Industry (FICCI). In the session on ‘Food for All: Farm to Fork’, Shri Tomar said that despite the Corona pandemic, India’s agriculture sector has witnessed a significant achievement of 3.9% growth rate. Also, our agricultural exports crossed Rs 4 lakh crore mark, which we have to keep increasing. Shri Tomar said that with the world population projected to be around 900 crore by the year 2050, the demand for food will increase rapidly, resulting in increase in demand for agricultural land, grazing land for livestock and fertilizers and genetically modified crops. He said that under the leadership of Prime Minister Shri Narendra Modi, agriculture has expanded significantly in the country in recent years. We have emerged as the second largest food producer in the world, he said. India’s geography, climate and soils are very diverse, so it is naturally excellent in producing a wide range of agricultural commodities. Shri Tomar said that we can grow more crops than any other nation. India has the highest cropping density in the world. According to the fourth advance estimate, India’s foodgrain production in the year 2021-22 is 315.72 MT.

Shri Tomar said that to make India self-reliant (Atma Nirbhar )and internationally competitive, Government is continuously working for growth of small farmers. Many important schemes are being implemented in this direction, so that agricultural challenges can be reduced and the income of the farmers can be increased. Along with this, India is fast on its journey to become world leader in the agriculture sector. He said that the agriculture industry in India is expected to gain further momentum in the coming years due to increased investment in agriculture infrastructure including irrigation systems, storage and cold storages. Additionally, the increased use of genetically modified crops is also expected to increase the yields of Indian farmers. Shri Tomar said that under the Pradhan Mantri Matsya Sampada Yojana, the target of the Central Government is to invest more than Rs. 70,000 crore in the fisheries sector by the year 2024-25. The government expects to increase fish production to 220 lakh tonnes by 2024-2025.

The Union Minister said that the PLI scheme for Food Processing is being implemented with an incentive of Rs 10,900 crore in the next 6 years, at the same time, under the Krishi Udan scheme, assistance and incentives are being provided for the movement of agricultural products by air transport, which is especially beneficial for the Northeast and tribal areas. Farmers, freight forwarders and airlines are benefiting from this. Digital Agri Mission has also been started. Technology will increase transparency, so that farmers will get full benefits of all the schemes. Drone technology is also being promoted. The more technology and transparency in agriculture increases, the more profit will be there. Shri Tomar said that National Oil Palm Mission has been started with the expenditure of Rs.11,000 crores. He said, under the leadership of India, International Year of Millets will be celebrated next year, the preparations for which are in full swing.

New Zealand’s Minister of Trade and Export Development, Agriculture, Biosecurity, Land Information and Rural Communities, Mr. Damian O’Connor, and industry representatives and others were present at the conference.