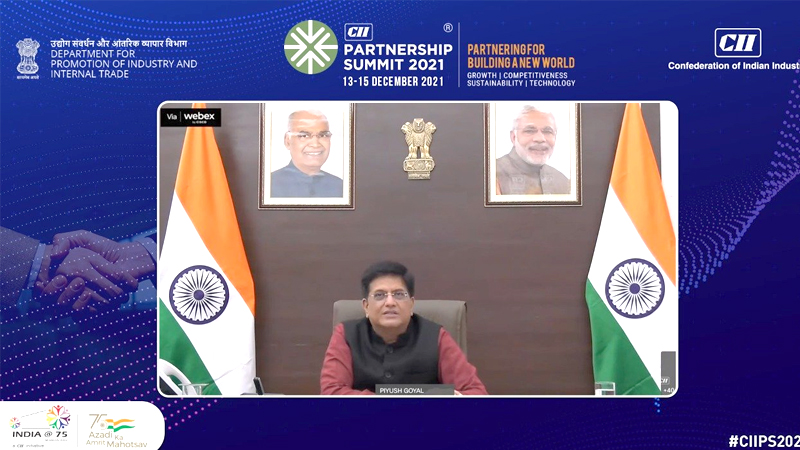 The Minister of Commerce and Industry, Consumer Affairs, Food and Public Distribution and Textiles, Shri Piyush Goyal today called upon fellow Ministers of neighbouring countries to work together to transform the subcontinent. He was addressing the “CII: Partnership Summit -Ministerial Meeting” virtually from New Delhi today.

The Minister called for enhancing India’s economic ties with the nations of the Southern African Customs Union which consists of Botswana, Namibia, South Africa, Swaziland and Lesotho. He said that India is looking for FTAs with like-minded nations with transparency and mutual benefit and growth as key pillars.  He added that India is also reviewing existing FTAs with ASEAN, Japan, Korea to strengthen them and forging enhanced trade alliances with countries like UAE, EU, UK, Israel, Australia, Canada, Russia, Oman and the GCC.

Shri Goyal said that during COVID-19 pandemic, India has emerged as a source of resilience and a trusted Partner and added that we had tried to the best of our ability to meet all our international service commitments.

He said that during the course of the pandemic, India had not only become self-sufficient in production of critical medical supplies, PPEs, testing kits, masks etc. but had also supplied these necessities to nations in need. He highlighted India’s one-of-its-kind vaccination drive, through which 1.3 bn doses of vaccine have already been administered.

The Minister also assured that India would continue helping nations in need as we intrinsically believed in brotherhood, partnership and the need to work together to solve problems collectively. He added that India had focussed on its neighbourhood during the pandemic and stood ready to support all its friends with vaccines and medical supplies.

Pointing out that India’s voice was visible in the G20 declaration this year, which successfully amplified the voice of the developing countries of the world, the Minister said that the world is acknowledging India’s leadership.

Shri Goyal said that Indian economy has recovered sharply and added that the rising economic indicators point towards ‘an India shaping up for a growth decade’. The Minister said that India had seen a GDP growth of 8.4% in Q2, high exports, high FDI and large amounts of investments being done by Indian companies in other nations, he urged the Ministers to invite Indian companies to invest in their economies and help create jobs.

Shri Goyal said that we need to focus on vital aspects which will impact our future and direction of growth, as we deepen our global engagements. He outlined 6 areas on which India is focussing to build a sustainable, inclusive and resilient ecosystem for future partnerships; Trade Agreements, Investments, India’s strengths as a supply chain alternative, Ease of Doing Business, Innovation and Sustainability.

Underscoring India’s initiatives in investment promotion, Shri Goyal said that the Government has been inviting businesses of other countries to seize investment opportunity as ‘India is the place to be’ with its accessibility, choice, openness and opportunities.

Speaking of India’s quest to improve Ease of Doing Business, he said that initiatives like the National Single Window System and the Industrial Land Bank were helping improve the ease of doing business significantly.

Shri Piyush Goyal said that under Prime Minister Shri Narendra Modi, New India is becoming the Global hub for innovation with the third largest Startup ecosystem with 79 Unicorns. He said that Startups have the potential to catalyse India’s integration in Global Value Chains and create global impact.

Emphasizing upon India’s initiatives in the direction of Sustainable Development, Shri Goyal said that India will reach its non-fossil energy capacity to 500 GW by 2030 and meet 50% of its energy requirements from Renewable Energy, one of the world’s most ambitious Renewable energy programs. It may be noted that India has pledged to achieve Net Zero Emissions by 2070.

The path to economic growth must be intertwined with a commitment to sustainability. The Minister said that as India celebrates ‘Azadi ka Amrit Mahotsav’ to mark 75 years of Independence, it is also preparing a blueprint for next 25 years to determine where India will be at 100 years of independence.  He invited Ministers participating to join hands with India to bolster our collaboration in Research and Development, innovation, Intellectual Property Rights etc.

Speaking of India’s confident march on the path of rapid growth with ‘Sabka Prayas’ of 130 crore citizens, Shri Goyal said that this is the time to be in India and invest in India!

He called upon Ministers from various nations to take forth the agenda of strengthening partnerships between India and the world and re-stabilize and revitalize economies in the post COVID-19 world.

Shri Goyal Congratulated CII for their efforts to organise the Partnership Summit and said that the Summit has given us a chance to deliberate and build new partnerships.