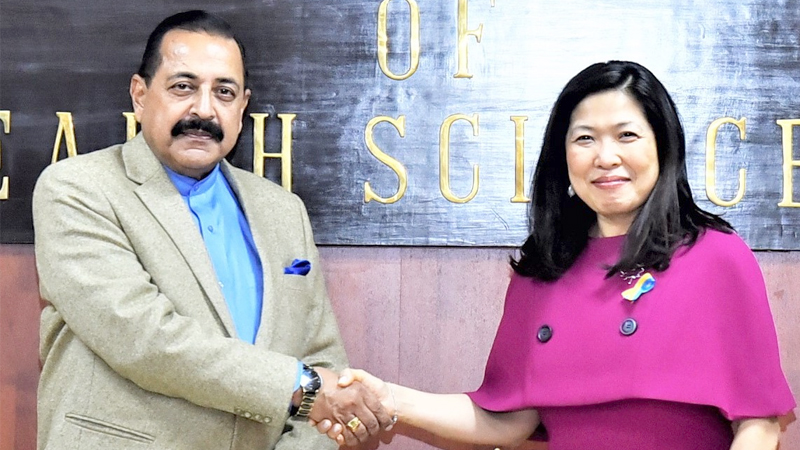 Union Minister of State (Independent Charge) Science & Technology; Minister of State (Independent Charge) Earth Sciences; MoS PMO, Personnel, Public Grievances, Pensions, Atomic Energy and Space, Dr Jitendra Singh today said that India-Canada Bilateral Center will be set up for dedicated S&T activities between India and Canada. He said, India has already established a few bilateral centres with other countries such as US, Germany, France etc. which are dedicatedly working on various useful S&T schemes for India and the partner country.

Both the sides identified the proposed Areas of Collaboration in areas like Green Technologies, Advanced Engineering and Manufacturing, Agriculture and Food Technologies, Digital Transformation, Energy Conservation and Healthcare. Discussions are on to finalize possible terms and conditions for the cooperation.

Welcoming the Canadian Delegation, Dr Jitendra Singh said that future economy is premised on high quality Research and Innovation and invited Canada to tap the unexplored areas like Ocean and Sea Missions in India.

Dr Jitendra Singh said that renewal of two MoUs between India and Canada is due and is proposed to be signed in upcoming Joint Committee Meeting in May, 2022. The first MoU relates to National Science Engineering Research Center (NSERC) Canada and it is project based scientific exchange programme along with the development of human resource in basic & Applied Sciences of direct relevance to society. The joint research publications/patents/technologies are developed by the academic Institutes. The main focus of this collaboration is to help the society with Science and Technology.

The second agreement relates to National Research Council (NRC) Canada and it is Industrial R&D project based scientific collaboration in which Industries from both the sides jointly develop prototype and commercialize it. The funding of the project was done by both the sides (Industry as well as two Government). It is milestone-based activity and the funding was returned back by the Industry as Royalty.

Dr Jitendra Singh said that National Centre for Polar & Ocean Research (NCPOR) planned to set up observational study at Canadian High Arctic Research Station CHARS during 2020-21, but could not do that due to COVID-19.  He said, NCPOR is interested to get involved with the following (not limiting) in-house research activities encompassing arctic terrestrial, freshwater and coastal marine environments. The Minister said, NCPOR could also initiate projects related to (i) atmospheric science with focus on aerosols, black carbon and air quality and (ii) genomics with stress on understanding the microbial diversity with focus on human and animal health significant organisms. It also plans to assemble a comprehensive DNA reference library of arctic life forms (fungi, plants, animals) to provide the foundation for environmental monitoring:

Dr Jitendra Singh said, DST has been also supporting Industrial R&D projects with Canada which have potential for application. Total 10 projects have been supported for Industrial R&D till date. From DBT, three joint Calls for Proposals in the areas of ‘Water for Health’, ‘Portable Diagnostics & Analyzers’, and ‘Creating Wealth from Waste’ have been launched in collaboration with IC-IMPACTS.

Moreover, under the India-Canada Centre for Innovative Multidisciplinary Partnership to Accelerate Community Transformation and Sustainability (IC-IMPACTS), since 2015 calls were launched in the following areas of cooperation- Safe and Sustainable Infrastructure, Energy conservation and Integrated Water Management, Improving Occupant Survivability in Buildings During Fires Using Innovations in Structural Engineering, Materials Science and Cyber-Physical Interfaces and Cyber-Physical Systems to Support Green Buildings in Smart Cities. He said, till date 20 projects of academic R&D have been supported by both the sides.