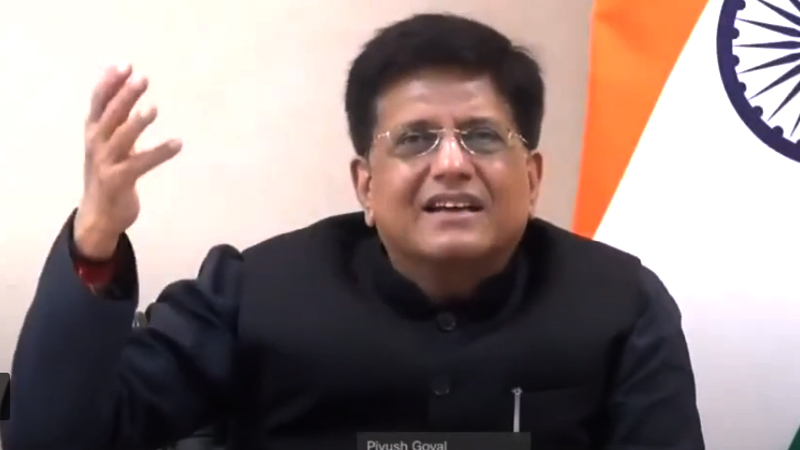 The Union Minister of Commerce & Industry, Consumer Affairs & Food & Public Distribution and Textiles, Shri Piyush Goyal has said India is poised to become one of the largest digital markets in the world. Addressing the 2nd Global Fintech Fest-2021 through video conferencing today, he said, “At 87%, India has the highest FinTech adoption rate in the world against the global average of 64%.”

“As of May 2021, India’s United Payments Interface (UPI) has seen participation of 224 banks & recorded 2.6 billion transactions worth over $68 Bn and the highest ever, more than 3.6 Bn transactions, in Aug’21,” said Shri Goyal. “Over 2 trillion transactions were processed using the AePS (Aadhar-enabled payment system) last year,” he added.

The Minister said India’s FinTech industry came to the rescue of people at the time of pandemic, by enabling them to carry out critical activities from the safety of their homes, particularly during the lockdown & the 2nd wave of Covid.

“As Prime Minister Modi says, ‘every crisis can be converted into an opportunity’, now citizens do not have to go to the banks, the banks have come to their homes and on their mobile phones,” he said.

Shri Piyush Goyal said, under the visionary leadership of the Prime Minister Shri Narendra Modi India underwent a digital transformation in Mission Mode since he announced the Jan Dhan Yojana in his first Independence Day speech on assuming office, on 15th August 2014. More than 2 crore accounts were opened under the scheme, which has been considered a world record, he said.

“JAM trinity, besides DBT, has brought in transparency, integrity and timely delivery of financial benefits and services to India’s vast population. “JAM trinity has enabled India to leverage its technical capabilities for developing Fintech sector.

The Minister said, under the National Broadband Mission soon every village in India will have high speed internet and this power can be leveraged to make India a Fintech Innovation Hub.

“I believe India is poised to become one of the largest digital markets with rapid expansion of mobile & internet networks. As India aims to become Aatmanirbhar, we want our industry & entrepreneurs to use local talent to produce globally marketable solutions, he said.

“Investment inflow in the Fintech sector which has gone up to  $10Bn since it started in 2016 has the huge potential to “Up the Game”, it will simultaneously enhance customer experience. Your strength will be augmented by the world’s 3rd largest Startup ecosystem which is hungry for growth.”

An interesting development is the emergence of embedded finance

Shri Goyal said that with the expansion of their value chains, we need to consume more and more fintech services will grow proportionally.

The Commerce Minister said, India is today one of the fastest growing Fintech markets with more than 2,100 FinTechs.

“A lot of Indian Fintech markets are unicorns and India’s market is currently valued at $31 Bn, and expected to grow to $84 Bn by 2025,” he said.