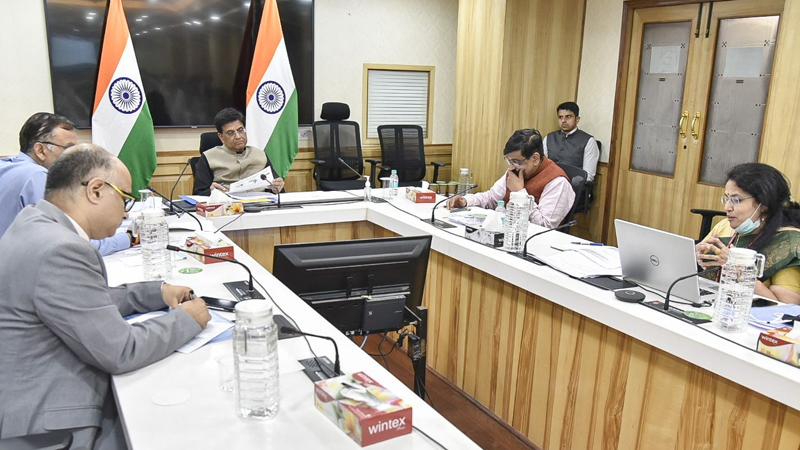 He said that India should be looking to become a global player  in producing  textiles machinery, producing at scale, producing with quality & quantity  the machinery of choice  that the world requires. He said that we are not averse to  imports but we must reduce  the import dependency of the textile machinery in India by concerted effort between Textile Engineering Industry and Government together.  He  added  that  focus on quality will help to capture bigger markets and higher productivity.

Shri  Goyal expressed hope that   a modern and upgraded textile machinery ecosystem would have a cascading impact on unorganized Indian textile industry. This would set the momentum for continuous advancement and innovation resulting into ever evolving & enhancing competitive capabilities along the value chain. He said that the machinery manufacturing facility would change the inertia of the status quo, augment the dynamics along value chain and enhance the domestic consumption and further boost the exports of higher value goods while gradually reducing the import dependency. For this it is important to synergise efforts of arms of Government between Textiles, Ministry of Heavy Industries, Digital Innovation/ adaptation possibilities in our quest of increasing efficiencies by reducing costs across manufacturing value chain,. Shri Goyal informed that  Heavy Industries Capital Goods Scheme is a pilot scheme designed to support the industry to modernize domestic technologies.  He said  that National Capital Goods Policy is a manufacturing sector policy devised by the Government of India aimed at increasing the production of capital goods from the 2014-15 value of approximately USD 31 Bn to USD 101 Bn by 2025.

Referring to India’s recent achievement of 100 crore vaccines, the Minister said that  the historic achievement  was the result a collective effort of 130 crore Indians and a proof of India’s ‘Atmanirbharta’. He  also referred to Mission  Chandrayan, which was also a breakthrough in India’s space programme. The Minister called upon the Textile Machinery Manufacturers to look at the same breakthrough of that nature in the  textiles  sector.

Shri Goyal said that  we are on a mission of transformational change.  He said when PM speaks of Atmanirbhar Bharat, it means to provide India its rightful place on the global map.  He mentioned that today, India under the leadership of Prime Minister  Narendra  Modi  feels reinvigorated, re-energised  to  think big & bold, to be more ambitious and  to set for stiff  targets. The Minister said   that government has set target of $100 bn for textiles and garment exports over next five years and Textile sector  has  an important part to play  in achieving it.  He added  that Indian Textile Engineering Industry (TEI) is at the cornerstone of moving up the manufacturing excellence wherein the domestic R&D, entrepreneurial spirit and exploration of Joint Ventures have ushered in new opportunities.

The Minister also mentioned that  history of textile production in India dates back to times immemorial. He said the simple act of adopting khadi and charkha, as propagated by Mahatma Gandhi, took the freedom movement to the masses and made charkha a symbol of Self-reliance. In many ways, this also resonates with our Prime Minister Narendra Modi’s vision for India and the spirit of ‘Aatmanirbhar Bharat’ (self-reliant India), he added.

Talking about Production Linked Incentive  (PLI ) scheme which talks of global champions and PM MITRA scheme which is trying to bring textiles clusters, Shri Goyal said that seven locations will be identified soon to encourage the industry and prepare a common infrastructure for plug and play. He also urged the manufacturers to come and join PM  MITRA scheme and set up manufacturing units by reaping its advantages.

The Minister said that there are still some challenges  like liquidity and rising costs of raw materials and freight movement for which government is actively taking many steps so that the TEI can overcome from such issues confidently. He also suggested  that there is no harm in getting international capital which will help in creation of jobs in India, add value and expand the entire textiles ecosystem.

Referring to the Centre of Excellence (CoE ) for textile machinery, the Minister informed that  CoE  at Central Manufacturing Technology Institute (CMTI), Bengaluru was established for development of shuttle less rapier looms of 450 Revolution Per Minute (RPM), towards promoting indigenous technology innovation and advance manufacturing processes. Similarly, CEFC at Bardoli, Surat was initiated by Science Engineering and Technological Upliftment (SETU) Foundation, and will have a design center, tool room, training center, and testing lab to cater to the requirements of textile engineering industry.         In Delhi, CoE at IIT-Delhi was established to focus on product development, especially with specified industry partners. Shri Goyal  also called upon the younger generation to engage in business.

The Minister expressed hope that this very initiative of bringing all the relevant stakeholders viz industry, institutions and various government ministries on the same platform will synergize our efforts and will enable the Indian TEI to enhance its energies in the areas of state-of-the-art technology R&D, ‘Atma Nirbhar Bharat’ and export promotion.

Speaking on the occasion, Minister of State for Textiles, Smt. Darshna Jardosh stated that  for textile industry, it is the golden period for investment and expand business as many   important steps like PM MITRA Parks, PLI, RoDTEP, RoSCTL have been taken to boost  the sector. She also said that textile machinery has an important part in the growth of this sector. And  not only big machinery but  small machinery also, is important  to promote handloom and handicrafts sector, which are our cultural heritage  and we need to preserve this legacy.

The interaction was aimed  at devising possible strategy to develop a facilitating Ecosystem for growth of the Textiles Engineering Industry (TEI) in India under Make in India in order to Compete globally in all industry segments on strength of Technology and scale, Initiatives towards Atmanirbhar Bharat:  Meet 75% of domestic demand by 2026-27 and Cost reduction for the Textile Manufacturers and Enhancement of Value exports.