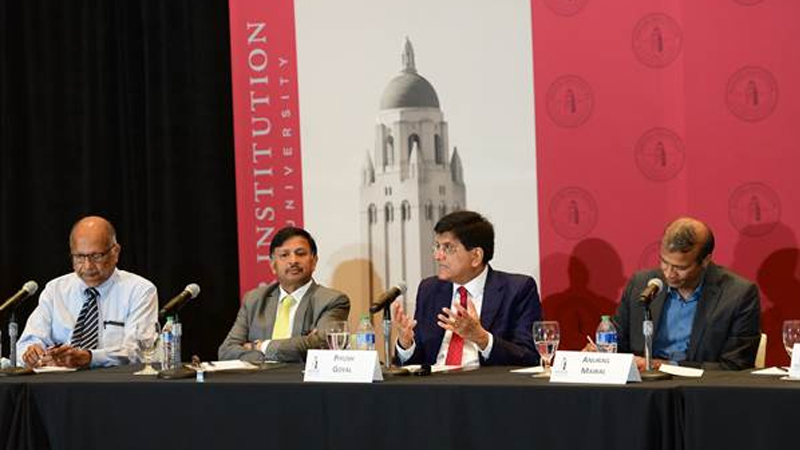 Union Minister for Commerce and Industry, Consumer Affairs, Food and Public Distribution and Textiles, Shri Piyush Goyal today said that ‘India’ meant ‘opportunities’ and added that this is not just India’s decade, it is India’s century. He was interacting with the faculty and students of the Stanford Graduate School of Business in Sanfrancisco today.

Shri Goyal observed that the last few years have been well spent by India in creating the foundation in which the country can rapidly transform, grow its economy, improve its systems, engage with technology and learn from the best in the world. The Minister also stressed that India has been striving to ensure that every citizen of the country, every child born in the nation has a right to a good quality life and a bright future.

Referring to India’s exports which have already crossed USD 675 billion in the last fiscal, he said that the nation was now aspiring to take international trade to USD 2 Trillion by 2030 and added that by the time India would celebrate the 100th anniversary of its independence it would be a USD 30 trillion economy. That is the kind of opportunity that India presents to the world. This is not just India’s decade, it is India’s century, he added.

Expressing his faith in the youth of India who are rapidly turning into entrepreneurs and startup champions, Shri Goyal said that India’s new education policy was giving a fillip to liberal education and looking at deeper collaborations with the best schools in the world.

The Minister said that India’s Prime Minister, Shri Narendra Modi articulated his vision and his plans for India’s future based on some sound management principles. He cited the example of LED lighting revolution and explained that in 2014, the Prime Minister placed great focus on energy conservation to ensure sustainability, to reduce the burden of our investments into the power sector and to reduce energy bills of the common man and launched an LED lighting program in 2015.

Shri Goyal opined that the Prime Minister’s decision to withdraw the subsidy for purchase of the very expensive LED lamps was the defining moment in India’s bid to promote LED lighting. The government then engaged extensively with all the stakeholders, from importers to distributors to suppliers, successfully driving down the cost of an LED bulb by 85% in the very first year of the program, partly by bringing in economies of scale and partly by effectively solving some of the issues faced by suppliers, he said.

He added that India had successfully used several management principles such as root cause analysis, innovative financing models, economies of scale etc to ensure the success of the LED lighting program. It may be noted that India has been able to save around 80 million tonnes of CO2 emissions because of that program. Shri Goyal also added that India, which was once a net importer of LED lamps now has several manufacturers of high-quality LED lamps which is exported all over the world.

Highlighting the massive transformation brought about by a single program, Shri Goyal said that India was now planning hundreds of such transformative programs. Speaking of India’s Fintech success, the Minister said that nearly 40 percent of all digital transactions were happening out of India today, with even small vendors accepting digital payments. 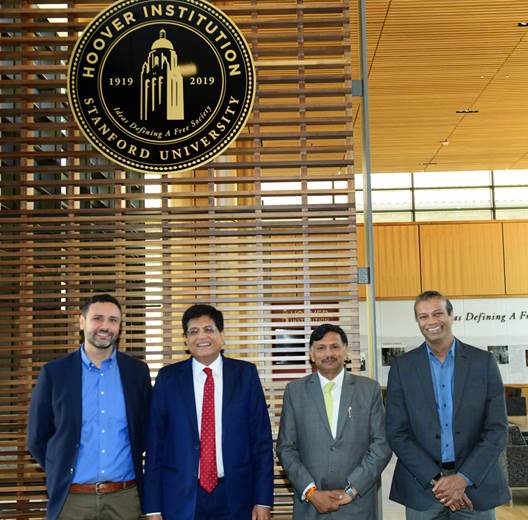 Speaking of the incredible opportunities offered by India to the world, Shri Goyal invited the students of Stanford to engage with India and work with a billion plus people with great aspirations.