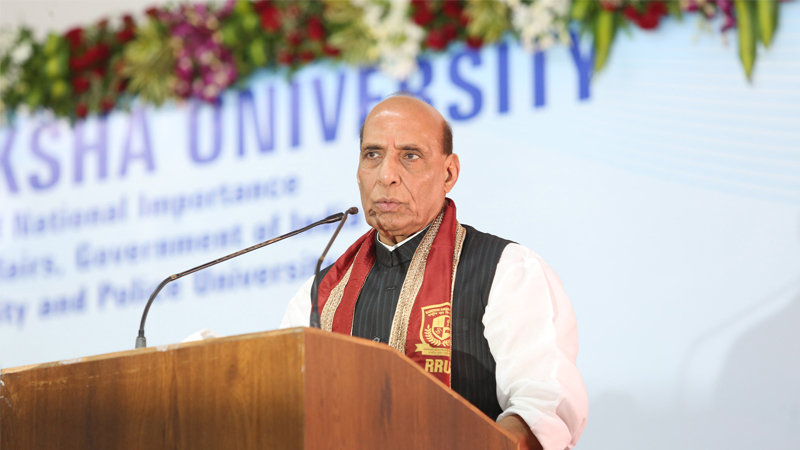 “Government has adopted a holistic approach to strengthen all aspects of national security,” said Raksha Mantri Shri Rajnath Singh during the convocation ceremony of Rashtriya Raksha University (RRU) in Gandhinagar, Gujarat on October 17, 2022. The Raksha Mantri emphasised that national security encompasses security of land and sea borders, air space, cyber, data, space, information, energy, economy & environment and it is essential for a sovereign nation to safeguard these elements. He assured the people that the nation is well equipped to deal with all security challenges.

Shri Rajnath Singh, however, maintained that it has become increasingly difficult to differentiate between external and internal security threats as hybrid warfare has almost eliminated this distinction. He added that the situation has become even more complicated as latest technological advancements have expanded the nature of threats to national security.

“New kinds of threats are coming to the fore which have blurred the line between internal & external security. Besides terrorism, cyber war and information war are the new forms of security threats. In addition, there are problems like human trafficking and money laundering which are different in appearance, but are related to one other. All the agencies must work in an integrated manner to deal with these challenges,” the Raksha Mantri said.

Shri Rajnath Singh pointed out that India has always withstood the invasions and threats to national security, with no other nation possessing such a rich tradition of national self defence. He stated that there is a need to outgrow the impact of slave mentality which has undermined its rich tradition of self-defence and security.

With a number of RRU students in attendance, the Raksha Mantri underscored the importance of human values, terming it as the most important aspect that builds a person’s character. He urged the students to stay connected with human values and lay equal emphasis on their building character.

The Raksha Mantri commended the leadership of Prime Minister Shri Narendra Modi in making India the fifth largest economy of the world, asserting that India has the potential to become the largest economy by 2047. He appealed to the citizens to play their part in making India one of the most powerful nations in the times to come.

Shri Rajnath Singh concluded his address by congratulating all graduating students and their parents and appealed to them to contribute towards nation building. He also appreciated the efforts and contributions of the faculty and staff of RRU in the success of the university.

Addressing the gathering, Chief Minister of Gujarat Shri Bhupendrabhai said the RRU is a premier institute imparting training in the field of security and fulfilling the vision of the Prime Minister. He appealed to all graduating students to contribute towards ensuring the security of the nation. The Chief Minister expressed happiness that the University is expanding to new locations in the near future.

Delivering the welcome address, Vice Chancellor of RRU Professor (Dr) Bimal N Patel presented the annual report. He informed that nearly 1,000 students are enrolled in the university in 26 programmes. Additionally, national security guard personnel and personnel from Armed Forces, state police services, central armed police forces and others have benefitted from the training programmes of the university. The Vice Chancellor also shared the future plans of the university for training and capacity building.

During the convocation ceremony, degrees were conferred on students pursuing various courses of study at the university. Faculty and other personnel of the university, alumni, students and their parents were present for the occasion.