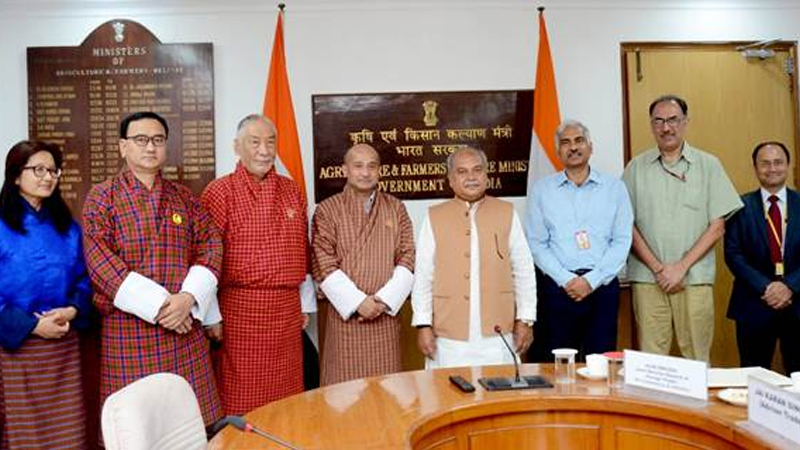 Bhutan’s Minister of Economic Affairs, Shri Loknath Sharma called on the Union Minister for Agriculture and Farmers Welfare Minister Shri Narendra Singh Tomar in New Delhi today. During this meeting, Shri Tomar said India has extended all-out cooperation to Bhutan in the Agriculture sector and will continue to help in every possible way.

Welcoming the Bhutanese delegation, Shri Tomar expressed happiness over the longstanding friendly relations between the two countries, and said that Bhutan was the first country Shri Narendra Modi visited after becoming the Prime Minister, which underlines our strong relationship.

“India has been generously cooperating to enhance this friendship. The trade partnership between the two countries has also strengthened and India is in favour our ties should deepen further. The Union Ministry of Agriculture and Farmers Welfare and other Ministries have been taking decisions constructively towards Bhutan. We are also working on opening up Indian markets for various agricultural products from Bhutan. On the request of Bhutan, it has been allowed to export ginger to India and potato export for one more year,” said Shri Tomar.

He assured that both the countries will continue to work together in the Agriculture sector and keeping in view the internal and external situation, we will take a positive approach to Bhutan’s request as and when required.

The Bhutan Minister Shri Sharma thanked India for its cooperation in various matters including the supply of sugar to Bhutan. He said that the issues of Agriculture are important for us and that he has come to India to enhance the friendship between the two countries. Shri Sharma expressed his thanks for India’s support to Bhutan’s request regarding ginger and potato exports. He urged that Bhutan’s request for export of arecanut (Supari) to India should be considered at the earliest and trade in fruits and vegetables should continue in the present form and bilateral ties should grow through the free trade.