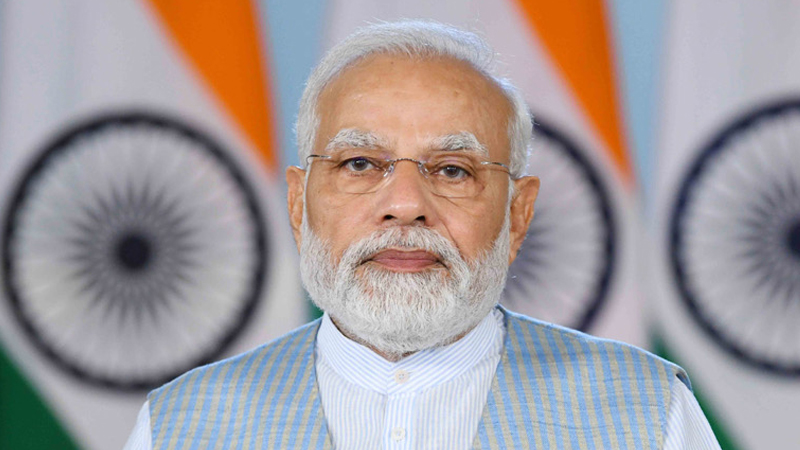 The Prime Minister, Shri Narendra Modi has addressed the National Conference of Labour Ministers of all States and Union Territories via video conferencing today. Union Ministers Shri Bhupender Yadav and Shri Rameshwar Teli and Labour Ministers of States were among those present on the occasion.

The Prime Minister began his address by bowing down to Lord Tirupati Balaji. The Prime Minister emphasised that India’s labour force has a huge role to play in realizing India’s dreams and aspirations to build a developed nation in the Amrit Kaal, and with this thinking, the country is working continuously for crores of workers from the organised and unorganised sector.

The Prime Minister reiterated the various efforts by the Government like Pradhan Mantri Shram-Yogi Maandhan Yojana, Pradhan Mantri Suraksha Bima Yojana, Pradhan Mantri Jeevan Jyoti Bima Yojana that have given a kind of security cover to the workers. These schemes have assured the labourers of the recognition of their hard work and contribution. The Prime Minister also said, “The Emergency Credit Guarantee Scheme, according to a study, saved 1.5 crore jobs during the pandemic.” He continued “We are seeing that just as the country supported its workers in their time of need, in the same way, the workers have put their full strength into recovering from this epidemic.” The Prime Minister said that today India has once again become the fastest growing economy in the world, so a lot of credit goes to our workers, he said.

The Prime Minister pointed out that the e-Shram portal is one of the key initiatives to bring the labour force into the ambit of social security. In just one year, about 28 crore workers from 400 areas have been registered on the portal. This has especially benefited construction workers, migrant labourers, and domestic workers. He requested all the ministers to integrate state portals with the e-Shram portal.

He further added that in the last eight years, the Government has taken the initiative to abolish the laws from the period of slavery that reflect the slavery mentality. “The country is now changing, reforming, simplifying such labour laws.”, the Prime Minister said. “With this in mind, 29 labour laws have been converted into 4 simple labour codes”. This will ensure the empowerment of workers via minimum wages, job security, social security, and health security, he added.

The Prime Minister reiterated the need to change as per the changing scenario. He emphasised the need to take full advantage of the fourth industrial revolution by taking quick decisions and implementing them rapidly. In the light of platform and gig economy and online facilities, the Prime Minister stressed the need to be alive towards the emerging dimensions of work. “Right policies and efforts in this area will help in making India a global leader”, he said.

The Prime Minister highlighted that the country’s Labour Ministry is preparing its vision for the year 2047 in Amrit Kaal. Reiterating that the future needs flexible workplaces, a work-from-home ecosystem, and flexible work hours, the Prime Minister said that we can use systems like flexible workplaces as opportunities for women’s labour force participation. Recalling his address to the nation on the 15th of August from the ramparts of the Red Fort, the Prime Minister said that he has called for the full participation of the nation’s women power. He added, “By making the right use of women power, India can achieve its goals faster.” The Prime Minister also emphasised the need to think in the direction of what can be done for women in the newly emerging sectors in the country.

Remarking on the demographic dividend of India, the Prime Minister said that India’s success in the 21st century will depend on how well it is used. He added, “We can take advantage of global opportunities by creating a high-quality skilled workforce.” The Prime Minister also highlighted that India is signing migration and mobility partnership agreements with many countries of the world and urged all the states of the country to take advantage of these opportunities. “We have to increase our efforts, learn from each other”, he said.

The Prime Minister, while making everyone aware of the fact that our building and construction workers are an integral part of our workforce, requested everyone present on the occasion to make full use of the ‘cess’ that has been arranged for them. “I have been told that out of this cess, about Rs 38,000 crore has still not been utilized by the states”, the Prime Minister said. He urged everybody to pay attention to how ESIC together with the Ayushman Bharat scheme can benefit more and more workers. The Prime Minister concluded his address by assuring everyone that these collective efforts of ours will play an important role in revealing the true potential of the country.

The two-day conference is being organised by the Union Ministry of Labour & Employment on 25-26 August 2022 at Tirupati, Andhra Pradesh. The conference is being convened in the spirit of cooperative federalism to discuss various significant labour-related issues. It will help create further synergy amongst the Centre and State Governments in formulating better policies and ensuring effective implementation of schemes for the welfare of workers.

The conference will have four thematic sessions on integrating e-Shram portal for onboarding social security schemes to universalize social protection; Swasthya se Samriddhi for improving medical care through ESI hospitals run by State Governments and integration with PMJAY; framing of rules under four Labour Codes and modalities for their implementation; Vision Shramev Jayate @ 2047  with focus on just and equitable conditions of work, social protection to all workers, including gig & platform workers, gender equality at work, among other issues.