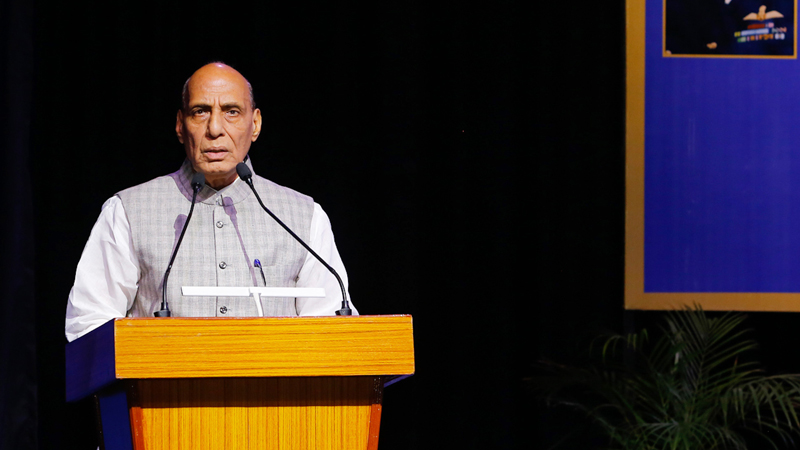 Raksha Mantri Shri Rajnath Singh has exhorted the Indian Air Force (IAF) to become an Aerospace Force and be prepared to protect the country from the challenges of the future. He was delivering the keynote address for the 37thAir Chief Marshal PC Lal Memorial Lecture in New Delhi on May 05, 2022, attended by Chief of the Air Staff Air Chief Marshal VR Chaudhari; President of the Air Force Association Air Chief Marshal RKS Bhadauria (Retd) and senior officers of the IAF, both serving and retired.

Shri Rajnath Singh called for technology evolution, gaining expertise and human resource management to defend the country against space-guided attacks and protect the space assets. “Change is the law of nature. It is eternal. This law is applicable to war as well. As students of military affairs and geopolitics, it is our duty to keep anticipating the nature of future wars. Steps are being taken by our adversaries towards military use of space. This is likely to have an adverse effect on our interests. We, therefore, need to identify and be fully prepared for the evolving security challenges,” he said.

The Raksha Mantri added that the nature of future wars can be assessed through a closer look at the situation in Syria, Iraq & Afghanistan and the recent Ukrainian conflict. “Although these trends are suggestive, but we can gain a deeper understanding by correlating them with our local threats,” he said. Shri Rajnath Singh voiced the Government’s resolve to provide specialised skills training to the Armed Forces personnel, especially IAF, in latest technology to make them future ready.

Highlighting the importance of technology in wars, Shri Rajnath Singh said, the use of technology has seen an unprecedented increase in recent times. He, however, stated that expensive platforms/weapon systems do not alone ensure victory; it is their employment which gives an edge in wars. “Be it precision guided munition, unmanned aerial vehicles or manpack anti-tank weapons, their deployment in any future war will be as critical as it had been in the past. Technology is a force multiplier, but without innovative deployment, state-of-the-art equipment will be a mere display,” he added.

The Raksha Mantri also paid glowing tributes to Air Chief Marshal PC Lal who was the Vice Chief of the Air Staff during the 1965 war and had served as the 7thChief of the Air Staff during the 1971 war. Describing him as a visionary, Shri Rajnath Singh said, Air Chief Marshal PC Lal’s outstanding leadership proved to be a decisive factor for India’s victory and for the liberation of Bangladesh in 1971. The Raksha Mantri shared the glimpses of the life of Air Chief Marshal PC Lal, especially his invaluable contributions during the 1965 and 1971 wars. He said, these reflected the way IAF had paved the way to victory in the last few decades despite challenges and difficult operating conditions. It also symbolised the importance of integration and jointness.

Shri Rajnath Singh asserted that through the process of integration structures can be built for bringing together the forces and greater synergy can be established between them through joint vision, training, planning and execution of operations. “The ongoing process of integration of the Armed Forces is aimed at not only increasing the combined capability, but also efficiency. There have been deliberations in the Armed Forces regarding the envisaged changes. This consultative process will continue till the implementation of the reforms. We have to keep in mind that its long term success will depend on the vision of the planners just as much as it depends on those who implement it. I have full faith that in future more unity will be established not just ideologically, but also in action,” he said.

Sharing his views on the need to achieve ‘Aatmanirbharta’ in defence, the Raksha Mantri described self-reliance as essential for not only building the domestic capacity, but also for safeguarding the sovereignty of the country. “Our past experiences have taught us that India cannot depend on imports for its security and security. Recent conflicts, especially the situation in Ukraine, have told us that not just defence supplies, but commercial contracts are also prone to be affected when it comes to national interests,” he added.

Shri Rajnath Singh stressed that achieving self-reliance in defence will have middle and long-term benefits as it will help in building the foundation of a robust industrial base not only in the defence sector, but in every sphere of the industry. He listed out some of the recent initiatives taken by the Government, terming them as building blocks of a self-reliant structure which will empower the domestic manufacturers and help India emerge as a net exporter of defence equipment.

The Raksha Mantri reiterated that the Government is leaving no stone unturned to ensure the safety and security of the people of the country. He added that India has emerged as the foremost responder for out of area contingencies across the region. He lauded the Armed Forces and other organs of the State for their combined contribution in achieving the objective.

On the occasion, the Raksha Mantri also released a book titled ‘INDO-PAK WAR 1971- Reminiscences of Air Warriors’. The book comprises 50 Swarnim articles penned by the veterans who have shared their experiences in detail. The book has been edited by Air Marshal Jagjeet Singh and Group Captain Shailendra Mohan.