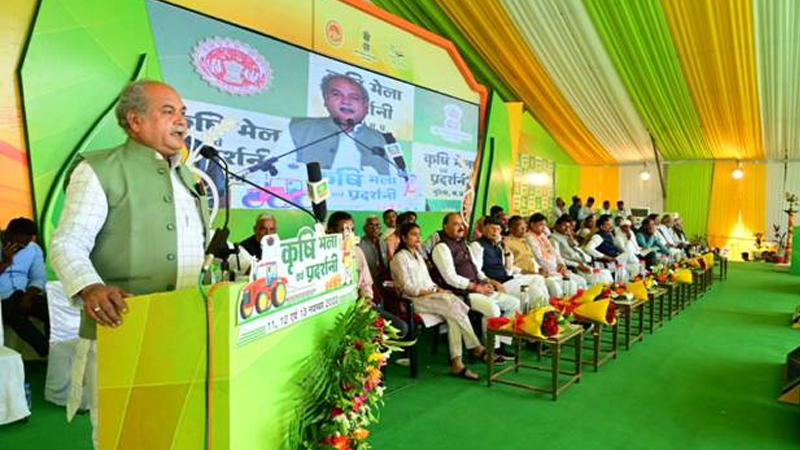 A 3-day mega agricultural fair, exhibition and training programme, organized by the Union Ministry of Agriculture and Farmers Welfare, at Morena, Madhya Pradesh concluded today. On the third and final day also thousands of farmers participated in it. The chief guest of the closing ceremony was Member of Parliament, Shri V.D. Sharma, and the function was presided over by the Union Minister for Agriculture and Farmers Welfare and local MP, Shri Narendra Singh Tomar. Madhya Pradesh Agriculture Minister Shri Kamal Patel and Minister in-charge of Morena, Shri Bharat Singh Kushwaha were special guests. On this occasion, Shri Tomar said that this Krishi Mela would prove to be a milestone for the Chambal-Gwalior region in terms of improved agriculture, while Shri Sharma complimented Prime Minister Shri Narendra Modi and Agriculture Minister Shri Tomar for taking several concrete measures for the overall development of the agriculture sector and said that small farmers are benefiting from the schemes of the government, they are moving ahead.

Union Minister Shri Tomar thanked the scientists associated with agricultural institutions across the country including the Indian Council of Agricultural Research (ICAR) for guiding thousands of farmers by training them in this agriculture fair. He also lauded the contribution of the MP state government and district administration and officials of the Union Ministry of Agriculture in organizing the event. The Union Minister also complimented various agricultural institutions and companies for setting up the stalls. Shri Tomar said that our country and also the Chambal region are agricultural dominant. The more we make agriculture sector stronger, the more powerful the Chambal region and the country will become. There is so much power in the agricultural economy that if there is any crisis in the country, then the agriculture sector can be its saviour.

Shri Tomar said that earlier agriculture related schemes were production oriented but today policies are being implemented on increasing the farmers income. Ever since the Prime Minister Shri Narendra Modi said that the income of farmers should be more than doubled, since then the Central and State Governments and farmers, all together have made efforts in this direction. Saffron is cultivated in Srinagar (Kashmir), the farmers there earlier used to sell saffron at Rs 1 lakh per kilo, there the Central Government developed a saffron park and increased the facilities, so now saffron sells at Rs 2 lakh per kg. As a result of the Prime Minister’s vision, the income of farmers has increased ranging from double to eight times. Our agricultural scientists have done documentation of 75,000 farmers across the country, which is public, – farmers, themselves, are saying that their income has more than doubled due to the policies of the Modi Government.

The Union Minister said that today there is a need to reduce the cost of farming and increase the income of the farmers. The quality of the products should also be of high quality. Water should be used less in agriculture, more should go towards micro-irrigation. There should be less use of urea, DAP in agriculture, while the use of biofertilizer and nano urea should be increased. Organic and natural farming should be promoted. Natural farming will also increase the usefulness of cows. If we make fertilizer from cow dung and urine, then money will be saved and the production will be good for health. Shri Tomar said that there are 86 percent small farmers in the country, for whose upliftment the government has planned to set up 10,000 new FPOs and with an investment of Rs 6,865 crore, work is being done expeditiously in this direction. To meet the shortage of oilseeds and reduce import dependence, the government has adopted the Oil Palm Mission, on which Rs.11,000 crores is being spent.

Exhorting the farmers of the region, Shri Tomar said that today the farmers need knowledge, not water. Welcoming farmers from all over the country, he said farmers of the Chambal region will benefit from their knowledge as well as expertise. If farmers use technology, then the new generation will also draw its benefit and employment opportunities will also be created in the villages. Member of Parliament Shri Sharma said that this agriculture fair, organized under the leadership of Union Minister Shri Tomar, will prove to be very helpful for advanced farming. In the fair, efforts have been made to make the farmers proficient by bringing the experiments done across the country among the farmers. Learning from what the farmers witness here, they will try to do new experiments in farming. Under the leadership of Prime Minister Shri Modi and Shri Tomar, new techniques are being used in agriculture, farmers are being updated. After assuming power, PM Modi vowed to double the income of the farmers and the Ministry of Agriculture has implemented it across the country. Shri Sharma said that good work is being done for the farmers even in Madhya Pradesh under the leadership of Chief Minister Shri Shivraj Singh Chouhan, its proof is that the state has bagged the Krishi Karman Award for 7 times. He said that irrigation facilities have increased, power crisis has also been overcome, while market is also available for the farmers. There is road connectivity in each and every village of Madhya Pradesh. Shri Sharma said that the Prime Minister has worked to empower the farmers even during the Covid crisis, while concerned about the farmers welfare, he has done the work of giving strength to every farmer with the Samman Nidhi.

MP Agriculture Minister Shri Patel said that India is a country of villages and farmers. M.P. is also primarily agricultural. When Atal ji became the Prime Minister for the first time, he focused on the development of villages, earmarked 68 percent of the budget for the villages, similarly the Modi government took care of the farmers and has rolled out such schemes which would double their income and make farming a profitable enterprise. In order to take the farmers forward, the state government is giving loans to the farmers at zero percent interest. Worm damage was also classified as a disaster. Madhya Pradesh is the state giving maximum crop insurance claims. The government has also included Van Gram in insurance. Several efforts have been made to increase the income of the farmers. All this systematic change is a result of a change of power.

On the last day of the fair, farmers were trained on subjects like natural farming, crop diversification and soil testing, dairy entrepreneurship, organic fertilizers, mushroom production, fish production, goat rearing, animal nutrients, water conservation, millet production and processing and floriculture. On this occasion, newly constructed seed buildings of KVK were also inaugurated. Many public representatives and office bearers of the region were also present in the programme.