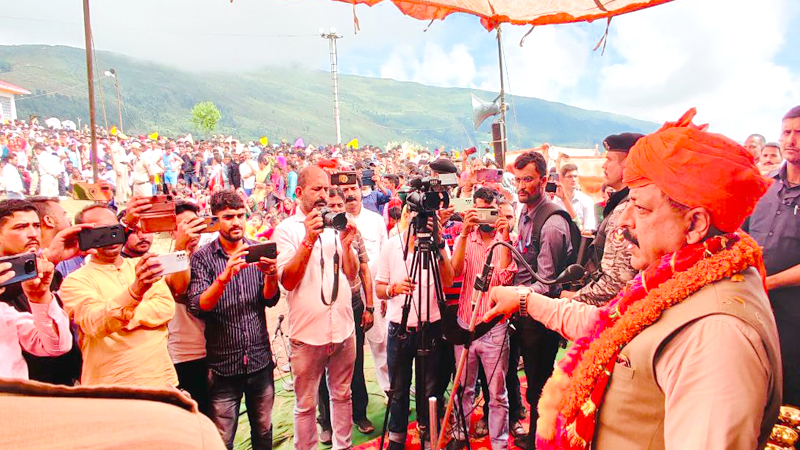 Describing Udhampur, Kathua, Doda as among the most developed Lok Sabha constituencies of the country during last eight years of the Modi government,  Union Minister Dr Jitendra Singh said today that during this period the development has reached remotest parts of the region which stood neglected during the earlier regimes.

Addressing a massive gathering after paying obeisance at the Sankri temple at Pancheri near here, Dr Jitendra Singh said, this was possible because development without any vote consideration has been our motto under Prime Minister Modi. He said, we have followed the culture of providing what was required at whatever place so that there is equitable development of every area and in doing so we have simply followed the bottomline of reaching out to the most needy pockets of region and delivering justice to all, appeasement to none, without any considerations of vote  politics and without thinking as to whether the people of that area vote for us or not.

On the occasion, Dr Jitendra Singh also dedicated to the public a Community Hall constructed from MP LAD funds.  He said, during his last visit to Pancheri, there were three or four main demands, most of which he had sought to fulfil and one of these was the demand for a Community Hall.

The other demand, he said, was to develop Pancheri  as a tourist spot and added that this demand has been fulfilled because Pancheri is selected among the list of places of J&K which are to be included in the tourist itinerary.  He said, the other demand for having a tourist hub has also been fulfilled for the construction of these tourist hubs has started while the installation of a new Power Project will address the grievance of long hours of power cuts which the people had to face earlier.

While referring to the pamphlet based on 75 important developmental works done in Udhampur, Kathua, Doda Lok Sabha constituency during the last eight years, Dr Jitendra Singh said, the hallmark has been that not only several national projects were initiated and several held up projects resumed, but there were historic projects brought here for which no public demand for this has been made, but as elected representative needs we tried to study and do research to decide which area had the potential for which project.

Accordingly, Dr Jitendra Singh said, North India’s first River Rejuvenation Project was started at Udhampur river Devika and India’s longest express road corridor between Delhi and Katra will be completed in the next one year.  Similarly, the country’s 2nd Vande Bharat express train was started between Katra and Delhi and the world’s highest railway bridge is nearly to complete in Reasi for which lot of efforts had to be made to come out with appropriate Rail alignment which could negotiate the hilly terrain to connect Kashmir with the rest of India.

Udhampur, Kathua, Doda is possibly the only Lok Sabha constituency in the country, said Dr Jitendra Singh, which got three centrally funded Medical Colleges in a short span of time.