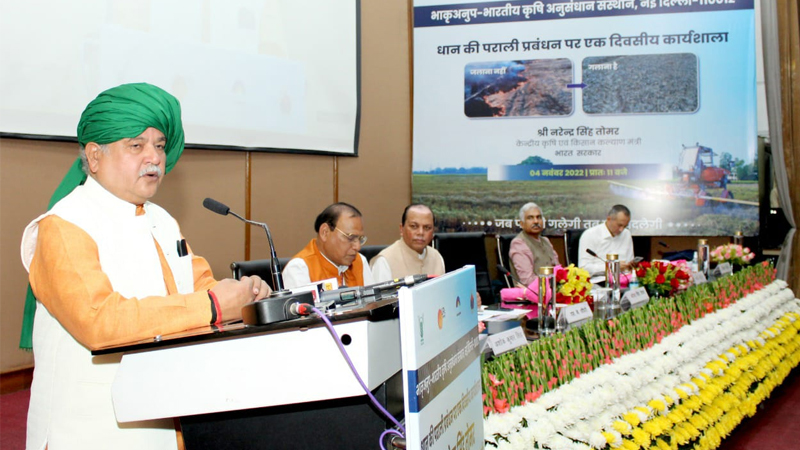 Under the guidance of the Union Ministry of Agriculture and Farmers Welfare, the Pusa Decomposer developed by the Indian Agricultural Research Institute (IARI) for efficient management of paddy stubble with the aim of better and optimum utilization by the farmers was held in Pusa, Delhi today. The workshop was organized under the leadership of Union Minister of Agriculture and Farmers Welfare Shri Narendra Singh Tomar, in which hundreds of farmers were present and thousands of farmers also joined virtually through 60 Krishi Vigyan Kendras (KVKs).

The technology of decomposer has been transferred by Pusa Institute to other companies including UPL, through which it is being produced and made available to the farmers. Through these, the use and demonstration of Pusa Decomposer in the last 3 years have been done in Uttar Pradesh in 26 lakh acres, 5 lakh acres in Punjab, 3.5 lakh acres in Haryana and 10 thousand acres in Delhi, which have yielded very good results. This decomposer is cheap and easily available across the country.

In the workshop, Union Minister Shri Tomar said that proper management of paddy stubble is the collective responsibility of all to prevent pollution. He said, concerned State Governments- Punjab, Haryana, U.P. and Delhi were provided more than Rs 3 thousand crore for stubble management by the Centre. Punjab was allocated the maximum fund of about Rs 1450 crores, while Haryana got Rs 900 crores, UP Rs 713 crores and 6 Crore rupees to Delhi.  Out of this, about one thousand crore rupees are left with the states including Rs 491 crore with Punjab alone.

Shri Tomar said, a comprehensive solution to this problem is possible with optimum utilization of 2.07 lakh machines made available to the states for stubble management with the assistance provided by the Centre. Also, if the Pusa Decomposer developed by the Pusa Institute is used, the fertility of the cultivable land will also increase along with the solving the problem.

Shri Tomar said that more important than political discussion on paddy straw is to discuss its management and how to get rid of it. He said, the problem of stubble burning is serious and on this issue levelling allegations and counter allegations are not justified. Be it the Central or State governments or farmers, everyone has the same objective that agriculture should flourish in the country and there is prosperity for farmers. The Minister added that burning of stubble causes harm to the environment as well as the people and therefore a way should be found to deal with it and follow that path. With this, the soil will not only be safe, pollution will also be reduced and the farmers will be benefitted a lot, Shri Tomar added. 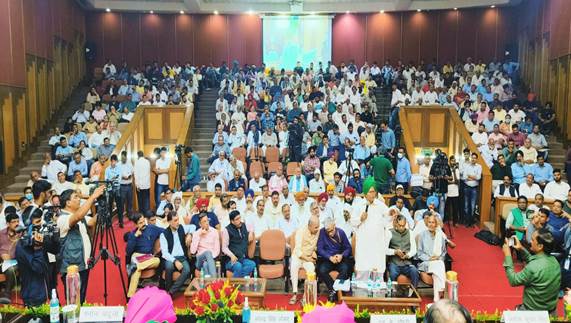 In the workshop, some farmers from these states, who used Pusa Decomposer, shared their positive experiences, while the licensee also shared the benefits of Pusa Decomposer with the farmers. Union Agriculture Secretary Shri Manoj Ahuja, DDG (NRM) of Indian Council of Agricultural Research, Dr. S.K. Chaudhary, Director, Indian Agricultural Research Institute, Dr. Ashok Kumar Singh also addressed the workshop. Shri Tomar and the farmers who came to Pusa, while visiting the field, saw the live performance of the Pusa decomposer and inquired about the stalls.

The Central Government is serious about stubble management and several meetings have been held with all the stakeholders in this regard. On 19th October, in the presence of Union Minister Shri Tomar, Environment, Forest and Climate Change Minister Shri Bhupendra Yadav and Animal Husbandry, Fisheries and Dairy Minister Shri Parshottam Rupala, discussions were held with the concerned state governments and necessary guidelines were  issued in this regard. Earlier on September 21, a meeting was held with the states under the chairmanship of Shri Tomar. Several meetings were held at the level of Agriculture Secretary and Joint Secretary also and suitable advice and instructions had been given to the states. Today’s workshop is a part of this series, in which Shri Tomar called upon the state governments, farmers, agricultural scientists to work together for stubble management. 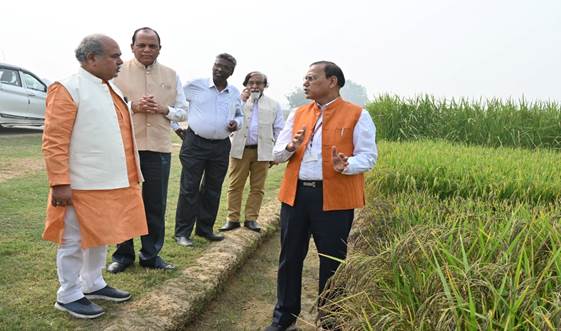