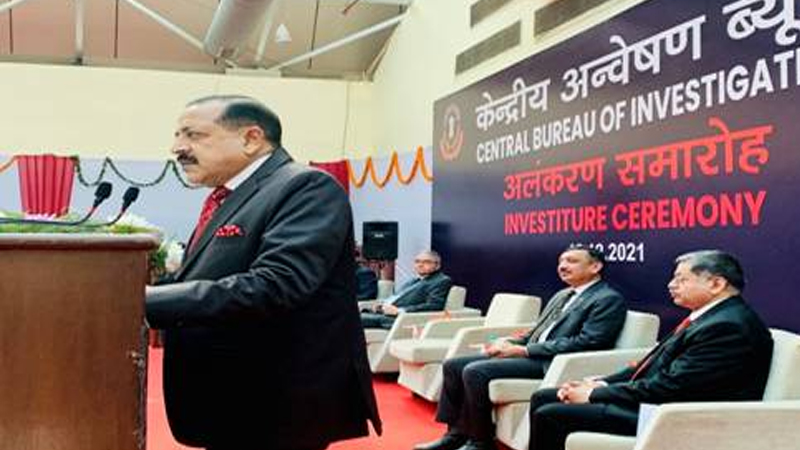 Speaking at the Investiture Ceremony at CBI Headquarters here, Dr Jitendra Singh said, zero-tolerance for corruption, transparency and citizen centricity are the three main Mantras that determine the administrative outlook of the government headed by Prime Minister Narendra Modi. He said, irrespective of ideological beliefs, it is the collective responsibility of all to strengthen institutions like CBI, as these institutions also contribute to strengthening the nation’s resolve to achieve the ultimate goal of incorruptibility in society.

Dr Jitendra Singh said, to fulfil the commitment of zero tolerance against corruption and unaccounted money, a range of initiatives have been taken by the Modi government over the last 7 years. He said, soon after taking oath as Prime Minister on 26th May, 2014, the very first cabinet meeting chaired by Prime Minister Modi took the decision to form a Special Investigation Team (SIT) to unearth the black money. He said, since 2014, there have been a series of reforms including the Amendment in the Prevention of Corruption Act 1988, setting up of the office of Lok Pal and instantly placing all the government decisions including the ACC decisions in public domain for enhanced transparency. The Minister pointed out that more than 1500 laws have been abolished in the past years and various rules and regulations have been simplified.

Expressing concern over certain States withdrawing the general consent to CBI to investigate cases but nevertheless holding on the prerogative to give selective consent where it suits them, Dr Jitendra Singh called for wider introspection by the polity, the society and the nation at large whether this is the kind of propriety which is to be followed by a ruling government in a State. He emphasized that these State Governments have to come clear and state whether they trust CBI or not, or whether they trust CBI selectively as they continue to give selective consent in cases which suit them.

The Minister called upon these State governments to rethink on the decision of withdrawal of general consent to CBI to investigate cases. The Minister reminded that many cases are also referred to CBI by the States under public pressure which indicates that people have greater trust in CBI. Similarly, complex and urgent cases are also assigned to CBI by the judiciary on many occasions, he added. Drawing attention to the Prime Minister’s address in October this year, wherein he said, “New India is no longer ready to accept that corruption as part of the system”, DrJitendra Singh said, efforts are afoot at a fast pace to make the system transparent, efficient and smooth. He said, prevention of Corruption Act, 1988 was amended after 30 years in 2018 to introduce a number of new provisions including criminalizing the act of giving bribe also in addition to taking bribe and at the same time putting in place an effective deterrence for such actions by individuals as well as corporate entities. He said the commitment of the present government is to bring in more transparency, more citizen centricity and more accountability in governance and is indicated by its decisive initiatives to operationalize the institution of the Lokpal in the country to check corruption at high places.

Speaking on the occasion, Director CBI Shri Subodh Kumar Jaiswal congratulated all the CBI awardees. Shri Jaiswal reiterated unflinching commitment of CBI to work towards the national goal of Zero Tolerance against Corruption stating that CBI has over the years evolved into a multidisciplinary premier investigating agency of the country inducting processional from different fields. Shri Jaiswal also stressed that CBI is trusted by Courts, Governments and people at large. For every serious crime, there is always a clamor for CBI investigation. The success of CBI is exemplified by the fact that CBI has over the years been able to achieve nearly 70% conviction rate despite of the fact that accused are able to get best of legal support. He underlined that CBI is committed to take forward the great legacy and adapt with time. 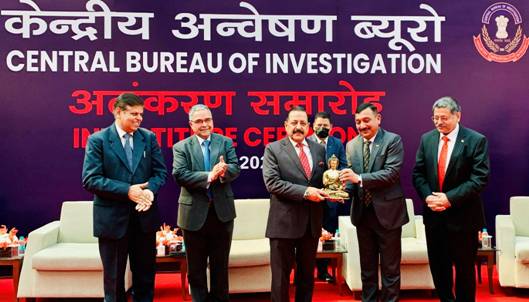 Shri Jaiswal also delved on “Vision 75” of CBI in the context of Azadi ka Amrit Mahotsav being observed in the 75th year of India’s Independence. He informed that CBI has initiated a comprehensive internal process of modernization, upgradation of capacities, setting higher benchmarks for investigation and preventive vigilance and for leveraging cutting edge capabilities to combat new age crime. DCBI added that CBI has identified 75 practices, which need to be discouraged so as to enhance efficiency of the organization.

Dr.Jitendra Singh, presented the Police Medals for Meritorious Service to 47 CBI officials and called upon the decorated officers to rededicate themselves to the service of the nation with best of their skills and talent.