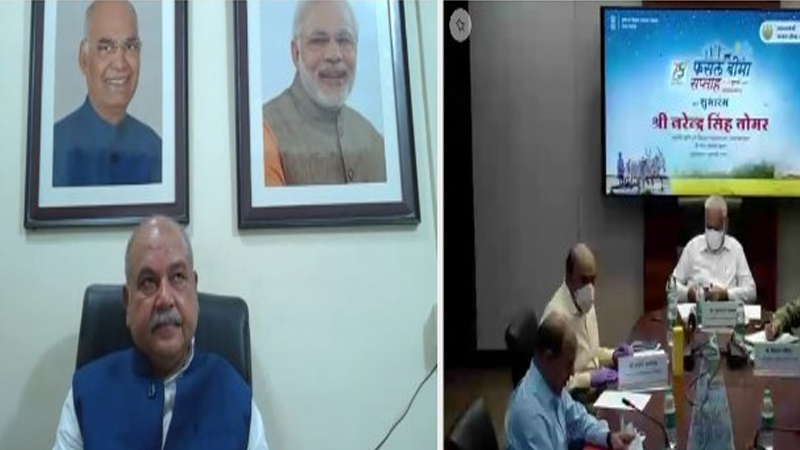 Speaking at the launch event, Union Minister Shri Tomar said that Fasal Bima Yojana aims to provide security cover to each farmer. He also announced that the scheme achieved milestone figure of Rs 95,000 crore of claims paid to farmers.

The Minister said that state governments and insurance companies have an important role in the implementation of PMFBY. The result of their hard work is that in the last 4 years, premium amounting to Rs 17 thousand crores was deposited by the farmers, against which more than Rs 95 thousand crores have been provided to them as claims. He further added that there is a need to expand the scheme in the country, so that its coverage can be increased and more farmers get benefits.

The Agriculture Minister also flagged off IEC vans which will continue to engage the farmers on the PMFBY throughout the crop insurance week. He also launched PMBFY e-brochure, FAQ booklet and a guidebook to assist farmers and on ground coordinators to understand the scheme, its benefits and the process of crop insurance.

Throughout the week, the campaign will cover all notified areas/districts under Kharif 2021 season, with special focus on 75 Aspirational/Tribal districts identified by MoA&FW where crop insurance penetration is low. From 1 July – 7 July 2021, multiple engagement activities will be conducted with farmers of these areas/districts through PMFBY vans, radio, regional newspapers, wall paintings, including digital media.

The on-ground and digital initiatives will explain the farmer about basics of the scheme such as how to enrol in the scheme with the NCIP portal, CSC centres, Insurance Companies, Banks, how to claim insurance under various circumstances, grievance redressal and reporting crop loss. Along with the farmers in tribal areas and aspirational districts, the campaign will engage women farmers as well.

Through videos and photo stories on social media, the campaign also aims to bring out stories of beneficiary farmers who have not only benefited from the scheme but helped the entire farming community through their thought-leadership.

Special care has been taken to ensure that COVID-19 protocols are to be followed wherever grass roots campaigns are being organized, especially during flag off ceremonies undertaken by several states.

The Minister urged all state governments and other stakeholders such as banks, CSCs, insurance companies to work together and reach out to the farmers in these identified 75 blocks/circles/tehsils. He also urged all the farmers to come forward and enjoy the benefits of crop insurance, become self-sufficient in times of crisis and support the creation of an Aatmanirbhar Kisan.

The virtual event was attended by Minister of State Shri Parshottam Rupala, Shri Kailash Chaoudhary and the Secretary, Department of Agriculture, Cooperation and Farmers Welfare Shri Sanjay Agarwal along with other senior officers of agriculture Ministry, Minister of Agriculture from the participating states along with other senior officers, insurance company officials and other stakeholders.