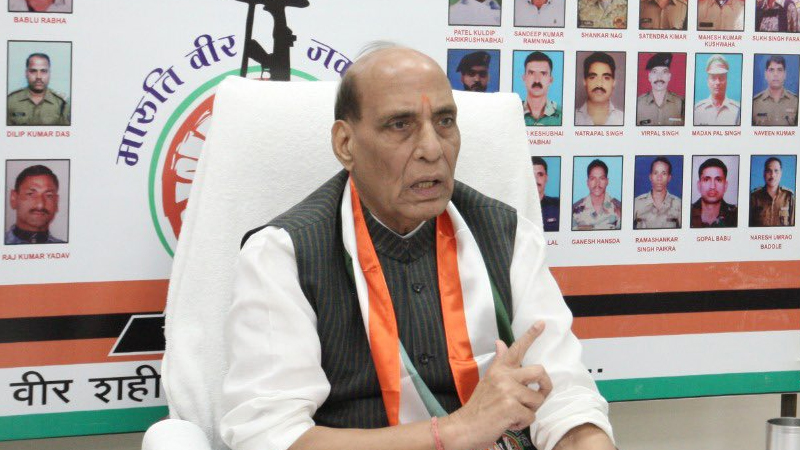 Raksha Mantri Shri Rajnath Singh has urged the citizens to contribute to nation building by transcending sectarian barriers and imbibing the qualities of national pride and patriotism, found in abundance in every Indian soldier & freedom fighter. The Raksha Mantri was virtually addressing an event ‘Shaheedon ko Salaam’ organised by an NGO ‘Maruti Veer Jawan Trust’ on October 16, 2022. He stated that the Armed Forces personnel, rising above the barriers of region, religion, caste & language, serve the motherland selflessly and protect the people from different threats, the same way our revolutionary freedom fighters laid down their lives for India’s independence.

“It is the duty of every citizen to carry forward the ideals and resolutions of our freedom fighters & soldiers; protect the unity, integrity & sovereignty of our nation and play their part in building a strong, prosperous & self-reliant ‘New India’,” said Shri Rajnath Singh, while paying homage to the gallant freedom fighters and Armed Forces personnel who made the supreme sacrifice in the service of the Nation.

Terming the support to the family members of the fallen heroes as a national responsibility, the Raksha Mantri asserted that the Government is committed to the welfare of the Next of Kin of the serving as well as retired personnel. He described family as the biggest strength and support system of a soldier and said that the Government is leaving no stone unturned to strengthen that support system. “During my stint as the Home Minister, ‘Bharat Ke Veer’ fund was one of the major decisions taken to support the families of Central Armed Police Forces (CAPF) jawans and officers. Recently, Ministry of Defence launched ‘Maa Bharati Ke Sapoot’ website to enable people to contribute more to Armed Forces Battle Casualties Fund,” he said.

Shri Rajnath Singh stressed that bolstering the security apparatus of the country by equipping the Armed Forces with indigenous state-of-the-art weapons/equipment is the Government’s top priority and the induction of ‘Made in India’ ships and other equipment reflects the resolve of soon achieving complete ‘Aatmanirbharta’ in defence. He emphasised that strict vigil is being maintained at the borders and the Nation is ready to deal with all challenges. He maintained that “India is a peace-loving nation which has never tried to hurt any country, but if any attempt is made to disrupt peace and harmony in the country, a befitting reply will be given.”

The event was organised to honour the valour and sacrifice of the Armed Forces personnel and freedom fighters. Representatives of the Maruti Veer Jawan Trust as well as families of the fallen heroes joined the event virtually.