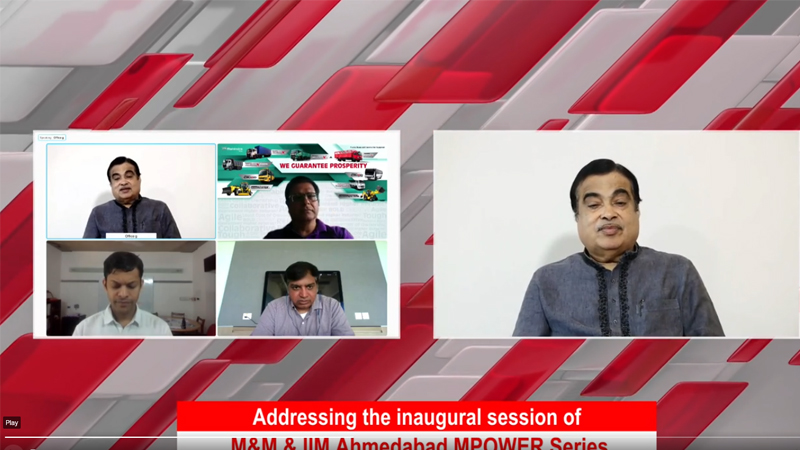 Union Minister for Road Transport and Highways Shri Nitin Gadkari emphasized on reduction of logistic costs below 10% for makingretail market more competitive and boosting economic growth.Addressing the inaugural session of M&M & IIM Ahmedabad MPOWER Series he saidthe government is focusing on integrated infrastructure development through the announcement of the National Infra Pipeline and Gati-Shakti programs. He said it has been planned to construct 25,000 kilometers of National highways within the next 2 years. The Minister said under the National Infrastructure pipeline program, a roadmap of 2,800 projects has been planned with a length of over 1 lakh kilometers. He said flagship Bharatmala pariyojana has planned development of 34,800 km of highways connecting major urban and economic centers throughout the nation.

Shri Gadkari said with so many upcoming new alternative fuels such as Ethanol, LNG, Bio-CNG, Electric, Hydrogen, the transport sector in India is standing at a very important junction. He said whatever policies we design and adopt right now will pave the way for the next 30-40 years. He said we must be open to new technologies as over-regulation can sometimes kill emerging technologies at a very young age.The Minister said what we need is a motivated push for technologies which have a positive impact on the ecology and environment.He said we can use our knowledge in management fields to constantly work and improve the economic viability of such technologies. He said  we are moving ahead with blending ethanol with petrol and even Flex Engines, which can run on both 100% ethanol or 100% petrol. Shri Gadkari said earlier people were reluctant of using or shifting to electric vehicles and had some reservations but today India is breaking records for sale of electric 2 wheelers and the similar patterns will be followed for four wheelers too.