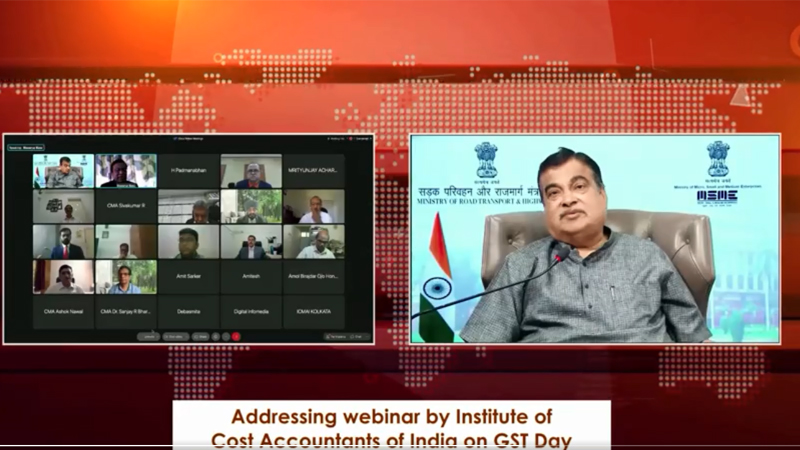 Minister for Road Transport & Highways and MSME Shri Nitin Gadkari has said that GST will help achieve the vision of five trillion dollar Indian economy by 2025. Addressing a webinar on the “GST Day” on the theme “THE JOURNEY OF GST AND WAY FORWARD – AATMANIRBHAR BHARAT” organised by the Institute of Cost Accountants of India he said said GST is founded on the notion of “One Nation, One Market, One Tax” which has helped and will be helping the trade and industry a lot despite the prevailing pandemic situation. Shri Gadkari said Goods and Services Tax was implemented from 1st July 2017 and now it has completed four years of its implementation, during these four years a remarkable change is seen in the way the business is being carried out.

The minister said digitalisation and information technology have an important role to play. He said for transparent and time bound decision making process Performance Audit alongwith Financial Audit is very important. Talking about the problems faced by MSMEs he said delayed payments are the main cause of concern which has to be resolved.

The minister said though GST has completed four years there is still room for improvement . Shri Gadkari said cooperation, coordination, communication and rectification is needed from all stakeholders.

Shri Gadkari complimented The Institute of Cost Accountants of India for conducting regular webinars, seminars, various courses for different stake-holders throughout the Country to unlearn and relearn new subjects which are need of the hour to survive in the New Normal.