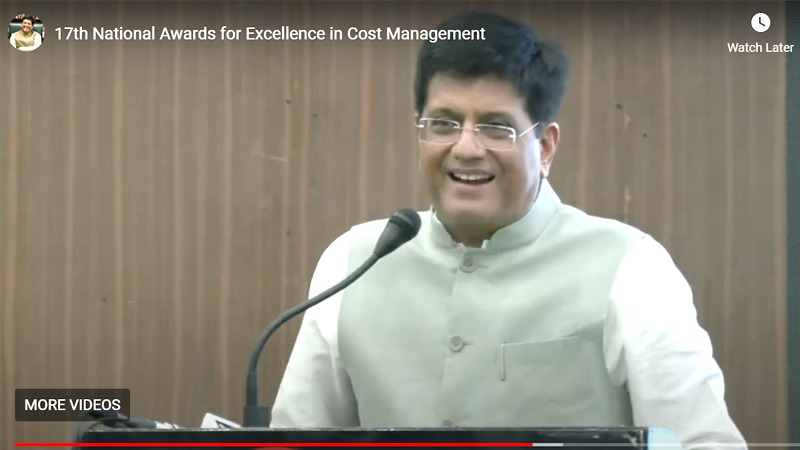 The Union Minister for Commerce and Industry, Consumer Affairs, food and Public Distribution and textiles, Shri Piyush Goyal today said that India had the potential to achieve USD 1 Trillion services and merchandise exports each by 2030. Addressing the ‘21st Civil Services Day 2022, Plenary Session on Aatmanirbhar Bharat – Focus on Exports’ in New Delhi today, the minister stressed upon the need to make exports the fulcrum of India’s growth.

Conveying his congratulations and best wishes in advance to Civil Services officers across the country on the occasion of 21st Civil Services Day, Shri Goyal said that it was indeed an occasion for the civil servants to renew their dedication to the cause of the nation and reiterate their commitment to public service. “Always be conscious that lakhs of lives are affected by every decision, action and signature of yours”, the Minister told the officers.

Dwelling on the History of the Indian Civil Services, the Minister said that during the pre-independence era, the approach of service largely remained pro-British due to compulsions of being under the foreign rule. On a positive note, the Minister said that in the last 75 years, there have been a lot of deliberation on the outlook, character and design of Indian civil services, which have helped it performed very well in the last seven decades.

The minister congratulated all the winners of PM Awards for providing innovative, participative and technology driven administrative solutions to modern problems.
Speaking of the challenges thrown by the COVID 19 pandemic, the Minister said that India was able to turn the crisis into an opportunity to realize the enormous potential that it had to engage with the world from a position of strength.

The Minister observed that one of the biggest beneficiaries of our hard work during the pandemic was the services sector which has grown by leaps and bounds. We had a USD 250 billion export of services during the last year and this was achieved despite travel, tourism and hospitality being severely affected due to Covid-19, he said.

Applauding the achievement, Shri Goyal said that one of the reasons it was made possible was the adaptability and speed with which we reconfigured our processes and rules, facilitated working from home, ensured that people could move equipment, secured broadband access to all. Asserting that all through COVID, India did not let down a single international commitment, the Minister said that the world wanted to deepen its engagement with India because India was trusted to deliver, even in the most adverse of circumstances.

Speaking of India’s robust, living and active democracy, Shri Goyal said that rule of law prevailed across the country and that we had transparent models of governance, a very active media, strong judiciary and democratic institutions and systems that always upheld the right against the wrong. This makes India a trusted partners to the world, both in the geopolitical sphere as well as trade, he added.

It may be noted that India achieved USD 419 bn in FY 21-22, touched USD 30 billion of exports every month and in March, it touched USD 42 billion. The growth momentum has been maintained in the first 14 days of April with touching USD 18.5 billion.

The Minister said that the achievement of such targets was only possible because of the ‘whole of the government’ and ‘whole of the nation’ approaches that we have adopted, the Minister said, with Centre, States Local Bodies, Public Sector Undertakings, autonomous bodies working together to achieve feats like USD 420 billion merchandise exports and USD 250 billion services export, both first of its kind accomplishments.

This achievement is not just a milestone in our Aatmanirbhar Bharat journey, but also a message to the rest of world – that New India offers quality, reliability and scale, Shri Goyal added.
Highlighting the immense potential for growth in exports, the Minister said that labor-oriented sectors like gems and jwellery, textiles, pharma, handloom, handicrafts, leather, etc must receive greater push to boost employment and income generation.

Touching upon the need to develop scale, the Minister said that Production Linked Incentive (PLI) schemes are making our industry competitive by bringing in Economies of Scale and will help us create global champions.

Elaborating upon the importance of peaceful labor environment to ensure flow of investment into the country, Shri Goyal complement labor for the hard work they put in and for peaceful conduct of economic activity all over the country. He added that there was no significant incident of labor disruption in the last 8 years and added that even when businesses had to be shut because of the lack of viability, the government took care to give the labor their due. Stating that having robust labor laws will ultimately benefit labor and create more job opportunities, the Minister said.

Speaking of the recent decision to remove the import duty on cotton, the Minister clarified that that the decision was made to ensure the affordability of cotton particularly in a scenario where cotton prices stood at almost twice the Minimum Support Price, making textile exports uncompetitive.

Mentioning that our share in global goods trade was under 3% in 2021, the Minister said that there is immense scope for growth. For this to happen, the Centre and States have to work in tandem, he added and asked District collectors to promote exports in their districts.

Observing that India had the 2nd largest US FDA approved Pharma manufacturing units, Shri Goyal asked all pharma units, big and small to adopt good manufacturing practices (GMPs) and global quality standards in all processes. He said that India must strive to become a member of Pharmaceutical Inspection Co-operation Scheme (PICS) so that we may succeed in taking our pharma export to USD 200 billion by earning the trust of the world through certification.