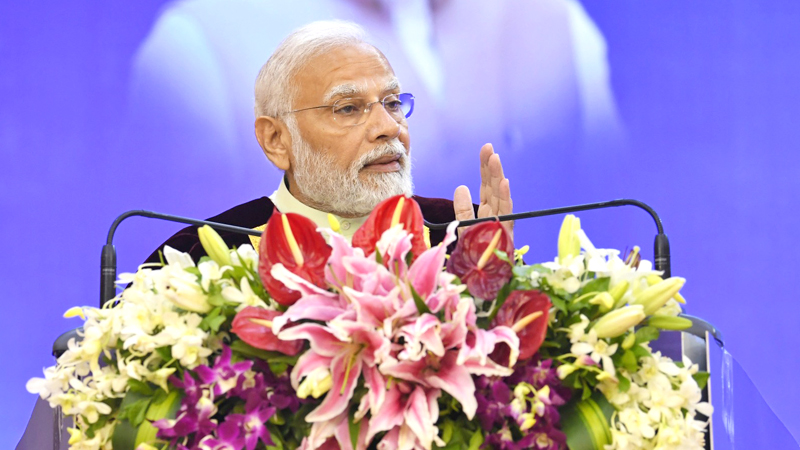 Addressing the gathering, the Prime Minister congratulated the students on getting their degrees. “Congratulations to all those who are graduating today in Anna University’s 42nd convocation. You would have already built a future for yourselves in your minds. Therefore, today is not only a day of achievements but also of aspirations”, he said. Calling them the leaders of tomorrow, the Prime Minister also noted the sacrifices of the parents and support of teachers and non teaching staff of the University.

The Prime Minister noted that the COVID-19 pandemic was an unprecedented event. It was a once-in-a-century crisis that nobody had any user manual for. It tested every country. He remarked that adversities reveal what we are made of. India faced the unknown confidently, thanks to its scientists, healthcare professionals and common people. As a result, he said, every sector in India is bustling with a new life. Industry, investment, innovation or international trade, all are seeing India at the forefront. The Prime Minister said India was the world’s second-largest mobile phone manufacturer last year. Innovation  is becoming a way of life. In just the last 6 years,  the number of recognised start-ups increased by 15,000 percent, he said. The Prime Minister informed that India received a record FDI of over 83 billion dollars last year. Our start-ups too received record funding post-pandemic. Above all this, India’s position in the international trade dynamics is at its best ever.

In this era of tech-led disruptions, the Prime Minister said there are three important factors  in India’s favour. The first factor is there is a taste for technology. There is a growing sense of comfort with the use of technology. Even the poorest of the poor are adapting to it. “The second factor is there is trust in risk-takers. Earlier at social occasions it was difficult for a youngster to say he or she was an entrepreneur. People used to tell them to ‘get settled’, meaning, get a salaried job. Now the situation is the opposite. The third factor is:  there is temperament for reform.” The Prime Minister continued that earlier, “there was a notion that a strong government means it should control everything and everyone. But we have changed this. A strong government does not control everything or everyone. It controls the system’s impulse to interfere. A strong government is not restrictive but is responsive. A strong government does not move into every domain. It limits itself and makes space for people’s talents”, he elaborated. He further emphasised that “A strong government’s strength lies in its humility to accept that it can not know or do everything”, This why reforms are making greater space for people and their talent in every space. He gave examples of freedom and flexibility provided to youth by the National Education Policy and scrapping of 25,000 compliances for ease of business. “Removal of angel tax, removal of retrospective tax, and reduction of corporate tax – are encouraging investments and industry. The reforms in drones, space and geospatial sectors are opening up new avenues”, he said.

The Prime Minister underlined the link between the progress of youth and the nation. He said in conclusion “Your growth is India’s growth. Your learnings are India’s learnings. Your victory is India’s victory.”

During the programme, the Prime Minister awarded gold medals and certificates to 69 gold medalists. Anna University was established on 4 September 1978. It is named after C. N. Annadurai, the former Chief Minister of Tamil Nadu. It has 13 Constituent Colleges, 494 Affiliated Colleges spread over Tamil Nadu and 3 Regional Campuses – Tirunelveli, Madurai and Coimbatore.