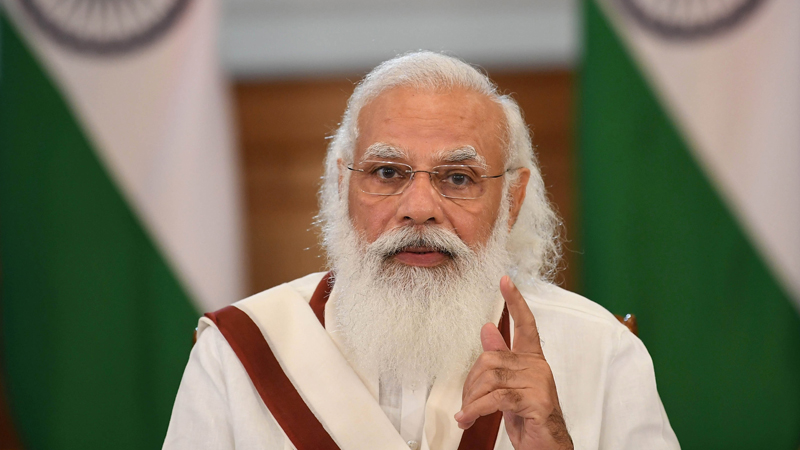 Prime Minister Shri Narendra Modi addressed the Confederation of Indian Industry (CII) Annual Meeting 2021 today via video conferencing. During the meeting, the industry leaders appreciated the Prime Minister’s commitment towards reforms in various sectors, in order to achieve the goal of a $5 trillion economy.  Speaking on the theme of the meeting ‘India@75: Government and Business working together for AatmaNirbhar Bharat’, they gave inputs and suggestions to overcome infrastructural challenges, enhance manufacturing capacity, make the financial sector more vibrant, boost the technical prowess of India to attain a leadership position in the technology sector, among other things.

Addressing the gathering, the Prime Minister said that this CII meeting is taking place on the eve of the 75th Independence Day, in the midst of the Azadi ka Amrit Mahotsav. He said this is a huge opportunity, for new resolutions and for new goals of the Indian industry. He added that the major responsibility for the success of the self-reliant India campaign lies on Indian industries. The Prime Minister lauded the industry for their resilience during the pandemic

Shri Modi asked the Industry to take full advantage of the atmosphere of trust for India’s development and capabilities. Making a note of the changes in the approach of the current government and change in the ways of working of the current setup, the Prime Minister stressed that the new India of today is ready to march with the new world. India, which was apprehensive of foreign investment at one point of time, is welcoming investments of all types today. Similarly, tax policies used to induce despondency among the investors, the same India can boast of the world’s most competitive corporate tax and faceless tax system. Red-tapism of the past has been replaced by a significant rise in the ease of doing business index. Similarly, rationalization of the maze of labour laws into 4 labour codes; agriculture, which was treated as a mere means of livelihood, is being connected with the markets through reforms.  As a result India is getting record FDI and FPI. Forex reserves are also at an all time high level, informed the Prime Minister.

There was a time when foreign was synonymous with better. Industry big-wigs understand the consequences of such a psychology. Situation was so bad that even indigenous brands developed with great hard work were advertised with foreign names. The Prime Minister said, today the situation is changing rapidly. Today the trust of the countrymen is with the products made in India. He said that today every Indian wants to adopt products made in India though the company making those products might not necessarily be Indian.

The Prime Minister said today, when the Indian youths enter the field, they do not have that hesitation. They want to work hard, take risks and bring results. He said that the youth are feeling that we belong to this place. Similar confidence is in India’s startups today. The Prime Minister highlighted that today India has 60 unicorns as opposed to, possibly, 3-4  unicorns 6-7 years ago. Out of these 60 unicorns, 21 emerged during the last few months. The unicorns, with their diversity of sectors indicate changes in India at every level. Investor response has been tremendous for those startups and this signals that India has extraordinary opportunities for growth.

He said that this is the result of the country’s faith in our industry that the ease of doing business and the ease of living is improving. He cited the changes made in the Companies Act as an apt example of this.

The Prime Minister emphasized that the government is able to undertake difficult reforms because for this government reforms are a matter of conviction not compulsion. Referring to the initiatives taken during the Parliament session like The Factoring Regulation amendment Bill, will help small businessmen to get credit. The Deposit Insurance and Credit Guarantee Corporation Amendment Bill will protect the interests of small depositors. Such measures will give a boost to the government’s efforts, said the Prime Minister.

The Prime Minister remarked that today there is a government in the country which is ready to take the biggest risk in the interest of the nation. He emphasized that GST was stuck for so many years only because the previous Governments could not muster up the courage to take political risks. He said we are not only implementing GST but today we are also witnessing record GST collection.