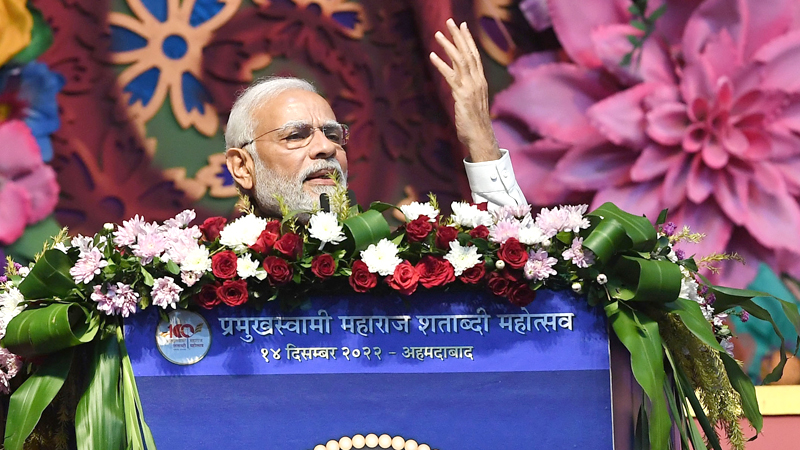 Addressing the gathering, the Prime Minister began his address by hailing Pramukh Swami Maharaj and welcoming everyone on the momentous occasion. He conveyed his feeling of the presence of divinity and grandeur of resolutions and pride for the heritage. He said that one can see every colour of India in the premises.

The Prime Minister thanked every saint for their efforts at giving significance to their power of imagination for coming up with this magnificent convention. He said that this grand event will not only attract the world but also will inspire and impact the coming generations. “I want to appreciate the saints and seers for thinking of a programme of this nature and at such a scale”, he added.  Calling Pujya Pramukh Swami Maharaj a father figure to him, the Prime Minister said that people will come to pay homage to him for this ongoing event. He also mentioned that the UN also celebrated the centenary celebration which proves the eternal and universal significance of India’s spiritual tradition and thought. Highlighting the emotion of ‘Vasudhaiva Kutumbakam’, which has been established by the great saints of India including Swami Maharaj who propagated it even further, the Prime Minister said that the journey from Ved to Vivekananda can be witnessed today in this centenary celebration. “One can witness the rich saintly traditions of India here”, he said. The Prime Minister further remarked that our saintly traditions are not just limited to the propagation of culture, creed, ethics and ideology but the saints of India have tied the world together by emboldening the sentiment of ‘Vasudhaiva Kutumbakam’.

The Prime Minister went nostalgic while remembering his association with Swami Ji, he said “I have been drawn to the ideals of HH Pramukh Swami Maharaj Ji from my childhood. I never thought that sometime in my life, I would get to meet him. It was perhaps back in 1981 that I met him during a Satsang. He only spoke of Seva. Each and every word got imprinted on my heart. His message was very clear that the supreme goal of one’s life should be Seva. ” He also noted the grace of Swami Ji who used to tailor his message for the ability of the receiver; this was the vastness of his personality, the Prime Minister added. The Prime Minister continued, everyone knows him as a spiritual person but he was a social reformer too in the truest sense of the word.  The Prime Minister underlined Swami ji’s intuitive grasp of modern opportunities and his natural communication of the strength of the individual to take care of his or her problems. His key emphasis was on the welfare of society, the Prime Minister emphasised.  “HH Pramukh Swami Maharaj Ji was a reformist. He was special because he saw good in every person and encouraged them to focus on these strengths. He helped every individual who came in contact with him. I can never forget his efforts during the Machchhu dam disaster in Morbi”, the Prime Minister said. The Prime Minister recalled many key events of his life when he went to meet Pujya Swami Ji.

Revisiting the past when the Prime Minister was a candidate from Rajkot in 2002, he recalled that during the election campaign he got a pen from two saints saying that Pramukh Swami Maharaj Ji had requested me to sign the nomination papers using this pen. “From there till Kashi elections, this practice has continued”, he remarked. Drawing an analogy to the relationship between a father and son, the Prime Minister recalled the time when he was working as a volunteer in Kutch when Pramukh Swami Maharaj had made food arrangements for him.  He also informed that in the past 40 years he received Kurta Pajama cloth from Pujya Swami Ji every year without fail. An emotional Prime Minister said that this is a spiritual connection, a father-son relationship. He said that he is certain that Pujya Swami Ji is keeping an eye on his every move in the service of the country.

Throwing light on his relationship with Pramukh Swami Maharaj, the Prime Minister recalled that Swami Maharaj ji was the first person to call him after he reached Jammu during the hostile Ekta Yatra under Dr MM Joshi’s leadership in 1991. “The moment I reached Jammu after hoisting the national flag at Laal Chowk, the first call I got was from Pramukh Swami Maharaj Ji, who asked about my wellbeing”, he said. The Prime Minister also recalled the dark time of the terrorist attack on the Akshardham Temple and remembered his conversation with Pramukh Swami Maharaj about maintaining calm during such tumultuous times. This poise was possible only because of the inner spiritual strength of Pujya Swami Ji.

Informing about Pramukh Swami Maharaj’s wish to build the Akshardham on the banks of the Yamuna, the  Prime Minister highlighted the vision of Mahant Swami Maharaj who was the then disciple of Pramukh Swami Maharaj. He remarked that even though people look at Mahant Swami Maharaj as a Guru, the Prime Minister is aware of his dedication as a disciple towards Pramukh Swami Maharaj Ji. “It is a result of his vision and dedication that Akshardham Temple was built on the banks of Yamuna. The millions of people who visit Akshardham Temple every year try to understand the Indian culture and traditions through its magnificence”, the Prime Minister continued. “Go to any part of the world, you will see the outcome of Pramukh Swami Maharaj Ji’s vision. He ensured our Temples are modern and they highlight our traditions. Greats like him and the Ramakrishna Mission redefined the Sant Parampara. Pujya Swami Ji played a big role in creating the tradition of service that goes beyond spiritual upliftment.” The Prime Minister further added that Swami ji ensured that a saint, apart from renunciation, should also be capable and well-versed. As Swami Ji established an institutional mechanism for holistic spiritual training, the Prime Minister said that this will benefit the nation for many generations to come. “He never differentiated between ‘Dev Bhakti’ (worship of god) and ‘Desh Bhakti’, devotion to the country”, the Prime Minister pointed out. Those who live for ‘Dev Bhakti’ and those who live for ‘Desh Bhakti’ were ‘Satsangis’ for him. The Prime Minister said that “our saints went beyond narrow sects and worked to strengthen the notion of Vasudhaiva Kutumbakam and uniting the world.”

Concluding the address, the Prime Minister remarked on the journey of his conscience and said that he has always been associated with such saintly and advanced traditions. “In a vindictive and vengeful world like that of today, I have been fortunate enough to be around saints like Pramukh Swami Maharaj and Mahant Swami Maharaj who create a virtuous environment. It was like a tired person sitting in the shadow of a great banyan tree. Not ‘Rajasi’ or ‘Tamsik’, one has to continue moving while staying ‘Satvik’ ”, the Prime Minister concluded.

Chief Minister of Gujarat, Shri Bhupendra Patel, Governor of Gujarat,  Shri Acharya Devvrat, His Holiness Mahant Swami Maharaj, and Pujya Ishwarcharan Swami were those present on the occasion among others.

His Holiness Pramukh Swami Maharaj was a guide and guru who touched countless lives across India and the world. He was widely respected and admired as a great spiritual leader. His life was dedicated to the service of spirituality and humanity. As the leader of BAPS Swaminarayan Sanstha, he inspired countless cultural, social and spiritual initiatives, providing comfort and care to millions.

People from across the world are celebrating his life and work in the birth centenary year of HH Pramukh Swami Maharaj. The year-long worldwide celebrations have culminated in the ‘Pramukh Swami Maharaj Shatabdi Mahotsav’ hosted by BAPS Swaminarayan Mandir, Shahibaug, which is the global headquarters of BAPS Swaminarayan Sanstha. The month-long celebration is taking place from 15th December 2022 to 15th January 2023 in Ahmedabad, featuring daily events, thematic exhibitions and thought-provoking pavilions.

BAPS Swaminarayan Sanstha was established in 1907 by Shastriji Maharaj. Based on the teachings of the Vedas and founded on pillars of practical spirituality, BAPS reaches out far and wide to address today’s spiritual, moral and social challenges. BAPS aims to preserve values of faith, unity, and selfless service and provides for the spiritual, cultural, physical, and emotional needs of people from all walks of life. It performs humanitarian activities through global outreach efforts.