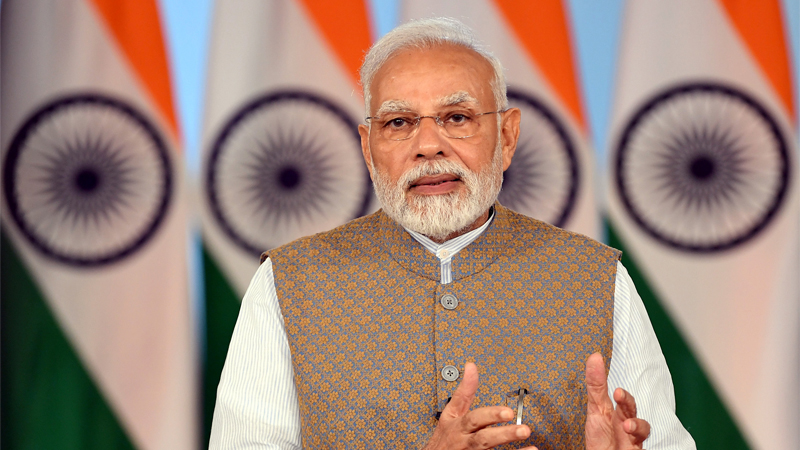 The Prime Minister, Shri Narendra Modi addressed the students of the Industrial Training Institute at the first ever Kaushal Dikshant Samaroh via video message today. Around 40 lakh students had joined this program.

Addressing the gathering, the Prime Minister remarked that as India is moving forward in the 21st century, history has been created today on the occasion of the skill convocation of more than 9 lakh students of the Industrial Training Institute while more than 40 lakh students are connected with us virtually. The Prime Minister pointed out that the students with their skills are taking their first step on the path of innovation on the birth anniversary of Lord Vishwakarma. “I can confidently say that as pleasant as your beginning is, your journey to tomorrow will also be more creative”, he said.

Elaborating on Vishwakarma Jayanti, the Prime Minister said that it is the festival of dignity and consecration of skill. Drawing an analogy to a sculptor making an idol of the god, the Prime Minister said that today it is a matter of great pride for all of us that on the auspicious occasion of Vishwakarma Jayanti, the skills of the students are being honoured and recognized. “Vishwakarma Jayanti is the honour of every person who works hard in the true sense, it is the day of labour”, the Prime Minister continued “in India, we have always seen a portrayal of God in the skill of the labourer, They are seen in the form of Vishwakarma.” Shri Modi elaborated that the skill that they possess has a fragment of God somewhere in it. “I understand that this event is like an emotional tribute to Lord Vishwakarma, like ‘Kaushalanjali’”, he added.

Highlighting the achievements of the Government in the last eight years, the Prime Minister said that India has initiated new schemes with the inspiration of Lord Vishwakarma and is trying to revive the tradition of ‘Shramev Jayate’ by laying emphasis on skill development. “To make this the century of India, it is very important that the youth of India should be equally proficient in education as well as skill”, the Prime Minister remarked. Shri Modi added that the government has given top priority to the skill development of youth and the creation of new institutions. “The first ITI in our country was established in 1950. In the following seven decades, 10 thousand ITIs were formed. In the 8 years of our government, about 5 thousand new ITIs have been created in the country. More than 4 lakh new seats have also been added to ITIs in the last 8 years”, the Prime Minister added.

The Prime Minister went on to elaborate that National Skill Training Institutes, Indian Institute of Skills, and thousands of skill development centres have also been opened across the country apart from the ITIs. The Prime Minister further said that the government is also going to open more than 5000 skill hubs to promote skill development at the school level. After the implementation of the New National Education Policy, experience-based learning is also being promoted and skill courses are being introduced in schools.

The Prime Minister expressed happiness when he informed the students that those coming to ITI after passing their 10th will get their 12th clearing certificate easily through National Open School. “This will make you more comfortable in further studies”, Shri Modi added. The Prime Minister further added that there is a special provision for the recruitment of youth in the army who have taken technical training from ITIs.

Talking about the era of the Fourth Industrial Revolution, ‘Industry 4.0’, the Prime Minister remarked that Industrial Training Institutes will have a big role to play in India’s success. He pointed out that the nature of the job is changing with time, therefore, the government has taken special care that the students studying in our ITIs should also get the facility of every modern course. Elaborating on the availability of the courses, Shri Modi said that many courses related to coding, AI, robotics, 3D printing, drone technology, and telemedicine have been started in ITIs. The Prime Minister pointed out that as India is taking lead in the field of renewable energy, solar power and electric vehicles, the courses related to such fields have been introduced in many of our ITIs. “It will be easier for students like you to get employment opportunities”, he added.

Talking about the recent developments of providing optical fiber to every village, and opening lakhs of Common Service Centers, the Prime Minister said that as technology is expanding in the country, so are the job opportunities. He said that more and more opportunities are being created in the villages for the students who have passed out from ITIs. “Be it the mobile repair work in the village or work concerning new technology in agriculture, spraying fertilizer or be it supplying medicine with the help of drones, many such new jobs are being added to the rural economy”, the Prime Minister remarked, “The role of ITIs is very important in this, our youth should make the most out of these possibilities.” The Prime Minister also said that the government is also continuously working to upgrade ITIs with a similar vision in mind.

The Prime Minister reiterated that along with skill development, it is equally important for the youth to have soft skills. Giving examples, Shri Modi said that things like making a business plan, plans for getting a loan from the bank, filling out the necessary forms, and registering a new company are covered as part of the course. “The result of these efforts of the government is that today, India has quality in skills, and also diversity. In the past few years, our ITI pass-outs have won many big prizes in World Skills Competitions”, he added.

Elaborating on skill development, the Prime Minister said, “When a youth has the power of education as well as the power of skill, then his self-confidence automatically increases. When the youth comes out empowered with skills, then he gets an idea on how to start his work, to support this spirit of self-employment.” The Prime Minister highlighted the power of schemes like Mudra Yojana, Startup India and Standup India, which provide loans without guarantee.

“The goal is in front, you have to move in that direction. Today the country has held your hand, tomorrow you have to take the country forward” the Prime Minister urged. Drawing everyone’s attention to Azadi ka Amrit Kaal, Shri Modi said that the next 25 years of our lives are as important as the next 25 years for India. “You all are the leaders of Make in India and Vocal for Local campaign. You are like the backbone of India’s industry and therefore you have a big role to play in fulfilling the resolve of a developed Atmanirbhar Bharat”, The Prime Minister remarked.

Highlighting the opportunities on a global level, the Prime Minister said that many big countries of the world need a skilled workforce to fulfil their dreams and maintain their pace. Shri Modi remarked that there are many opportunities waiting in the country as well as abroad. “In the changing global circumstances, the confidence of the world in India is also increasing continuously. Even during the Corona period, India has proved how its skilled workforce and its youth are capable of providing solutions to the biggest challenges.” The Prime Minister remarked that Indians are making a mark in every country due to their skills and talent, be it health services or hotel-hospital management, digital solutions, or the field of disaster management.

In concluding his address, the Prime Minister reiterated the need to keep upgrading the skills that will become the basis of their futures. Shri Modi remarked, “When it comes to skills, your mantra should be ‘Skilling, ‘Reskilling’ and ‘Upskilling’!” The Prime Minister urged the students to learn new skills and share their knowledge. “I am sure, you will move ahead at this pace, and with your skill, you will give direction to the better future of New India.”