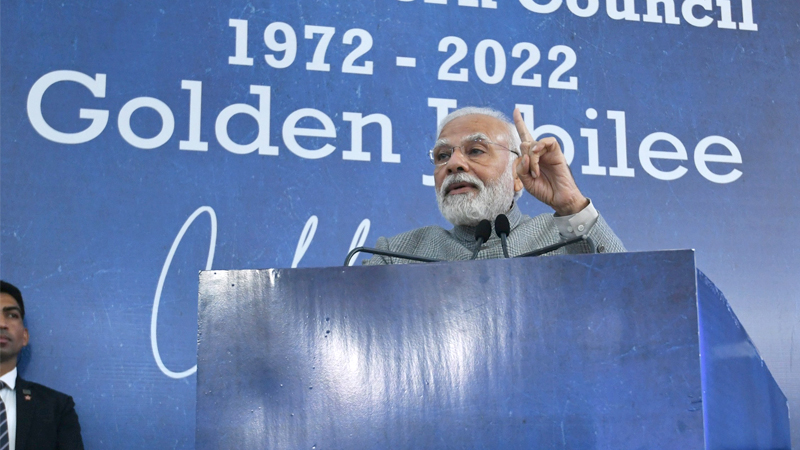 Hailing the contribution of NEC in the development of the North East region, Prime Minister said that this golden jubilee celebration of the NEC coincides with the ongoing Azadi ka Amrit Mahotsav. Underscoring that he often refers to the 8 states of the region as Asht Lakshmi, he said the government should work on  8 foundation pillars  for its development, viz. Peace, Power, Tourism, 5G connectivity, Culture, Natural farming, Sports, Potential.

Prime Minister said that the Northeast is our gateway to South -East Asia and can become a centre for development of the entire region. And to realise this potential of the region, work is going on the projects like Indian-Myanmar-Thailand trilateral highway and Agartala-Akhaura rail project. Prime Minister highlighted that the government has gone beyond the conversion of the ‘Look East’ policy to ‘Act East’, and now its policy is ‘Act Fast for Northeast’ and ‘Act First for Northeast.’ Highlighting the success of peace initiatives in the region, he said that many peace agreements have been signed, inter-state boundary agreements have been done and there has been a marked reduction in instances of extremism.

Discussing India’s commitment towards net zero, Prime Minister said Northeast can become a powerhouse of hydropower. This will make the states of the region power surplus, help in expansion of industries and generate a large number of jobs. Discussing the tourism potential of the region, he said that both culture and nature of the region are attracting tourists from across the world. He added that tourism circuits are being identified and developed in the region also. He also discussed sending students from 100 universities to Northeast, which will help bring people of different regions closer. These students can then ​​become ambassadors of the region.

Talking about boosting connectivity in the region, Prime Minister said that iconic bridge projects which were pending since several decades have now been completed. In last 8 years, number of airports in the region has jumped from 9 to 16, and the number of flights have increased from about 900 before 2014 to around 1900. Many North eastern states have come to Railway map for the first time and efforts are being done to expand the waterways also. The length of national highways has increased by 50% since 2014 in the region. He said that with the launch of the PM-DevINE scheme, the infrastructure projects in the Northeast have gained more momentum. He added that the government is also working on improving digital connectivity in the Northeast by increasing the optical fibre network. Talking about development of Aatmanirbhar 5G infrastructure, he said that 5G will help further development of startup ecosystem, service sector among others in the region. He said that the government is committed to making the Northeast not only a centre of economic growth, but also of cultural growth.

Speaking about the agriculture potential of the region, Prime Minister underlined the scope of natural farming, in which Northeast can play a leading role. He said that through Krishi UDAN, farmers of the region are able to send their products across the country and different parts of the world as well. He urged the North eastern states to participate in the ongoing National Mission on Edible Oils – Oil Palm. He also spoke how drones can help farmers overcome geographical challenges and help their produce reach the market.

Discussing the contribution of the region to the field of sports, he said that the government is working towards providing support to sportspersons of the region through development of India’s first sports university in Northeast. Also, more than 200 Khelo India Centres have been approved in the 8 states in the region, and many athletes of the region are getting benefits under the TOPS scheme.

Prime Minister also discussed India’s G20 Presidency and said that its meetings would witness people from all over the world coming to the Northeast. This will be an apt opportunity to showcase the nature, culture and potential of the region, he said.