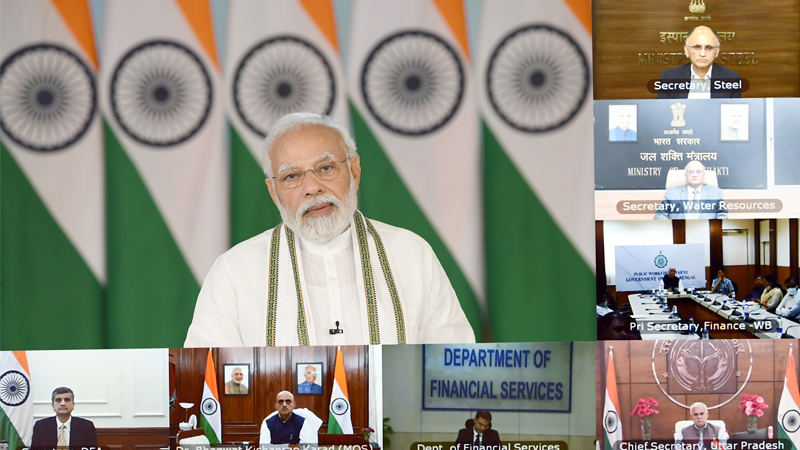 At the outset the Prime Minister greeted on International Women Day and noted that India has a woman Finance Minister who has given such a progressive budget.

The Prime Minister said that Indian economy is once again picking up momentum after once-in-a-century pandemic and this is reflection of our economic decisions and strong foundation of economy. He said that the government has taken many steps to maintain the momentum of high growth in this budget.  “By encouraging foreign capital flows, reducing tax on infrastructure investment, creating institutions like NIIF, Gift City, new DFIs, we have tried to accelerate financial and economic growth”, he said. “The country’s commitment to the widespread use of digital technology in finance is now reaching the next level. Be it 75 Digital Banking Units or Central Bank Digital Currency (CBDCs) in 75 districts, they reflect our vision”, he added.

Mentioning the Aatmnirbhar Bharat Abhiyan, the Prime Minister emphasized the need to mull over the ways of reducing dependence on other countries by exploring different models of financing the related projects. He gave example of PM Gatishakti National Masterplan as one such step.

In the direction of balanced development of the country, the Prime Minister reiterated priority of the schemes such as Aspirational Districts Programme or the development of eastern India and the North East.

The Prime Minister stressed the link between India’s aspirations and strength of MSME. “We have done many fundamental reforms and made new schemes to strengthen MSMEs. The success of these reforms is dependent on strengthening their financing”, he said.

The Prime Minister insisted that Industry 4.0 is not possible till the country moves ahead in the fields like fintech, agritech, meditech and skill development. Help of financial institutions in such areas will take India to new heights in industry 4.0, said the Prime Minister.

The Prime Minister talked at length about the vision of finding sectors where India can figure in top 3 countries. He asked whether India can emerge among top 3 countries in the sectors like constructions, startups, recently opened up sectors like drones, space and geo-spatial data.  For this, he said, it is imperative that our industry and start up get full support of the financial sector. The expansion of entrepreneurship, innovation and search for new markets among the startups will happen only when there is deep understanding of these ideas of future among those who finance them.  “Our Financing Sector will also have to consider innovative financing and sustainable risk management of new futuristic ideas and initiatives”, Shri Modi emphasized.

The Prime Minister stressed that a big base of Indian economy is rural economy. Government is taking steps like strengthening SHGs, Kisan Credit Cards, Farmer Producer Organisations, and Common Service Centers. He asked the gathering to keep rural economy in the centre of their policies.

He said India’s aspirations are also linked with natural farming and organic farming. “If someone is coming forward to do new work in them, then it is necessary to think about how our financial institutions can help him”, he added.

The Prime Minister touched upon environmental and ecological dimension of the budget. He reiterated India’s goal of net-zero by 2070 and said that the work in this direction has already started. “To speed up these works, it is necessary to accelerate environment friendly projects. Study and implementation of green financing and such new aspects is the need of the hour today”, he said.