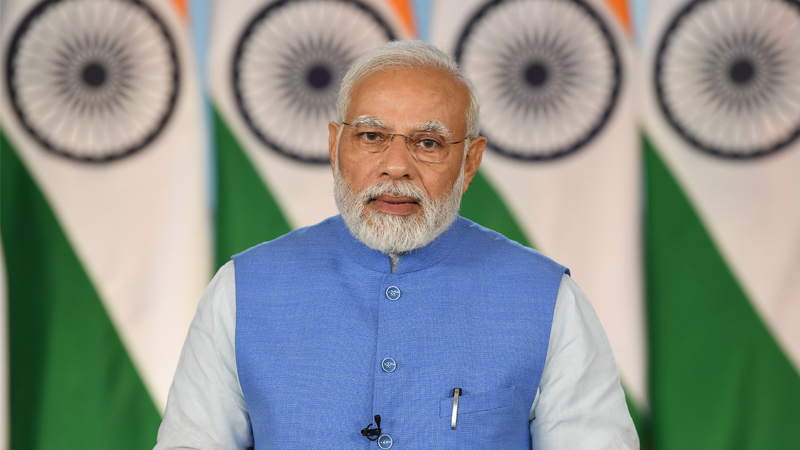 The Prime Minister, Shri Narendra Modi addressed the programme on the 10th Punyatithi of Late Shri Harmohan Singh Yadav, a former MP, MLC, MLA and Shaurya Chakra awardee and a towering figure and leader of the Yadav community.

Addressing the gathering, the Prime Minister paid tributes to Late Shri Harmohan Singh Yadav on his 10th Punyatithi. He also noted that today, for the first time after the independence, a woman from the tribal community assumed the highest office of the country. He called it a big day for India’s democracy.

The Prime Minister recalled the glorious heritage of great leaders from Uttar Pradesh, the Prime Minister said that “Harmohan Singh Yadav ji carried forward the ideas of Dr Ram Manohar Lohia ji in his long political career from the soil of Uttar Pradesh and Kanpur. The contribution he made in the politics of the state and the country, the work he did for the society, is still guiding the generations”. The Prime Minister mentioned his dedication to the society and community in his long and distinguished journey from ‘Gram Sabha to Rajya Sabha’.

The Prime Minister noted the exemplary courage of Shri Harmohan Singh Yadav and said “Harmohan Singh Yadav ji not only took a political stand against the Sikh massacre, but he came forward and fought to protect the Sikh brothers and sisters. Without caring for his life, he saved the lives of many innocent Sikh families. The country also recognized his leadership and he was given Shaurya Chakra”

Recalling the words of Shri Atal Bihari Vajpayee, the Prime Minister underlined the primacy of the nation above party politics. He said “parties exist because of democracy, and democracy exists because of the country. Most of the parties in our country, especially all the non-Congress parties have also followed this idea and the ideal of cooperation and coordination for the country”. He gave examples of the 1971 war, the Atomic test and the fight against the  Emergency to illustrate the feeling of political parties to put up a united front for the country. “When the country’s democracy was crushed during the Emergency, all the major parties, we all came together and fought to save the Constitution. Chaudhary Harmohan Singh Yadav ji was also a brave soldier in that struggle. That is, the interests of our country and society are always bigger than ideologies”, he added. However, the Prime Minister said, “in recent times, there has been a trend to put ideological or political interests above the interest of the society and the country. Many times, some opposition parties put obstacles in the work of the government because when they were in power, they could not implement the decisions themselves.” The Prime Minister said that the people of the country do not like this. “It is the responsibility of every political party that the opposition of a party or an individual should not turn into opposition to the country. Ideologies and political ambition have their place, and they should have. But, country, society and nation come first”

The Prime Minister dwelled on Dr Lohia’s concept of cultural strength. Shri Modi said in the original Indian thought, society is not an issue of contention or debate and is seen as a framework of cohesion and collectivity. He remembered that Dr Lohia worked to strengthen the cultural strength of the country by organising Ramayana fairs and caring for Ganga. He said that India is realising these dreams by initiatives like Namami Gange, reviving the cultural symbols of the society and emphasising the importance of duty along with ensuring rights.

The Prime Minister stressed that for the service of society, it is also necessary that we accept the spirit of social justice, and adopt it. Today, when the country is celebrating the Amrit Mahotsav on 75 years of its independence, it is very important to understand this and move in this direction, he said. The Prime Minister noted that social justice means that every section of society should get equal opportunities, and no one should be deprived of the basic necessities of life. Dalits, Backward, Adivasis, Women, Divyang, when they come forward, only then the country will go ahead. Harmohan ji considered education most important for this change. His work in the education field is inspiring. Country is moving on this path through initiatives like Beti Bachao, Beti Padhao, Eklavya Schools for tribal areas, promotion of education in mother tongue “The country is moving forward on the mantra of empowerment through education and education itself is empowerment”, he added.

Shri Harmohan Singh Yadav (18 October 1921 – 25 July 2012) was a towering figure and leader of the Yadav community. The Prime Minister’s participation in the programme is in recognition of the late leader’s contribution to farmers, backward classes and other sections of the society.

Shri Harmohan Singh Yadav remained active in politics for a long time and served in various capacities as MLC, MLA, member of Rajya Sabha and chairman of ‘Akhil Bhartiya Yadav Mahasabha’. He was also instrumental in establishing many educational institutions in and around Kanpur with the help of his son Shri Sukhram Singh.

Shri Harmohan Singh Yadav was awarded Shaurya Chakra in 1991 for his display of valour in protecting the lives of several Sikhs during the 1984 anti-Sikh riots.