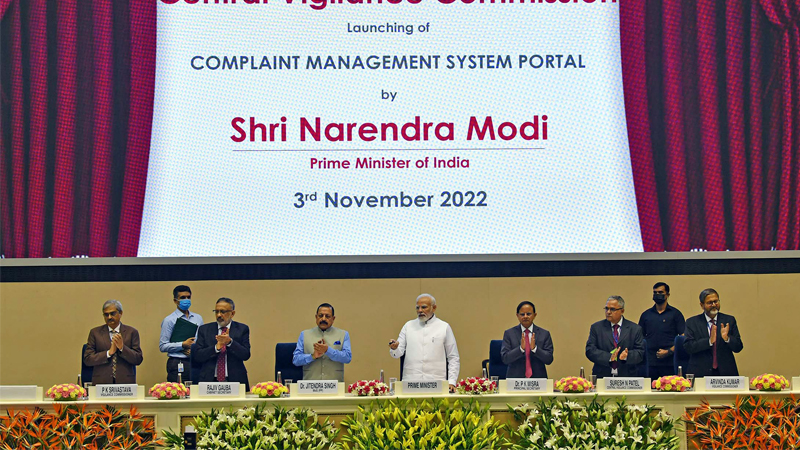 Addressing the gathering, the Prime Minister said that Vigilance Awareness Week began with the birth anniversary of Sardar Patel. “The entire life of Sardar Patel was dedicated to honesty, transparency and the building of a public service system based on these values”, he said. The Prime Minister remarked that the campaign revolving around awareness and alertness is based on these principles. He observed that the campaign of Vigilance Awareness Week is taking place to realise the dreams and aspirations of a corruption-free India and underlined its importance in the lives of every citizen.

The Prime Minister said for a developed India, trust and credibility are critical.  that people’s trust in the government enhances people’s self-confidence. The Prime Minister lamented the fact that earlier governments not only lost people’s confidence but they also failed to trust people. The legacy from the long period of slavery of corruption, exploitation, and control over resources, unfortunately, received more strength after the independence. This severely harmed at least four generations of this country, he said. “We have to change this decades-long way fully in the Azadi ka Amrit Kaal”, the Prime Minister pointed out.

Referring to his clarion call from the ramparts of Red Fort for a decisive battle against corruption the Prime Minister pointed out two key reasons for corruption and hindering people’s progress i.e. lack of amenities and unnecessary pressure from the government. He said for a very long time, this absence of amenities and opportunity was deliberately kept alive and a gap was allowed to widen leading to an unhealthy competition of a zero-sum race. This race fed the ecosystem of corruption. Corruption created by this scarcity affects the poor and middle classes the most. “If the poor and middle class spend their energy to arrange for the basic amenities, then how will the country progress?” the Prime Minister asked. “That is why”, the Prime Minister remarked “we are trying to change this system of scarcity and pressure for the last 8 years. The government is trying to fill the gap between supply and demand. The three ways adopted to achieve this are advancement in technology, taking basic services to the saturation level, and finally heading towards atmanirbharta.”

With regard to the use of technology, the Prime Minister mentioned linking PDS to technology and removing crores of fake beneficiaries and saving more than 2 lakh crore rupees from going to the wrong hands by adopting Direct Benefit Transfer (DBT). Similarly, the adoption of transparent digital transactions, and transparent government procurement through GeM is making a huge difference.

Speaking on taking the basic facilities to the saturation level, The Prime Minister pointed out that reaching every eligible beneficiary of any government scheme and achieving the goals of saturation puts an end to discrimination in society while eliminating the scope of corruption. Highlighting the principle of saturation that is adopted by the government for the delivery of every scheme, the Prime Minister gave examples of water connections, pucca houses, electricity connections and gas connections.

The Prime Minister said that too much dependence on foreign goods has been a big cause of corruption. He highlighted the government’s push towards atmanirbharta in defence and underlined that the possibility of scams is ending as India would be manufacturing its own defence equipment, from rifles to fighter jets to transport aircrafts.

Terming CVC  an institution that encourages everyone’s efforts to ensure transparency, the Prime Minister recalled his request last time for ‘preventive vigilance’ and praised the efforts of CVC in that direction. He also asked the vigilance community to think about modernising their audits and inspections. “The will which the government is showing against corruption, the same will is necessary to be seen in all the departments as well. For a developed India, we have to develop such an administrative ecosystem, which has zero tolerance on corruption”, he said.

The Prime Minister asked for a system where corruption-related disciplinary proceedings are completed in time-bound mission mode. He also suggested continuous monitoring of criminal cases and asked to devise a way of ranking departments on the basis of pending corruption cases and publishing the related reports on a monthly or quarterly basis. The Prime Minister also asked for streamlining of the vigilance clearance process with the help of technology. There is a need for auditing the data of public grievances so that we can go to the root causes of corruption in the concerned department, the Prime Minister added.

The Prime Minister stressed the need to bring in common citizens in the work of keeping a vigil over corruption. “No matter how powerful the corrupt may be, they should not be saved under any circumstances, it is the responsibility of organisations like you. No corrupt person should get political-social support, every corrupt person should be put in the dock by the society, it is also necessary to create this environment”, he said. Touching upon a worrying trend, the Prime Minister said “We have seen that many times the corrupt people are glorified in spite of being jailed even after being proven to be corrupt. This situation is not good for Indian society. Even today, some people give arguments in favour of the corrupt who have been found guilty. It is very necessary for such people, such forces to be made aware of their duty by society. In this also concrete action taken by your department has a big role.”

The Prime Minister emphasised that institutions acting against the corrupt and corruption like the CVC, have no need to be defensive in any way. He stressed that there is no requirement to work on any political agenda but to work towards making the lives of ordinary citizens simpler. “Those who have vested interests will try to obstruct the proceedings and defame individuals associated with these institutions”, the Prime Minister interjected, “But Janta Janardan is the form of God, they know and test the truth, and when the time comes, they stand with those in support of the truth”. The Prime Minister further urged everyone to walk the path of truth to fulfil their duties with dedication and emphasised, “when you take action with conviction, the whole nation stands with you.”

Concluding the address, the Prime Minister said that the responsibility is huge and the challenges keep transforming too. “I am sure that you will continue to play a vital role in building a transparent and competitive ecosystem in Amrit Kaal”, the Prime Minister said. He stressed the need for constant dynamism in the methodology to tackle this challenge. The Prime Minister also expressed delight in interacting with the winners of the essay competition and suggested the introduction of a speech competition in the future. Observing that 4 of the 5 winners who received the essay prize for the fight against corruption were girls, the Prime Minister urged the boys to take up the mantle and rally together in this journey. “The importance of cleanliness is understood only when the dirt is eliminated,” he added. “Technology is definitely leaving a paper trail of sorts when it comes to tracking those who work outside the ambit of law”, the Prime Minister observed, and concluded by stressing the need to adopt technology as much as possible in this fight against corruption.

The portal is envisioned to provide end-to-end information to the citizens through regular updates on the status of their complaints. He will also release a series of pictorial booklets on “Ethics and Good Practices”; Compilation of best practices on “Preventive Vigilance” and a Special issue “VIGEYE-VANI” on public procurement.

CVC observes Vigilance Awareness Week every year to bring together all stakeholders in spreading the message of integrity in all spheres of life. This year, it is being observed from 31st October to 6th November with the theme of “Corruption-free India for a developed nation”. The Prime Minister also awarded prizes to five students who wrote the best essays during a nationwide essay competition conducted by CVC on the above theme of Vigilance Awareness Week.