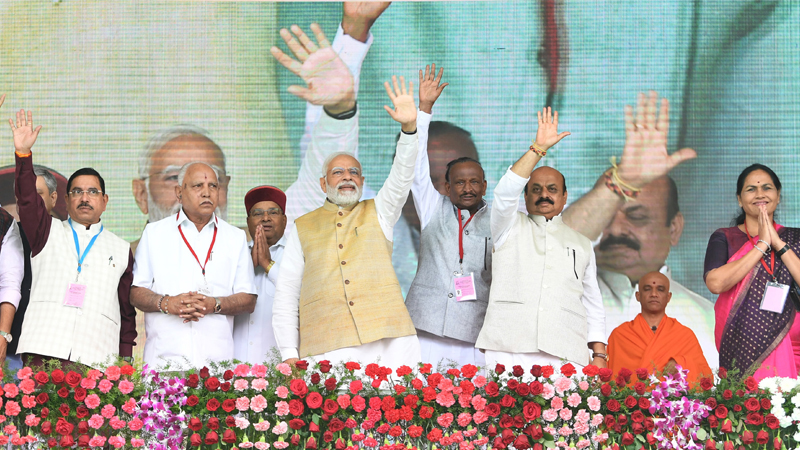 Addressing the gathering, the Prime Minister expressed delight to be present in Karnataka on the occasion of the Jayanti of two great personalities of Karnataka. He paid tributes to Sant Kanaka Das and Onake Obavva. The Prime Minister said that today Karnataka got the first ‘made in India’ Vande Bharat Train that connects Chennai, Startup capital Bengaluru and heritage city Mysuru. “Today Bharat Gaurav Kashi Darshan Train, which will enable Ayodhya, Kashi and Prayagraj Darshan for the people of Karnataka, was also launched”, he said.

Speaking about the Terminal 2 of Kemepgowda International Airport in Bengaluru, the Prime Minister remarked that the infrastructure is more beautiful and magnificent than the pictures shared yesterday. The Prime Minister also threw light on the monumental statue of Nadaprabhu Kemepegowda and said that it will act as an inspiration to building the Bengaluru and India of the future. Remarking on India’s identity in the world of startups, the Prime Minister said that Bengaluru plays a pivotal role in defining this identity. “Bengaluru is a representation of the startup spirit of India, and it is this spirit that makes the country stand out from the rest of the world”, Shri Modi remarked. The Prime Minister highlighted that this programme is a reflection of the youthful spirit of Bengaluru.

Vande Bharat is not just a train but it is a new identity of New India. “Vande Bharat Express is a symbol that India has now left the days of stagnation behind. We are moving with a goal for the total transformation of India Railways.” More than 400 Vande Bharat Trains and Vista Dome Coaches are becoming the new identity of India Railways. Dedicated freight corridors will increase the speed of freight transportation and save time. Rapid Broad Gauge conversion is bringing new areas to the railways’ map. Talking about the modernization of railway stations, the Prime Minister said Sir M. Visvesvaraya Terminal, Bengaluru railway station is providing a much-enhanced experience to the commuters. Other stations, including in Karnataka, are being taken for upgradation, he informed.

Throwing light on the vision of a developed India, the Prime Minister said that connectivity between cities will play a crucial role and it is also the need of the hour. The Prime Minister said that the new Terminal 2 of Kemepegowda  Airport will add new facilities and services to boost connectivity. He pointed out that India is one of the fastest-growing markets in the world when it comes to air travel and the number of passengers travelling by air is also growing rapidly. The Prime Minister informed that there were only 70 airports in the country before 2014, but today this number has doubled to more than 140. “Airports are creating a new playing field for the expansion of businesses while also creating new employment opportunities for the youth of the nation”, Shri Modi remarked.

The Prime Minister pointed out that Karnataka is reaping the benefits of the beliefs and aspirations that the entire world has shown towards India. The Prime Minister drew everyone’s attention to the investment of Rs 4 lakh crore in Karnataka that happened when the world was struggling with the covid pandemic. “Last year, Karnataka led the way in attracting foreign direct investment in the country”, he added. He further elaborated that this investment is not only limited to the IT sector but ranges from biotechnology to defence. He informed that Karnataka has a 25 percent share in the aircraft and space-craft industry of India. He also noted that approximately 70 percent of aircraft and helicopters that are made for India’s defence are manufactured in Karnataka. Shri Modi added that more than 400 companies from the Fortune 500 list are functioning in Karnataka. He credited the double-engine government of Karnataka for such tremendous growth in the state.

“Be it governance or the growth of physical and digital infrastructure, India is working on a completely different level”, the Prime Minister remarked. Giving examples of BHIM UPI and Made in India 5G technology, the Prime Minister said that it is the professionals of Bengaluru that have turned this distant dream into a reality. The Prime Minister pointed out that such positive changes were beyond imagination before 2014 as the thought process of the previous government was outdated. “The previous governments considered speed as a luxury, and scale as a risk”, the Prime  Minister continued, “Our government has changed this trend. We consider speed as the aspiration and scale as the power of India.” Throwing light on PM Gatishakti Master Plan, the Prime Minister remarked that the government made efforts to bring all the departments and agencies on a single platform and as a result, more than fifteen hundred layers of data are being made available to the different agencies. He further added that several ministries of central and state governments along with dozens of departments are coming together with the help of this platform. “Today, India is working towards the objective of Rs 110 lakh crores in the infrastructure investment pipeline”, he said, “Emphasis is laid on the multimodal infrastructure so that every medium of transport supports the other.” Speaking about the National Logistics Policy the Prime Minister said that it will help in reducing the cost of transportation in the country while also innovating it.

Recalling his address from the Red Fort about pride in the heritage of the country, the Prime Minister said that our heritage is cultural as well as spiritual. He informed that with Bharat Gaurav Rail is connecting the places of faith and spirituality and at the same time strengthening the spirit of Ek Bharat Shreshtha Bharat. He informed that so far 9 such journeys of this train have been completed in different parts of the country. “Be it Shirdi Temple, Shri Ramayana Yatra, Divya Kashi Yatra, all such trains have been a very pleasant experience for the passengers.” He further added that the journey from Karnataka to Kashi, Ayodhya and Prayagraj which began today will help the people of Karnataka to visit Kashi and Ayodhya.

The Prime Minister also drew everyone’s attention to the importance of coarse grains that was established by Kanak Das ji. Highlighting his composition – Ram Dhanya Charite, the Prime Minister said that it conveys the message of social equality citing the example of the most liked millet ‘ragi’ in Karnataka.

The Prime Minister emphasised that the development of Bengaluru should be done as envisioned by Nadaprabhu Kempegowda Ji. “The settlement of this city is a great contribution of Kempegowda Ji to the people here,” he added. The Prime Minister highlighted the unparalleled detail when it comes to commerce and culture that was planned centuries ago for the convenience of the people of Bangalore. “The people of Bangalore are still getting the benefit of his vision”, Shri Modi added. He further elaborated that even though businesses may have transformed today, ‘Pete’ (an area in Bengaluru) still remains the commercial lifeline of Bengaluru. Throwing light on the contributions of Nadaprabhu Kempegowda Ji in enriching the culture of Bangalore, the Prime Minister gave examples of the famous Gavi Gangadhareshwar temple and the temple in Basavanagudi area. “Through these, Kempegowda Ji has kept the cultural consciousness of Bangalore alive forever” he said.

Concluding the address, the Prime Minister remarked that Bangalore is an international city and we have to enrich it with modern infrastructure while preserving our heritage. “All this is possible only with Sabka Prayas”, he concluded.