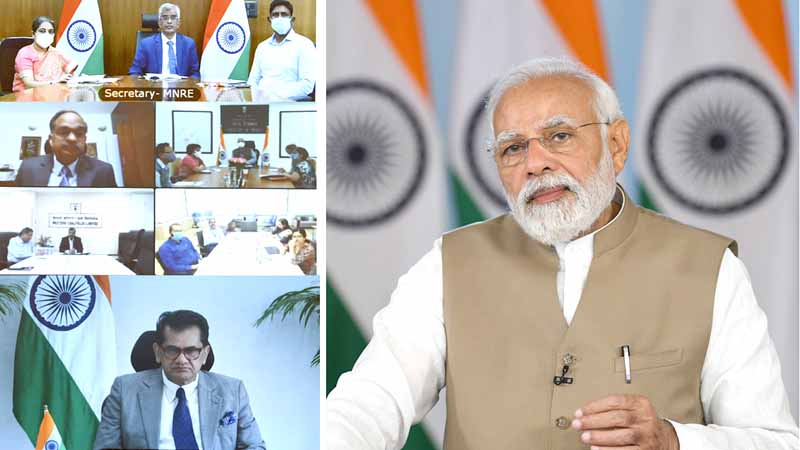 The Prime Minister said that ‘Energy for Sustainable Growth’ not only resonates with the Indian tradition but is a pathway to achieve future needs and aspirations. He said that sustainable growth is possible only through sustainable energy sources. The Prime Minister reiterated his commitment made at Glasgow to reach Net Zero by 2070. He also mentioned his vision of  LIFE pertaining to an environmentally sustainable lifestyle. India is providing leadership  in the global collaborations like International Solar Alliance. He also talked of target of achieving 500 gigawatt non-fossil energy capacity and achiving  50 per cent of installed energy capacity through non-fossil energy by 2030. “Whatever targets India has set for itself, I do not see them as a challenges but as opportunity. India is moving with this vision in last few years and the same has been taken forward at policy level in this year’s budget”, he said. This budget has announced 19.5 thousand crore for high-efficiency solar module manufacturing which will help in making India a global hub for manufacturing and R&D of solar modules and related products.

Referring to recently announced National Hydrogen Mission, the Prime Minister said India can become hub of green hydrogen given its inherent advantage in the form of abundant renewable energy power. He asked for private sector efforts in the area.

Shri Modi also pointed towards challenge of energy storage which has received significant attention in the budget.  “Provisions have also been made in this year’s budget regarding battery swapping policy and inter-operability standards. These will reduce the problems faced in the use of electric vehicles in India,” he said.

The Prime Minister emphasized that along with energy production, energy saving is equally important for sustainability. “You should work on how to make more Energy Efficient A/C, Efficient heaters, geysers, ovens in our country”, he exhorted the participants.

Stressing the need to prioritize energy efficient products, the Prime Minister gave the example of promotion of LED bulbs at large scale. He said that first the government brought down the cost of LED bulbs by promoting production and then 37 crore LED bulbs were distributed under Ujala scheme. This has led to saving of forty eight thousand million Kilo Watt Hour electricity and saving of about 20 thousand crore rupees in the electricity bills of poor and middle class families. Furthermore, annual carbon emission saw a decline of 4 crore tonnes. Local bodies are saving 6 thousand crore rupees every year due to adoption of LED bulbs in street lights, he added.

Coal gasification is a clean alternative to coal, the Prime Minister noted. in this year’s budget, for coal gasification, 4 pilot projects have been announced which will help in firming up technical and financial viability of these projects. Similarly, the government is also continuously promoting ethanol blending. The Prime Minister told the gathering about the extra differential excise duty for unblended fuel. Recalling recent inauguration of Gobardhan Plant in Indore, the Prime Minister said that private sector can establish 500 or 1000 such plants in the country over next two years.

The Prime Minister talked about the future upsurge in the energy demand in India and underlined the criticality of transition towards renewable energy. He listed a series of steps in this direction such as clean-cooking in 24-25 crore households of India;   solar panels on canals, solar tree in household gardens or balconies to, possibly, get 15 per cent energy for the household from the solar-tree. He also suggested exploring micro hydel projects to enhance electricity production. “World is witnessing depletion of all types of natural resources. In such a scenario circular economy is the demand of the hour and we have to make it a mandatory part of our lives”, he said.