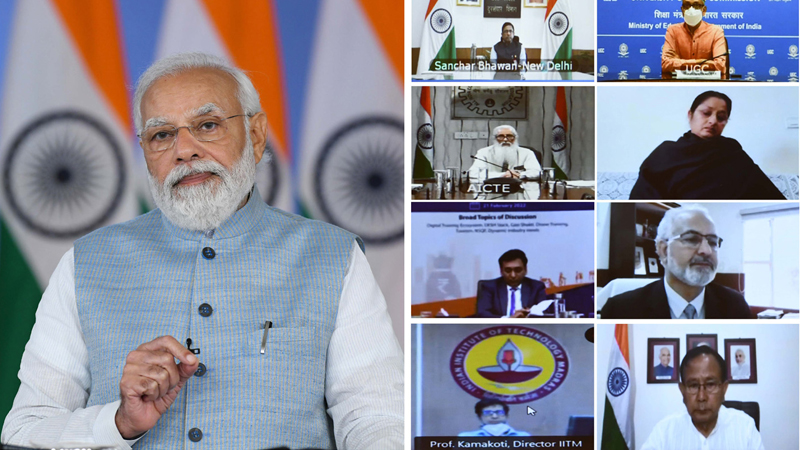 The Prime Minister, Shri Narendra Modi addressed a webinar on positive impact of Union Budget 2022 on the education and skill sectors. Concerned Union Ministers, key stakeholders from education, skill development, science, technology and research were present on the occasion. The webinar was part of the new practice of discussion and dialogue with the stakeholders before and after the budget.

The Prime Minister started by emphasizing the importance of the young generation in the process of nation building. He said “Empowering our youth who are future nation builder, is empowering India’s future”.

The Prime Minister elaborated on five aspects that were highlighted in the Budget 2022. Firstly, Key decisions have been taken for universalization of quality education i.e expansion of education with improved quality along with enhanced capabilities of the education sector. Secondly, attention has been given to skill development. Focus is on creating a digital skill ecosystem, skill development as per industry demand and better industry linkages. Thirdly, inclusion of India’s ancient experience and knowledge of urban planning and designing into education is important. Fourthly, Internationalization has been emphasized. This involves arrival of world class foreign universities and encouragement of institutions of GIFT City getting Fintech related institutes.  Fifth,  focus on Animation Visual Effects Gaming Comic (AVGV) where there is huge potential of employment and there is a big global market. “This budget will help a great deal in realizing the National Education Policy”, he said.

The Prime Minister mentioned that it was digital connectivity that kept the country’s education system going during the pandemic. He noted the decreasing digital divide in India. “Innovation is ensuring inclusion in our country.  Now going even further, country is moving towards integration”, he said. He stressed that measures like e-Vidya, One Class One Channel, digital labs, digital universities are creating an educational infrastructure which will go a long way in helping the youth of the country. “This is an attempt to provide better education solutions to villages, poor, Dalits, backwards and tribal people in the country’s socio-economic set up”, he added. In the recently announced National Digital University, the Prime Minister saw an innovative and unprecedented step that has the potential of fully addressing the problem of seats in the universities. He called upon Education Ministry, UGC and AICTE and all the stakeholders of the Digital University to work with speed on the project. He emphasized the need to keep international standards in mind while creating institutes.

On the International Mother Language Day today, the Prime Minister underlined the link between education in the medium of mother language and the mental development of children. He informed that in many states medical and technical education is also being imparted in the local languages. The Prime Minister called for momentum in creating best content in digital format in local Indian languages. He emphasized that such content needs to be available via Internet, Mobile phones, TV and radio. He reiterated the requirement to keep the work with regard to content in sign languages going with due priority.

The Prime Minister said “dynamic skilling is critical from the point of view of global talent demand for Aatmnirbhar Bharat.” He highlighted the need to prepare the ‘demographic dividend’ of the country as per the demands of the changing job roles. Digital Ecosystem for skilling and Livelihood and e-Skilling labs were announced in the budget with this vison in mind, he said.

In conclusion, the Prime Minister explained how recent changes in the budgetary process are turning budget as a tool of transformation. He asked the stakeholders to implement the budget provisions seamlessly on the ground. He said that by advancing budget by one month in recent times, it is being ensured that when it is implemented from first April, all preparation and discussion is already undertaken. He asked the stakeholders to ensure optimum outcome from the budget provisions. “In the context of Azadi Ka Amrit Mahotsav and National Education, this is the first budget, which we want to implement quickly for laying down the foundation of the Amrit Kaal”, he continued “budget is not just an account of statistics, budget, if implemented properly, can bring great transformation even with limited resources”, he concluded.