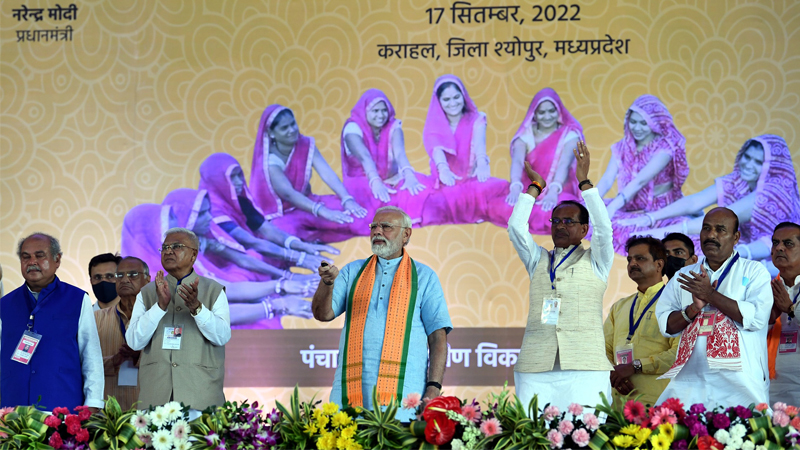 The Prime Minister, Shri Narendra Modi participated in the Self Help Group Sammelan organised at Karahal, Sheopur, Madhya Pradesh. On the occasion, the Prime Minister also inaugurated four Particularly Vulnerable Tribal Groups (PVTG) skilling centres under PM Kaushal Vikas Yojana. The Prime Minister also handed over Bank Loan Sanction letters to SHG members and Kits under the Jal Jeevan Mission were also handed over by him. About one lakh women who are members of SHGs were present on the occasion and about 43 lakh women were connected from various centres.

Addressing the gathering, the Prime Minister said that if time permits, he tries to take blessings from his mother on his birthday. Today, though he could not go to meet his mother, he said, his mother would be happy that he is getting blessings of the lakhs of the tribal mothers. He said `India’s daughters and mothers are my ‘raksha kawach’ (protective shield)’. He said that such a big conference of Self Help Groups on Vishwakarma Jayanti is very special in itself and also greeted on the occasion of Vishwakarma Pooja.

The Prime Minister expressed great pride and happiness upon the return of cheetahs to India after seventy-five years. He recalled, “Before coming here, I had the privilege of releasing cheetahs in Kuno National Park.” He requested and received standing applause for the Cheetahs, whom he called the honoured guests,  from everyone present at the venue. “Cheetahs have been given in your custody because there is faith in you. I have confidence that you will face all the adversity but will not allow any harm to come to Cheetahs. That is why, today, I have come to hand over the responsibility of these eight cheetahs to you.”, he told the people of the region. Noting the plantation of 10 lakh saplings by SHGs today, the Prime Minister said that this will give new energy to the environment protection efforts of India.

Highlighting the growing representation of women in India, the Prime Minister said that women power has become the differentiating factor between the India of the last century and the new India of this century. “In today’s new India, the flag of women’s power is flying from Panchayat Bhawan to Rashtrapati Bhavan”, Shri Modi added. He noted that in the recent Panchayat election 17 thousand women got elected to Panchayat bodies. This is a sign of a big change, he said.

The Prime Minister recalled the contribution of women in the freedom struggle and security of the nation. He lauded the role of women and SHGs in the recent Har Ghar Tiranga campaign and their efforts during the corona period. He said over time ‘Self Help Groups’ turn into ‘Nation help Groups’. The Prime Minister remarked that the success of any sector is directly linked with the increase in the representation of women. A fine example of this model is the success of Swachh Bharat Abhiyan, a women-led initiative. Similarly, 7 crore households have got piped water connections in India during the last three years and out of which 40 lakh families are from Madhya Pradesh. The Prime Minister credited the women of India for this success.

The Prime Minister highlighted that in the last 8 years, the government has taken numerous steps to empower the Self Help Groups. “Today more than 8 crore sisters across the country are associated with this campaign. Our goal is that at least one sister from every rural family should join this campaign”, Shri Modi remarked.

Throwing light on the ‘One District, One Product’ initiative, the Prime Minister said that it is an effort to take the local products from every district to the big markets. Shri Modi said that the government is working continuously to create new possibilities for women entrepreneurs in the village economy. He informed that SHGs have sold products worth 500 crores in the markets created especially for their products. The benefits of PM Van Dhan Yojna and PM Kaushal Vikas Yojana are also reaching women. He also informed about ‘Saras’ space for the product of SHG on the GeM portal.

Recalling the efforts of the government since 2014, the Prime Minister said that the country has continuously worked towards enhancing the dignity of women and solving the challenges faced by them on a daily basis. Shri Modi recalled how women faced extreme difficulty with issues related to the absence of toilets and the troubles caused by the smoke coming from the wood in the kitchen. The Prime Minister expressed delight that their lives have been made easier with the construction of more than 11 crore toilets in the country, providing gas connections to more than 9 crore families and providing water from the tap to crores of families in the remotest parts of India.  He informed that under the Matru Vandana Yojana, 11000 crore rupees have been directly transferred to the accounts of expecting mothers. Mothers in Madhya Pradesh also got 1300 crore rupees under the scheme. He also noted the growing role of women in the financial decision-making of households.

Talking about the Jan Dhan bank accounts, the Prime Minister said that it has become a huge medium of women empowerment in the country. The Prime Minister was quick to recall that during the corona period, it was the power of the Jan Dhan bank accounts that enabled the government to safely and directly transfer the money into the bank accounts of women.  “Today, the names of women are attached in the houses received under PM Awas Yojana. Our government has enabled more than 2 crore women in the country to become house owners. Under the Mudra scheme, till now a loan of Rs 19 lakh crore has been given to small businesses and businesses across the country. About 70 per cent of this money has been received by women entrepreneurs. I am happy that due to such efforts of the government, the role of women in the economic decisions of the household is increasing today”, he said.

The Prime Minister remarked, “The economic empowerment of women empowers them equally in society.” Underlining how the daughters of India are now enrolling in Sainik Schools, becoming Police Commandos and joining the Army, the Prime Minister credited the government for opening up closed doors and creating new opportunities for them. Drawing everyone’s attention to the noticeable changes in every field in the last 8 years, the Prime Minister expressed great pride in informing everyone that the number of women in the police force across the country has doubled from 1 lakh to more than 2 lakhs. The Prime Minister also highlighted that more than 35 thousand of our daughters are now part of the  Central Forces and battling out against the enemies of the country. “This number is almost double what it was 8 years ago”, the Prime Minister added, “I have full faith in your strength. With Sabka Prayas, we will surely be successful in making a better society and a strong nation.”

The Sammelan is witness to the attendance of thousands of women Self Help Group (SHG) members/community resource persons that are being promoted under the Deendayal Antyodaya Yojana-National Rural Livelihoods Mission (DAY-NRLM).

DAY-NRLM aims to mobilise rural poor households into SHGs in a phased manner and provide them long-term support to diversify their livelihoods and improve their incomes and quality of life. The Mission is also working towards empowering the women SHG members through awareness generation and behaviour change communication on issues like domestic violence, women’s education and other gender-related concerns, nutrition, sanitation, health etc.