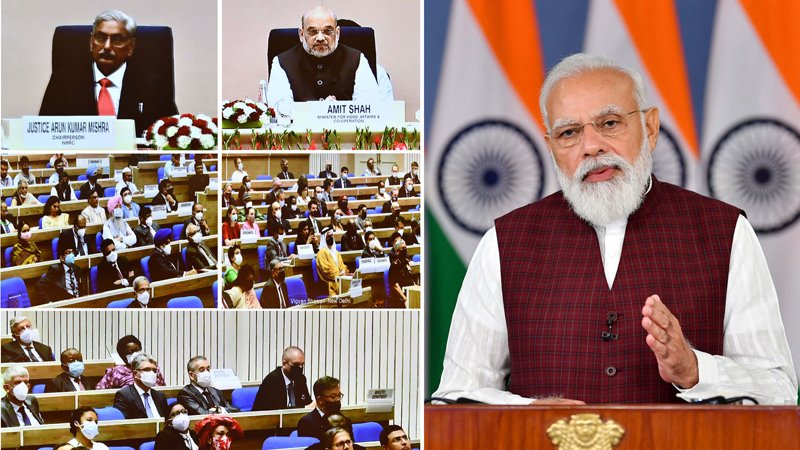 Addressing the gathering, the Prime Minister remarked that India’s freedom movement and its history has been a great source of inspiration for human rights and the values ​​of human rights for India. “As a nation, as a society we resisted injustice-atrocities, we fought for our rights for centuries. At a time when the whole world was engulfed in the violence of World War I, India suggested the path of ‘rights and non-violence’ to the whole world. Not only India but the whole world sees our Bapu as a symbol of human rights and human values”, said the Prime Minister remembering Mahatma Gandhi. Even when, on many occasions,  the world was disillusioned and confused, India remained steadfast and sensitive towards human rights, he added.

The Prime Minister said that the concept of human rights is closely related to the dignity of the poor. He said when the poorest of the poor does not get an equal share of the government schemes then the question of rights arises. The Prime Minister enumerated the government’s efforts to ensure the dignity of the poor. He said when a poor person gets toilets ensuring freedom from open defecation, he gets dignity, similarly, a poor man who was hesitant to enter a bank, gets a Jan Dhan account, which ensures dignity, he said. Similarly, measures like Rupay card, Ujjwala gas connections, and property rights of pucca houses for women are major steps in that direction.

Continuing with the listing of measures, in the past few years, the Prime Minister said that the country has also tried to remove the injustice happening at different levels in different sections. “For decades Muslim women had been demanding a law against triple talaq. We have given new rights to Muslim women by enacting a law against triple talaq” the Prime Minister said. Many sectors have been opened for women and it has been ensured that they can work with security round the clock. He said India has ensured 26 weeks of paid maternity leave for career women, a feat that even many developed nations could not achieve. Similarly, the Prime Minister listed the measures by the government for trans-genders, children and nomadic and semi-nomadic communities.

Recalling the inspired performance of the para-athletes in the recent Paralympics, the Prime Minister said that in recent years laws have been enacted for the Divyang Jan. They have been connected to new facilities. Buildings are being made, divyang friendly and language for divyang is being standardized.

Shri Modi said that during the pandemic, poor, helpless and senior citizens were given direct financial support in their account. Migrant labourers were spared much hassle due to the implementation of the One Nation-One Ration Card.

The Prime Minister cautioned against the selective interpretation of human rights and using human rights to diminish the image of the country. He said of late, some people have started interpreting human rights from their own angle as per their selfish interests. Tendency to see infringement in one situation and not in a similar situation has damaged human rights a great deal, he said. He also said that the biggest infringement of human rights takes place when they are seen from the prism of politics and political profit and loss. “This selective behaviour is equally damaging for democracy too”, cautioned the Prime Minister.

The Prime Minister said that it is important to understand that human rights is not associated with rights only but is a subject of our duties too. Saying  “rights and duties are two tracks on which the journey of human development and human dignity takes place, he stressed that duties are equally important as rights and they should not be discussed separately as they complement each other.

The Prime Minister concluded by mentioning the human rights of future generations. He emphasized that with measures like International Solar Alliance, renewable energy goals and Hydrogen Mission, India is rapidly moving in the direction of sustainable life and eco-friendly growth.