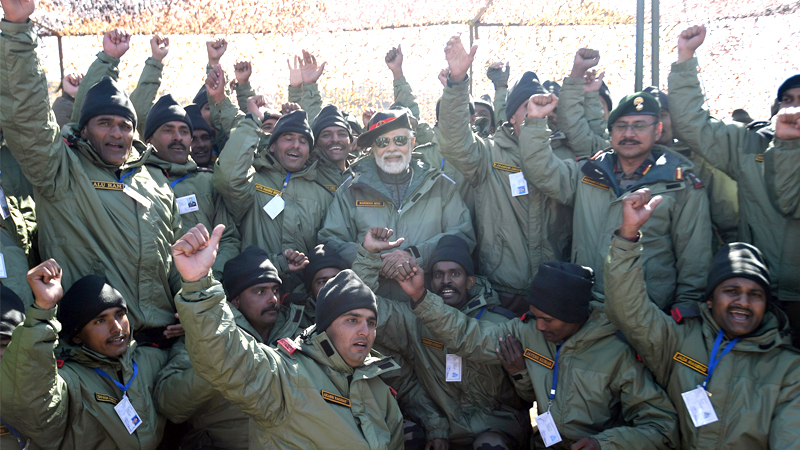 Keeping in with his tradition of spending Diwali with armed forces, the Prime Minister spent this Diwali with the forces in Kargil.

Addressing the brave jawans, the Prime Minister said that the reverence for the soil of Kargil always draws him towards the brave sons and daughters of the armed forces. “For years, you have been a part of my family”, the Prime Minister said. The Prime Minister underlined that the sweetness of Diwali increases in the presence of the jawans and the light of Diwali that is present among them emboldens his spirit.“On one side there are the sovereign borders of the nation, and on the other committed soldiers, On one we have the love of the soil of the motherland, and on the other, there are braveheart jawans. I could not have expected a Diwali of such magnitude anywhere else”. The Prime Minister remarked that India gleefully celebrates these sagas of valour and bravery that are part of our traditions and cultures. “Today, from the victorious lands of Kargil,” the Prime Minister said, “I wish a very happy Diwali to everyone in India and the world.”

“The India that we revere is not just a geographical territory but a living spirit, a constant consciousness, an immortal existence”, the Prime Minister exalted. “When we speak of India,” Shri Modi continued, “the eternal picture of India’s culture comes to the fore, the circle of legacy manufactures itself and the model of India’s might starts to grow.” He further added that India is a stream of such weaponry that begins on one end begins with the sky-high Himalayas and encompasses the Indian Ocean. The Prime Minister remembered that the many flourishing civilisations of the past were decimated to grains of sand but the existence of India’s cultural stream remained uninterrupted. He explained that a nation becomes immortal when the brave sons and daughters of the land show complete faith in their strength and resources.

The battlefield of Kargil is shining proof of the courage of the Indian Army. “Dras, Batalik and Tiger Hill are proof that enemies sitting on a mountaintop were dwarfed before the courage and valour of the Indian Armed Forces”, Shri Modi remarked. He said that those manning India’s borders are the resilient pillars of India’s security. He further added that a country is secure only when its borders are secure, its economy is robust and the society is filled with self-confidence. The Prime Minister remarked that the morale of the entire nation goes up when we hear news about the strength of the country. Highlighting the feeling of solidarity among the countrymen, the Prime Minister gave the example of Swacch Bharat Mission and the timely delivery of pucca houses with electricity and water and remarked that every jawan feels proud of it. He remarked that far away when these services reach the jawans’ houses, it gives them satisfaction. He further added that when the jawan notices the boost in connectivity, it gets easier for him to call home and even easier to get home during vacations. He also highlighted India’s recent achievement of becoming the 5th largest economy in the world from the 10th largest 7-8 years ago. The Prime Minister also spoke about the 80,000-plus startups that keep the innovation mill running. He also recalled that two days ago, ISRO created a new record by simultaneously launching 36 satellites to expand broadband internet. The Prime Minister also threw light on the Ukraine War where the Tricolour acted as a protective shield for Indians.

The Prime Minister explained that it is the result of India successfully taking the fight against both external and internal enemies. “You are standing as a shield on the border while strict action is being taken against the enemies within the country.” Shri Modi pointed out that the country has made a successful attempt to uproot terrorism, Naxalism and extremism. Speaking on Naxalism that had once engulfed a large part of the country, the Prime Minister said that its scope is continuously shrinking. Speaking on corruption, the Prime Minister remarked that India is fighting a decisive war. “No matter how powerful the corrupt may be, he cannot escape the law.” He further added that misgovernance had limited the country’s potential by creating obstacles in the way of our development. ”With the mantra of Sabka Saath, Sabka Vikas, Sabka Vishwas and Sabka Prayas, we are fast removing all those old shortcomings”, he added.

Throwing light on the advancement in technologies in modern warfare, the Prime Minister remarked that the nature of future wars is going to change and in this new era, we are preparing the military strength of the country according to the new challenges, new methods and changing requirements of national defence. Speaking on the need for major reforms in the army whose requirements were felt for decades, the Prime Minister assured that all possible steps are being taken so that there is better coordination of our forces to take swift action against every challenge. “For this, an institute like CDS has been created. A network of modern infrastructure is being created on the border so that our jawans are more comfortable in performing their duty”, he said. He further added that many Sainik Schools are being opened in the country.

Highlighting Atmanirbhar Bharat, the Prime Minister pointed out that the most important aspect of the country’s security is the possession of modern indigenous weapons in Indian armies. The Prime Minister informed that all three sections of defence have decided to minimize our dependence on foreign weapons and systems and pledged to be self-reliant. “I admire our three armies, who have decided that more than 400 pieces of defence equipment will no longer be bought from abroad, and will now be made in India itself”, he said. Pointing out the benefits of using indigenous weapons, the Prime Minister said that when the jawans of India fight with the weapons made in the country, their faith will be at its peak and their attacks will come with a surprise element for the enemy while crushing the enemy’s morale. The Prime Minister gave the examples of Prachand – Light Combat Helicopters, Tejas Fighter Jets, and the colossal aircraft carrier Vikrant, and also highlighted India’s missile strength in Arihant, Prithvi, Akash, Trishul, Pinak and Arjun. He further added that today, India has become an exporter of defence equipment while strengthening its missile defence system, and also working rapidly on modern and effective technology like drones.

“We follow the traditions where war is considered as the last option”, Shri Modi remarked. He said that India is always in favour of world peace. Shri Modi exclaimed, “We are against war, but peace is not possible without strength.” He further added that our armies have the capability and the strategy, and if someone looks at us, then our armies also know how to give a befitting reply to the enemy in their own language. Speaking on efforts taken to abolish the slavery mentality, the Prime Minister gave the example of the newly inaugurated Kartavya Path and said that it is promoting the new faith of New India. “Be it the National War Memorial or the National Police Memorial, these make for a new identity for new India”, he said. The Prime Minister also recalled the new Indian Navy Ensign and said, “now the inspiration of Shivaji’s bravery has been added to the naval flag.”

The Prime Minister underlined that the eyes of the whole world today are on India and its growth potential. Shri Modi said that the Azadi Ka Amrit Kaal is going to be a real witness to this power of India. “Your role in this is huge because you are the Pride of India”, the Prime Minister remarked. He concluded his address by reciting a poem dedicated to the jawans of the Indian Armed Forces.