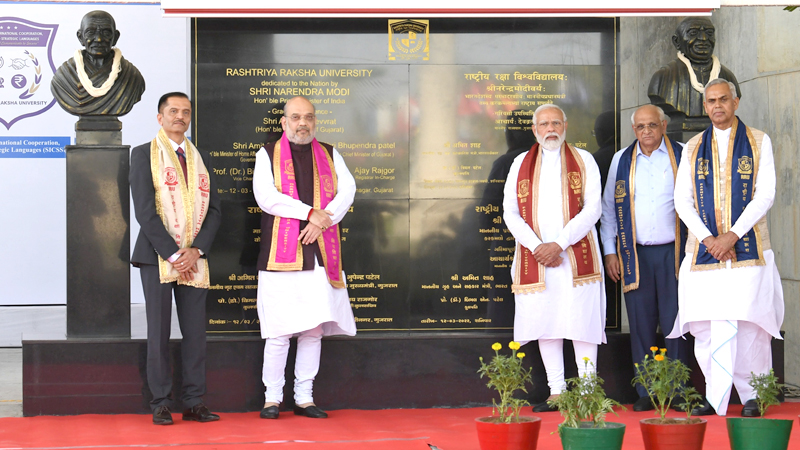 The Prime Minister, Shri Narendra Modi, today dedicated a building of Rashtriya Raksha University to the nation and delivered its first Convocation address at Ahmedabad. Union Minister for Home Affairs and Minister of Cooperation, Shri Amit Shah, Governor of Gujarat Acharya Devvrat and Chief Minister of Gujarat Shri Bhupendrabhai Patel were among those present on the occasion.

At the outset, the Prime Minister paid tribute to Mahatma Gandhi and those who participated in the Dandi March. The great march was started on this day. “The movement under the leadership of Gandhiji against the injustice of the British had made the British government realize the collective power of us Indians”, the Prime Minister said.

The Prime Minister said that earlier notion of internal security during the colonial time was based on instilling fear among the masses for keeping peace for the colonial masters. Similarly, earlier scenario was very different as the security forces had more time to prepare which is no longer so as technology and transportation and communication has improved so much. He also said today’s policing requires skills like negotiating and other soft skills that are needed to function in a democratic scenario.

He stressed the need to change the image of police and security personnel. Depiction of police in the popular culture has not helped in this regard, either. He noted the humane work by the police personnel during the pandemic. “Post-independence, there was a need of reforms in the country’s security apparatus. A perception was developed that we have to be careful of the uniformed personnel. But it has transformed now. When people see uniformed personnel now, they get the assurance of help”, he said.

The Prime Minister also noted shrinking of the support network of joint family for police personnel in dealing with the stress of the job. He emphasized need for experts to deal with stress and relaxation including yoga experts in the forces. “Stress-free training activities is need of the hour for strengthening the country’s security apparatus”, he added.

He underlined the importance of technology in the security and policing work. He said if criminals are using technology, technology can be harnessed to nab them also. He said this emphasis on technology would also enable even the divyang people to contribute in the field.

He said that Gandhinagar area has National Law University, Raksha University and forensic science university. He stressed the need for synergy between these institution through regular  combined symposiums to create a holistic education in these related fields. He said “Never make the mistake of treating this as police university. This is a Raksha university that takes care of the security of the country in its entirety.” He reiterated importance of disciplines like mob and crowd psychology, negotiations, nutrition and technology.

He urged the students that they should always keep the values of humanity as integral to their uniform and there should never be dearth of service spirit in their efforts. He noted with satisfaction the growing number of girls and women in security field. “We are seeing greater participation of women in defence sector. Be it Science, Shiksha or Suraksha, women are leading from the front”, he said.

The Prime Minister highlighted the role of the first batch of any such institute in taking the vision of the institution forward. He noted the contribution of old pharmacy college in Gujarat to turn the state in to a leader in pharmaceutical field. Similarly IIM Ahmedabad led the creation of robust MBA education system in the country.

Rashtriya Raksha University (RRU) was set up to meet the need for high quality trained manpower in various wings of policing, criminal justice and correctional administration. Government set up a national police university named Rashtriya Raksha University by upgrading the Raksha Shakti University which was established by the Government of Gujarat in 2010. The University, which is an Institution of National Importance, commenced its operations from 1st October, 2020. The University will develop synergies with the private sector by leveraging knowledge and resources from the industry and would also set up Centres of Excellence in various fields relating to police and security.