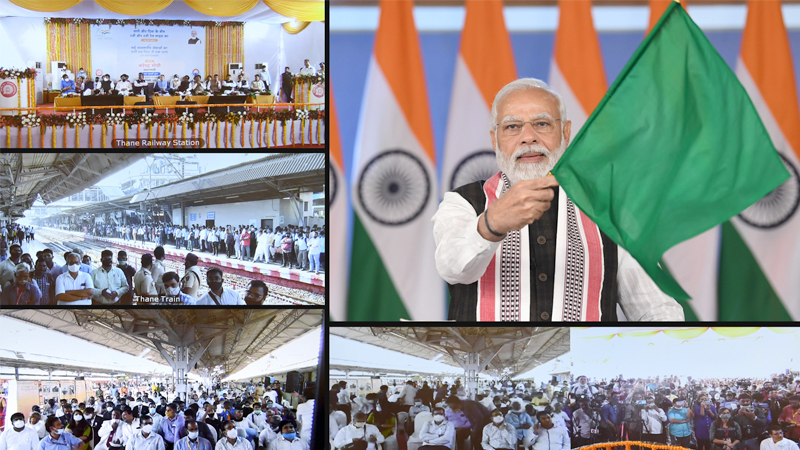 Prime Minister Shri Narendra Modi dedicated to the Nation two additional railway lines connecting Thane and Diva today via video conferencing. He also flagged off two suburban trains of the Mumbai Suburban Railway. Governor and Chief Minister of Maharashtra, Union Railway Minister were among those present on the occasion.

Greeting Mumbaikar on the fifth and sixth rail line connecting Thane and Diva, the Prime Minister said that these lines will bring ease of life for the residents of the ever-mobile metropolitan. The Prime Minister underlined four direct benefits of the two lines. Firstly, separate lines for local and express trains; secondly, trains coming from other states will not have to wait for passing of local trains; thirdly, mail/express trains can be run without much obstruction in Kalyan to Kurla section and, finally, Kalwa Mumbra commuter will not be troubled due to blockage every Sunday. He said that these lines and 36 new  local trains on the central railway lines which are mostly AC are part of central government’s commitment to expanding and modernising the facility of local trains.

Recalling the contribution of the metropolitan city of Mumbai in the progress of independent India, the Prime Minister said that now the effort is to increase Mumbai’s capability manifold with regard to its contribution for Aatmnirbhar Bharat. “That is why our special focus is on creating 21st century infrastructure for Mumbai”, the Prime Minister said. Thousands of crore rupees are being invested in rail connectivity in Mumbai as Mumbai Suburban Rail system is being equipped with the latest technology. The Prime Minister also said that efforts are on for adding additional 400 Kms in the Mumbai Suburban and 19 stations are planned to be modernised with facilities like modern CBTC signal system.

The Prime Minister said that “Ahmadabad-Mumbai High Speed Rail is country’s need and it will strengthen Mumbai’s identity as city of dreams. Completing this project rapidly is our priority”, he said.

Prime Minister said even Corona pandemic could not shake the government’s commitment to make Indian Railways more safe, convenient and modern. During the last two years, the Prime Minster said, Railways made new records in freight transportation. 8 thousand Km railway line was electrified and 4.5 thousand Km line was doubled in this time period. During Corona period, farmers were connected to country-wide markets through Kisan Rails, he said.

Talking about the changed approach of New India regarding completion of infrastructure projects, the Prime Minister pointed out that in the past projects lingered due to lack of coordination from planning to execution stages. This made creation of 21st century infrastructure impossible, that is why, he said that PM Gatishakti Plan was conceived. The plan will bring every department of central government, state government’s local bodies and private sector on one platform. This will provide relevant information well in advance to all stakeholders for proper planning and coordination.

Shri Modi lamented the thought process that  prevent sufficient investment in the resources used by the poor and middle class. This, he said, kept shine off the public transport in the country. “Now India is moving forward, leaving behind this thinking”, he said.

The Prime Minister listed measures that are giving new face to Indian Railways. He said that modern stations like Gandhinagar and Bhopal are fast becoming the identity of Indian railways and more than 6000 railway stations have been connected with wifi facility. Vande Bharat Trains are giving new momentum and modern facilities to railway in the country. 400 new Vande Bharat will be launched in the coming years in the service of the nation, the Prime Minister said.

Kalyan is the main junction of Central Railway. The traffic coming from North side and Southern side of the country merge at Kalyan and moves towards CSMT (Chhatrapati Shivaji Maharaj Terminus). Out of the four tracks between Kalyan and CSTM, two tracks were used for slow local trains and two tracks for fast local, Mail Express and Goods trains. To segregate suburban and long distance trains, two additional tracks were planned.

The two additional railway lines connecting Thane and Diva have been built at the approx cost of Rs 620 crores and features 1.4 km long rail flyover, 3 major bridges, 21 minor bridges. These lines will significantly remove the interference of long distance train’s traffic with suburban train’s traffic in Mumbai. These lines will also enable the introduction of 36 new suburban trains in the city.