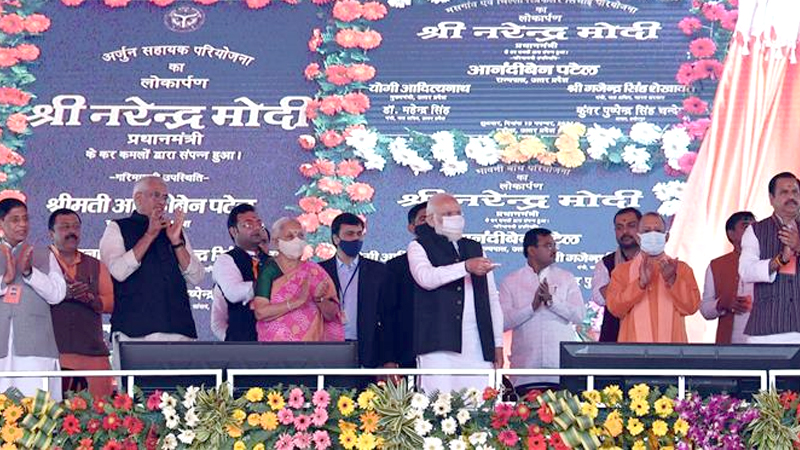 Prime Minister Shri Narendra Modi dedicated to the Nation various developmental projects in Mahoba, Uttar Pradesh. These projects will help alleviate the issue of water shortage in the region and bring much needed relief to the farmers. These projects include the Arjun Sahayak Project, Ratauli Weir Project, Bhaoni Dam Project and Majhgaon–Chilli Sprinkler Project. The cumulative cost of these projects is more than Rs. 3250 Crore and their operationalisation will help in irrigation of around 65000 hectares of land in the districts of Mahoba, Hamirpur, Banda and Lalitpur, benefitting lakhs of farmers of the region. These projects will also provide potable drinking water to the region. Governor Smt Anandiben Patel and Chief Minister of Uttar Pradesh Shri Yogi Adityanath,Union Minister Shri Gajendra Singh Shekhawat, State Ministers were among those present on the occasion.

Addressing the gathering, the Prime Minister wished on  Prakash Purab of Guru Nanak Dev ji  who awakened new consciousness in India during that era of slavery. He also noted the jayanti of the brave daughter of India, the pride of Bundelkhand,Rani Laxmibai today.

The Prime Minister noted that in the last 7 years, Mahoba witnessed how the government has come out of  the closed rooms of Delhi to every nook and corner of the country. “This land has been a witness to such schemes, such decisions, which have made big and meaningful changes in the lives of poor mothers-sisters-daughters of the country” , the Prime Minister said. The Prime Minister recalled his promise of freeing the muslim women from the scurge of Triple Talaq that he made from the land of Mahoba, the promise stands fulfilled today. Ujjwala 2.0 was also launched from here.

The Prime Minister pondered how this area became a hotbed of water challenges and migration over time. He recalled the historical times when the region was known for its water management. Gradually, under the earlier governments, the region suffered massive neglect and corrupt governance. “Situation came to a point where people started shying away from marrying their daughters in this area, and daughters here started wishing for marriage in the area with surplus water. People of Mahoba, people of Bundelkhand know the answers to these questions”, the Prime Minister said.

The Prime Minister said that the previous government  did good for their families by looting Bundelkhand. “They were never concerned about the water problem of your families”, the Prime Minister stressed. The Prime Minister said for decades, the people of Bundelkhand have seen governments that looted them for a long time. He emphasized that, for the first time, the people of Bundelkhand are seeing the government working for its development. “The previous governments did not get tired of looting Uttar Pradesh, we do not get tired of working”. He added when the mafia of the state is facing bulldozer,  many people are crying, however, this hue and cry will not stop the development work in the state, he said. .

The Prime Minister said keeping the farmers embroiled in problems has always been the basis of some political parties. They do politics of problems and we follow the national policy of solutions. The solution to the Ken-Betwa link has also been found by our own government, after consultation with all the stakeholders.

The Prime Minister said the dynastic governments kept the farmers only in deprivation. “They used to make announcements in the name of farmers, but even a single pie did not reach the farmer. Whereas from PM Kisan Samman Nidhi, we have so far transferred Rs 1,62,000 crore directly to the bank accounts of farmers”, the Prime Minister remarked.

The Prime Minister said the government is committed to make this region self-reliant in employment, to prevent migration from Bundelkhand. The Bundelkhand Expressway and UP Defense Corridor is also a great proof of this.

The Prime Minister also remarked about the rich culture of the region and expressed his commitment to promote the region under the ‘double engine government’ of the ‘karma yogis’.