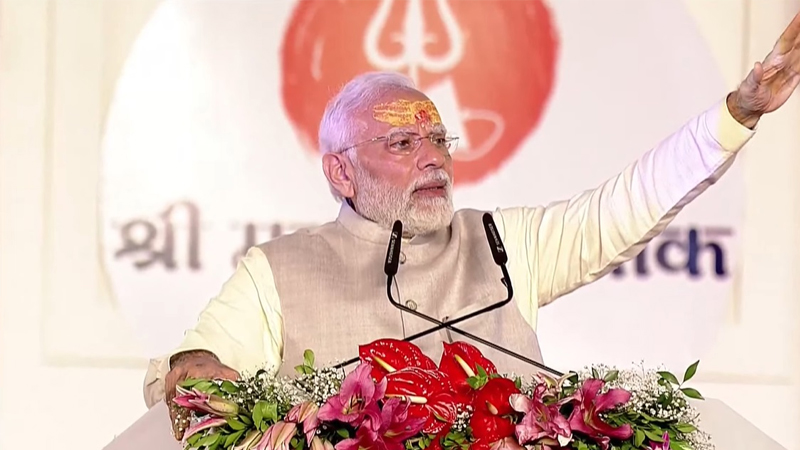 The Prime Minister, Shri Narendra Modi dedicated Phase I of the Mahakal Lok Project to the nation at Shri Mahakal Lok in Ujjain, Madhya Pradesh today.

The Prime Minister, Shri Narendra Modi dedicated Phase I of the Mahakal Lok Project to the nation at Shri Mahakal Lok in Ujjain, Madhya Pradesh. Phase I of the Mahakal Lok project will help in enriching the experience of pilgrims visiting the temple by providing them with world-class modern amenities. The project aims to decongest the entire area and also put special emphasis on the conservation and restoration of heritage structures. Under the project, the temple precinct will be expanded nearly seven times. The total cost of the entire project is around Rs 850 crores. The existing footfall of the temple, which is currently around 1.5 crore per annum, is expected to be doubled. The development of the project has been planned under two phases.

The Mahakal Path contains 108 stambhs (pillars) which depict Anand Tandav Swaroop (Dance form) of Lord Shiva. Many religious sculptures depicting the life of Lord Shiva are installed along the Mahakal Path. The mural wall along the path is based on stories about the act of creation, the birth of Ganesha, story of Sati and Daksha among others from Shiva Purana. The area of plaza is spread over 2.5 hectares and is surrounded by a lotus pond which contains the statue of Shiva along with water fountains. The entire premise will be monitored 24×7 by Integrated Command and Control Centre with the help of artificial intelligence and surveillance cameras.