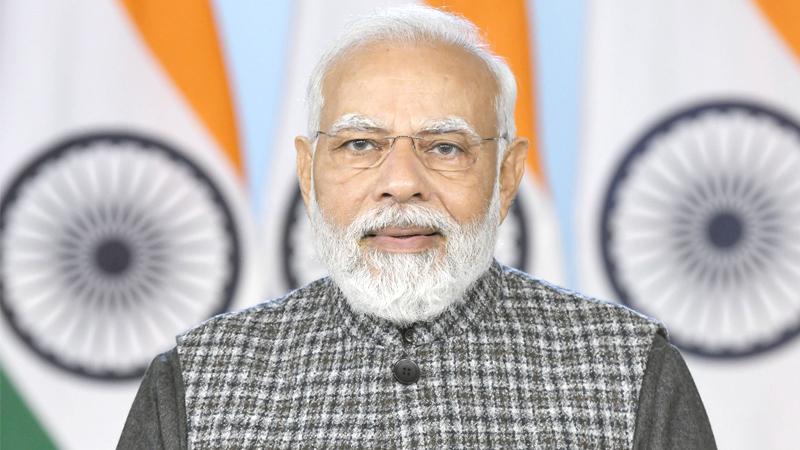 The Prime Minister, Shri Narendra Modi distributed about 71,000 appointment letters to newly inducted recruits in Government departments and organisations via video conferencing today. The Rozgar Mela is a step towards the fulfilment of the commitment of the Prime Minister to accord the highest priority to employment generation. The Rozgar Mela is expected to act as a catalyst in further employment generation and provide meaningful opportunities to the youth for their empowerment and participation in national development.

The Prime Minister also interacted with the appointees on the occasion

Ms Vahnei Chong from Manipur got her appointment letter as a Nursing Officer at AIIMS, Guwahati. She said it was her dream to be in the health sector in the Northeast. She, like others, is the first appointee in a government job from her family. The Prime Minister asked her about the obstacles that she faced during the selection process if any and also asked her to share her experience. She also conveyed her desire for continuous learning. She also informed about sensitization and learning about the provisions dealing with sexual harassment in the workplace. The Prime Minister congratulated her for the appointment in the Northeast region and said that the government is committed to the development of the region.

Shri Raju Kumar a divyang from Bihar got his appointment letter as a Junior Engineer in Indian Eastern Railways. Raju, a divyang, explained his journey and conveyed his desire to go further in life. He also talked about the support he got from his colleagues and family. Raju has done 8 courses on Karmyogi Prarambh course and benefited a great deal from the course on stress management and code of conduct. He told the Prime Minister that he will try for the Civil Services Exam of UPSC. The Prime Minister wished him well for his journey.

Kannamala Vamsi Krishna from Telangana got his appointment letter as a Management Trainee at Coal India Ltd. THe Prime Minister noted the hard work and hardships of his parents and the new trainee also recounted his journey and thanked the Prime Minister for the Rozgar Mela. Kannamala Vamsi Krishna also found the module very useful especially as it is available on mobile phones. Shri Modi wished him well and hoped that he will keep on learning in his career.

Addressing the gathering, the Prime Minister remarked that this is the first Rozgar Mela of 2023 which brings the precious gift of employment into the government fold for the 71,000 families. The Prime Minister congratulated the new appointees and noted that these employment opportunities will infuse a new ray of hope not just in the appointees but also among crores of families. The Prime Minister informed that lakhs of new families will get appointed to Government jobs in the days to come as Rozgar Melas are being organised regularly in NDA-ruled states and Union Territories. He informed that the Assam Government organised a Rozgar Mela only yesterday and states like Madhya Pradesh, Uttar Pradesh, Maharashtra and Uttarakhand are going to organise it very soon. The Prime Minister said that “regular Rozgar Melas have become a mark of this government. They show that whatever resolution is taken by this government is realised”.

The Prime Minister said that the transparency and speed of this recruitment process today characterise every aspect of the function of the government today. Shri Modi recalled the time when even routine promotions were mired in delay and disputes. He said that this government has addressed such issues and ensured a transparent process. “Transparent recruitment and promotion generate trust among the youth”, he said.

Underlining that it is the beginning of a new journey for those who received their appointment letters today, the Prime Minister highlighted the contributions and partnerships that they will make by being a part of the government machinery in the developmental journey of the nation. He noted that many new appointees will be interacting with the general public as direct representatives of the government and they will create an impact in their own ways. Drawing an analogy to the adage in the world of business and industry that the consumer is always right, the Prime Minister remarked that a similar mantra of ‘citizen is always right’ should be implemented in administration. “This gives rise to the feeling of service attitude and also strengthens it”, the Prime Minister added as he noted that when one gets appointed in the government fold, it is referred to as government service and not a job. He also highlighted the joy that can be experienced by servicing the 140 crore Indian citizens and said that it has a positive impact on the people.

Referring to many government servants taking online courses on iGOT Karmyogi platform, the Prime Minister said that in addition to official training, this platform has many courses for personal development. He said that self-learning through technology is an opportunity for today’s generation. Shri Modi gave his own example and said that he has never allowed the student in him to die. “Attitude of self-learning will improve the capabilities of the learner, her institutions and also the capabilities of India”, he said.

Referring to the Bharat-Net project of providing broadband connectivity in every village, the Prime Minister highlighted the new opportunities for employment when this connectivity takes place. Even those who are not too tech savvy, said the Prime Minister, understand its benefits. This has opened a new area of entrepreneurship by providing online services in villages. Shri Modi also noted the flourishing startup scene in tier 2 and tier 3 cities and said that this success has created a new identity for the youth in the world.