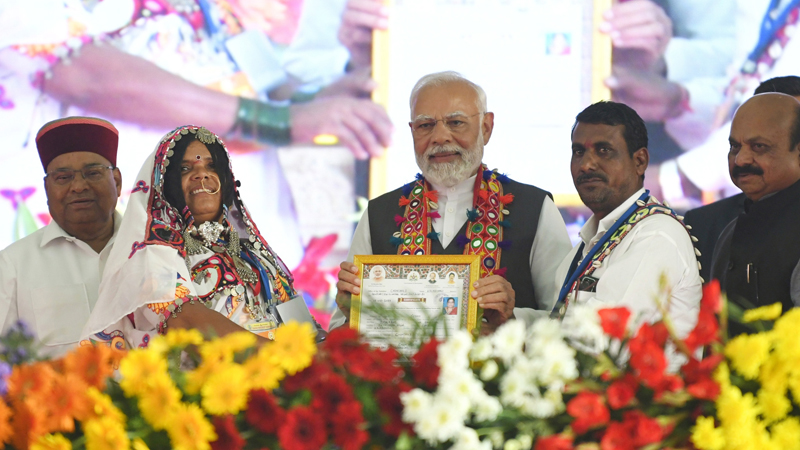 Addressing the gathering, the Prime Minister recalled that the Constitution of India came into force in the month of January and the rights of the citizens were ensured in independent India and emphasised that today in this holy month of January, the Government of Karnataka has taken a significant step towards social justice. Remarking on this momentous occasion for the Banjara community when more than fifty thousand families received the title deeds for the first time, the

Prime Minister said that this will ensure a bright future for the sons and daughters of such families living in ‘tanda’ inhabitations and took the opportunity to congratulate the citizens of the Banjara community of the five districts of Kalaburagi, Yadgiri, Raichur, Bidar and Vijayapura.

The Prime Minister informed about the crucial decision by the Karnataka Government to declare more than three thousand tanda inhabitations as revenue villages and congratulated Shri Basvaraj Bommai ji and his entire team for this remarkable step.

Recalling his connections with the region and the Banjara community, the Prime Minister noted that the people from this community have contributed toward national development in their own ways. He recalled the unforgettable moment when lakhs of Banjara families had come for a rally that the Prime Minister had attended during the 1994 assembly elections, and also noted the mothers and sisters in their traditional attire who showered their blessings upon him.

The Prime Minister said that the Banjara community has seen tough days, however, now the time has come for them to live with ease and dignity. He talked about the measures like scholarships for Banjara Community youth and help with livelihood, pakka houses. He said problems arising due to the nomadic lifestyle are also being addressed. The Prime Minister said that the steps taken today were recommended in 1993, however, this got delayed in the vote bank politics. “But now that indifferent atmosphere has changed”, said the Prime Minister.

The Prime Minister noted the employment opportunities that are being created by the Karnataka Government for the Banjara community. Be it forest produce, dry wood, honey, fruits or other such produces, these are now becoming a source of income. He informed that the previous governments used to give MSPs on only a handful of forest produce but today that number has gone up to more than 90 forest produce and reiterated the decisions of the Karnataka government that will benefit the Banjara community in this regard.

The Prime Minister said that even many decades after the Independence a large section of the population was deprived of the fruits of development and was outside the ambit of government assistance. Dalits, deprived, backward, tribals, divyang, children, and women are getting their due for the first time. They are getting basic facilities and getting them quickly. “We are working with a clear strategy for empowering the people”, Shri Modi asserted.

Mentioning schemes like Ayushman Bharat and free ration, the Prime Minister said “when basic needs are fulfilled and dignity is restored, new aspirations take birth as people rise above everyday contingencies and work to raise the level of living”. Jan Dhan accounts, said the Prime Minister, brought this neglected section into the financial mainstream. Similarly, Mudra Yojana ensured about 20 crore loans without collateral for SC, ST, and OBC giving rise to new entrepreneurs from these classes. 70 percent Mudra beneficiaries are women, he informed. Street vendors are getting collateral-free loans in the SVANidhi scheme. “We are going a step further by ‘Avkasha’, meaning the creation of new opportunities and giving new confidence to the youth of the deprived sections”, the Prime Minister said.

The Prime Minister noted the sensitivity of the present government towards the welfare of women in society and said that new opportunities are being created in every sector for them. Touching upon the welfare of tribal communities, the Prime Minister highlighted the efforts of the government to make the nation aware of the pride of the tribal society. He also noted the efforts taken in the last eight years to ensure the development of the divyang community, and informed that friends from neglected communities are at the apex of several constitutional institutions in the country. He further added that it was the present government that gave constitutional status to the National Commission for Backward Classes, reservations to the OBC category in the All India Medical Quota, abolishing the compulsion of an interview in Group C and Group D of Central Government, and making provisions for medical, engineering and technical subjects to be taught in local Indian languages. He underlined that the biggest beneficiaries of these steps are the youth of our villages and poor families from the SC, ST and OBC communities.

Emphasising that the double-engine government considers the tradition, culture, food and dress of every society living in India as our strength, the Prime Minister said that we are very much in favor of saving this power, preserving it. “Suhali, Lambani, Lambada, Labana and Baazigar, whatever you may name, you are culturally rich and vibrant, the pride of the country, the strength of the country. You have a history of thousands of years. You have a contribution in the development of this country”, the Prime Minister said as he emphasised the need to try to take this heritage forward and work towards everyone’s development by taking everyone along.

In conclusion, the Prime Minister recalled the Banjara communities of Gujarat and Rajasthan and the role of Lakha Banjara in creating water bodies. He expressed delight in being able to serve the same Banjara community.

In line with the Prime Minister’s vision of 100 percent saturation of government schemes, about 1475 unrecorded habitations have been declared as New Revenue villages in five districts of Kalaburagi, Yadgiri, Raichur, Bidar and Vijayapura. At Malkhed village of Sedam Taluka of Kalaburagi district, the Prime Minister distributed title deeds (hakku patra) to the eligible beneficiaries of these newly declared revenue villages. The issuance of title deeds to more than fifty thousand beneficiaries, who are largely from the marginalised and vulnerable communities from the SC, ST and OBC, is a step to provide formal recognition from the government for their land and will make them eligible for receiving government services like drinking water, electricity, roads etc.