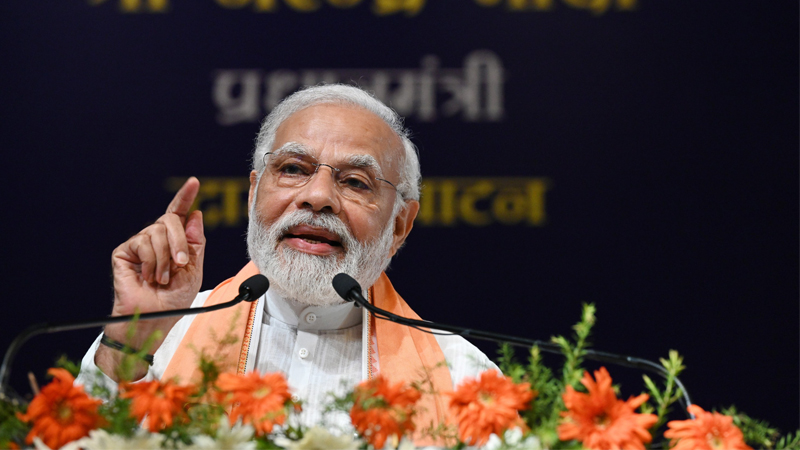 Addressing the gathering, the Prime Minister said that ‘our education system and young generation carry a big part of realizing the pledges of the ‘Amrit Kaal’. He conveyed his best wishes for the Samagam while bowing to Mahamana Madan Mohan Malviya. Earlier in the day, the Prime Minister inaugurated the Akshay Patra Mid-Day Meal Kitchen at LT College. He said that the high level of talent of the students that he interacted with is an indication of the effort that will be needed to harness that talent.

The Prime Minister said that “the basic premise of the National Education Policy is to take education out of narrow thinking and connect it with the modern ideas of the 21st century.” The Prime Minister said there was never a dearth of intellect and talent in the country, however, the education system created by the Britishers was never part of the Indian ethos. He underlined the multidimensionality of the Indian ethos of education and asked for that aspect to mark the modern Indian education system. The Prime Minister stressed that “we should not only prepare degree holder youth but give our education system to the country, whatever human resources are needed for the country to move forward. Our teachers and educational institutions have to lead this resolution.” For creating a New India, the Prime Minister stressed that a new system and modern processes are critical. What was not even imagined earlier is a reality now, he said. The Prime Minister continued “not only did we recover so fast from the big epidemic of Corona, but today India is one of the fastest-growing large economies of the world. Today we are the third-largest startup ecosystem in the world.”

The Prime Minister noted that in areas like space technology, where earlier only the government used to do everything, now a new world is being created for the youth through private players. Sectors that used to be closed to women are now showcasing their talent.

The Prime Minister highlighted that in the new policy, the entire focus is on making children skilled according to their talents and choices of the children. “Our youth should be skilled, confident, practical and calculative, education policy is preparing the ground for this”, he said. The Prime Minister emphasized the need to work for the future with a new thought process. He said children today are displaying a very advanced degree of talent and we need to be prepared to help and harness their talent.

The Prime Minister lauded the effort that went into the preparation of NEP, however, he emphasized that the momentum was not let down after the preparation of the policy. There has been constant discussion and work on the implementation of the Policy. The Prime Minister personally attended many seminars and events to talk about the implementation of the policy. This has resulted in a situation where the county’s youth is becoming an active partner in the growth of the country.

The Prime Minister also talked of a big overhaul of education infrastructure in the country. Many new colleges, universities, IITs and IIM are opening in the country. There has been an increase of 55 per cent in the number of medical colleges after 2014, he informed. The Common Entrance Test for universities will bring ease and equality to university admissions. “The National Education Policy is now opening the way for studies in the mother tongue. In this sequence, ancient Indian languages ​​like Sanskrit are also being carried forward”, he said.

The Prime Minister expressed confidence that India can emerge as a big centre of global education. He said guidelines have been issued to prepare Indian higher education as per international standards. Special offices have been established in 180 universities for international affairs of the institutions. He asked the experts to be aware of the international practices in the field.

The Prime Minister emphasized the importance of practical experience and fieldwork and asked for an attitude of ‘lab to land’. He asked the academics to validate their experience with verified testing. He asked for evidence-based research. He also asked for research on the demographic dividend of India and find ways to best utilize this and find solutions for the ageing societies of the world. Similarly, resilient infrastructure is another area of research. “National Education Policy’ has given us a tool to realize innumerable possibilities which were not available earlier. We need to use it fully, he concluded.

The Ministry of Education is organising Shiksha Samagam from 7th to 9th July. It will provide a platform for eminent academicians, policymakers and academic leaders to deliberate and share their experiences and discuss the roadmap for effective implementation of the National Education Policy (NEP) 2020. The event is being organised as part of capacity building of more than 300 Academic, Administrative & Institutional Leaders from Universities (Central, State, Deemed, and Private), and Institutes of National Importance (IIT, IIM, NIT, IISER) from all over the country. Various stakeholders would present the progress of implementation of NEP in their respective institutions and would also share noteworthy implementation strategies, best practices and success stories.

During the three-day Shiksha Samagam, panel discussions on nine themes identified for Higher Education under NEP 2020 will be conducted. These themes are Multidisciplinary and Holistic Education; Skill Development and Employability; Research, Innovation and Entrepreneurship; Capacity Building of Teachers for Quality Education; Quality, Ranking and Accreditation; Digital Empowerment and Online Education; Equitable and Inclusive Education; Indian Knowledge System; and Internationalisation of Higher Education.