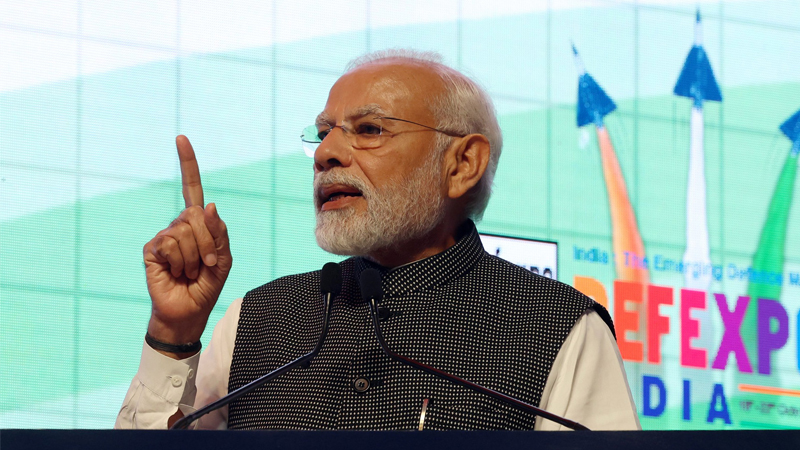 Addressing the gathering, the Prime Minister welcomed the delegates to an event of the capable and Aatmnirbhar Bharat both as a Prime Minister and as a son of Gujarat.

Remarking on the organisation of the DefExpo2 2022, the Prime Minister said that it paints a picture of New India and its capabilities whose resolve is being forged at the time of Amrit Kaal. He further added that it is an amalgamation of the country’s development as well as states’ cooperation. “It has the power and dreams of the youth, it has the resolve and capabilities of the youth. It has hopes for the world and opportunities for friendly nations.” the Prime Minister said.

Underlining the uniqueness of this edition of Defexpo, the Prime Minister said “this is the first defence expo where only Indian companies are participating and it features only Made in India equipment.” He announced “From the land of Iron Man, Sardar Patel we are setting an example of the capabilities of India before the world. The Expo has more than 1300 exhibitors which include the India Defence Industry, some joint ventures associated with Indian Defence Industry, MSMEs and more than 100 startups. The Prime Minister remarked that it provides a glimpse of the capability and possibility of India in one single frame.  He further informed that more than 400 MoUs are being signed for the first time ever.

Noting the positive response from various countries, the Prime Minister expressed happiness that when India is giving shape to its dreams, 53 friendly countries from Africa are walking with us. The second India-Africa Defence Dialogue will also take place on this occasion, the Prime Minister informed. “This relationship between India and Africa is based on time-tested trust that is further deepening and touching new dimensions with the passing of time”, the Prime Minister added. Dwelling upon the old ties between Africa and Gujarat, the Prime Minister recalled that the first railway lines in Africa had the participation of people from Kutch. Many words used in daily life in Africa have their origin in the Gujarati community in Africa. “Even for a global leader like Mahatma Gandhi, if Gujarat was his birthplace, then Africa was his first ‘Karmbhoomi’. This affinity for Africa is still central to India’s foreign policy. During the Corona period, when the whole world was worried about the vaccine, India delivered the vaccine giving priority to our friendly countries in Africa”, he said.

The 2nd Indian Ocean Region+ (IOR+) Conclave will also be held during the Expo, which will provide a stage for a comprehensive dialogue to promote defence cooperation amongst IOR+ nations to foster peace, growth, stability and prosperity, in line with the Prime Minister’s vision for Security and Growth for All in the Region (SAGAR).  The Prime Minister said, “Today, from international security to global trade, maritime security has emerged as a global priority. The role of the merchant navy has also expanded in the era of globalisation.” He continued, “The world’s expectations from India have increased, and I assure the world community that India will fulfil them. Therefore, this Defense Expo is also a symbol of global trust towards India”

The Prime Minister acknowledged Gujarat’s identity with regard to development and industrial capabilities. “This Defence Expo is giving a new height to this identity”, he said. He further added that Gujarat will emerge as a major centre of the defence industry in the coming days.

The Prime Minister who also laid the foundation stone of the Deesa airfield in Gujarat said that the forward airforce base will add to the security architecture of the country. Noting Deesa’s proximity with the border, the Prime Minister said that now India is better prepared to respond to any misadventure on the western borders. “After coming to the government, we decided to set up an operational base in Deesa, and this expectation of our forces is being fulfilled today. This region will now become an effective centre of security of the country”, Shri Modi added.

“Space technology is an example of what security will mean for any strong nation in the future. Various challenges in this area have been reviewed and identified by the three services. We have to work fast to solve them.” “Mission Defence Space”, he continued, “will not only encourage innovation and strengthen our forces but also provide new and innovative solutions.” The Prime Minister highlighted that space technology is shaping new definitions of India’s generous space diplomacy, giving rise to new possibilities. “Many African countries and many other small countries are benefiting from this”, he added. The Prime Minister informed that there are more than 60 developing countries with whom India is sharing its space science. “The South Asia satellite is an effective example of this. By next year, ten ASEAN countries will also get real-time access to India’s satellite data. Even developed countries like Europe and America are using our satellite data”, he added.

In the defence sector, the Prime Minister said, new India is moving ahead with the mantra of Intent, Innovation and Implementation. Till 8 years ago, India was recognized as the world’s largest defence importer. But New India showed intent, showed willpower and ‘Make in India’ is becoming a success story in the defence sector today. “Our defence exports have grown 8 times in the last 5 years. We are exporting defence materials and equipment to more than 75 countries of the world. In 2021-22 Defence exports from India reached $1.59 billion i.e. about 13 thousand crore rupees. And in the coming time, we have set a target to reach 5 billion dollars i.e. 40 thousand crore rupees’” he added.

The world is relying on India’s technology today because India’s armies have proved their capabilities. The Indian Navy has inducted state-of-the-art aircraft carriers like the INS-Vikrant into its fleet. This engineering giant and colossal masterpiece has been made by Cochin Shipyard Limited with indigenous technology. ‘The induction of the Prachand Light Combat Helicopters developed under the ‘Make in India’ initiative by Indian Air Force is a clear example of India’s defence capability, he said.

Throwing light on making India’s defence sector self-reliant, the Prime Minister highlighted that the armies have also finalised two lists of equipment which would be procured only within the country. This list of 101 such items is being released today. These decisions also show the potential of a self-reliant India. After the list, there will be 411 such equipment and equipment of the defence sector, which will only be bought under the “Make in India’. The Prime Minister informed that such a huge budget will strengthen the foundation of Indian companies and take them to new heights. He further added that it will be the youth of the nation that will benefit the most from it.

The Prime Minister highlighted that reliable options are now mushrooming to replace the monopoly that few companies have created in the field of defence supply. “The youth of India has shown the power to break this monopoly in the defence industry and this effort of our youth is for the global good.”, Shri Modi said. He underlined that the small countries of the world who are left behind in their security due to lack of resources will now reap great benefits from this.

The Prime Minister underlined, “India sees the defence sector as an infinite sky of opportunities, as positive possibilities.” Speaking on investment opportunities in the defence sector, the Prime Minister informed that India is building two defence corridors in UP and Tamil Nadu and many big companies of the world are coming to invest in India. He also highlighted the might of the MSMEs in the sector and informed that these big companies will be supported by our MSMEs while creating a large network of supply chains behind this investment. “Investments of such scale in this sector will generate huge employment opportunities for the youth in those areas which were not even thought of earlier”, the Prime Minister added.

The Prime Minister called upon all the companies present at the Defense Expo and urged them to give shape to these opportunities keeping the India of the future at the centre. “You innovate, take a pledge to be the best in the world, and give shape to the dream of a strong developed India. You will always find me there supporting you”, he concluded.

The Prime Minister inaugurated the DefExpo22. The Expo, being held under the theme ‘Path to Pride’, is witnessong the largest-ever participation in Indian Defence Expo held to date. For the first time, it will witness a defence exhibition held exclusively for Indian companies including Indian subsidiaries of Foreign OEMs, Division of company registered in India, Exhibitor having Joint Venture with an Indian company. The event will showcase the expansive scope and scale of Indian defence manufacturing prowess. The expo will have an India Pavilion and ten state pavilions. At the India Pavilion, the Prime Minister unveiled HTT-40 – the indigenous trainer aircraft designed by Hindustan Aeronautics Limited (HAL). The aircraft has state of art contemporary systems and has been designed with pilot-friendly features.

During the programme, the Prime Minister also launched Mission DefSpace – to develop innovative solutions for the Defence Forces in the Space domain through industry & startups. The Prime Minister also laid the foundation stone of the Deesa airfield in Gujarat. The forward airforce base will add to the security architecture of the country.

The expo will witness the 2nd India-Africa Defence Dialogue under the theme ‘India-Africa: Adopting strategy for synergizing Defence and Security Cooperation’. The 2nd Indian Ocean Region+ (IOR+) Conclave will also be held during the Expo, which will provide a stage for a comprehensive dialogue to promote defence cooperation amongst IOR+ nations to foster peace, growth, stability and prosperity, in line with the Prime Minister’s vision for Security and Growth for All in the Region (SAGAR). During the Expo, the first-ever Investors’ Meet for defence will take place. It will also witness more than a hundred startups getting an opportunity to showcase their innovations at Manthan 2022, the defence innovation event of iDEX (Innovations for Defence Excellence). The event would also see the forging of 451 partnerships/launches through the event ‘Bandhan’.