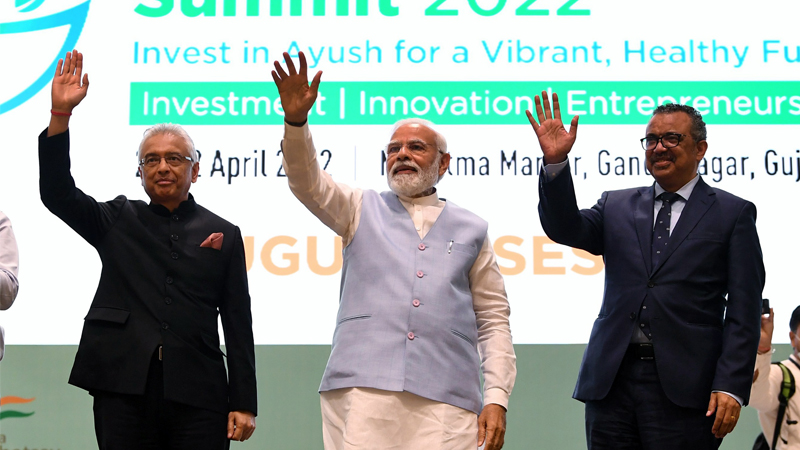 The Prime Minister, Shri Narendra Modi today inaugurated the Global AYUSH Investment & Innovation Summit at Mahatma Mandir in Gandhinagar, Gujarat. the Prime Minister of Mauritius Mr. Pravind Kumar Jugnauth and Dr. Tedros Ghebreyesus, Director-General, World Health Organization (WHO) were present on the occasion. Union Ministers Dr Mansukh Mandavia, Shri Sarbananda Sonowal, Shri Munjapara Mahendrabhai and Chief Minister of Gujarat Shri Bhupendrabhai Patel were among those present. The three-day summit will witness 5 Plenary sessions, 8 roundtables, 6 workshops, and 2 symposiums, with the presence of around 90 eminent speakers and 100 exhibitors. The Summit will help uncover investment potential, and give a fillip to innovation, research & development, start-up ecosystem, and the wellness industry. It will help bring together industry leaders, academicians and scholars together and act as a platform for future collaborations.

Dr. Tedros Ghebreyesus expressed his happiness to be present in the state and country of Mahatma Gandhi which he termed as ‘pride of the world’. He said that India’s philosophy of ‘Vasudhaiv Kutumbakam’ is the driving force behind the launch of WHO Global Centre for Traditional Medicine (GCTM) in Jamnagar yesterday. He said that the establishment of the Centre is historic and will prove to be a game changer. He informed that the Centre is designed to be an engine of innovation to drive the agenda of evidence, data and sustainability and optimization of use of traditional medicine. The DG commended the Prime Minister and Indian government for harnessing the power of innovation in public health. He appreciated use of data and integrated information sharing systems in Indian hospitals. He praised the AYUSH ministry for fostering the spirit of collection of data for research in traditional medicine. Noting the rising global demand and investment in the Ayush products the DG said that the whole world is coming to India and India is going to the whole world. He emphasized long term investment in innovation ecosystem in health in general and traditional medicines in particular; developing traditional medicines by innovators, industry and government in environmentally sustainable and equitable manner and protecting the interest of the communities that developed these traditions should also benefit when these medicines are brought to the market, including by sharing the fruits of intellectual property. The DG concluded by thanking the Prime Minister. “Thank you so much for championing this important initiative. Which I believe that not only the Centre but your championing will bring significant change in the use of traditional medicines”, the DG WHO told the Prime Minister Modi. He also praised Prime Minister of Mauritius Mr. Pravind Kumar Jugnauth for his commitment to traditional medicine. He also noted the happy coincidence of WHO turning 75 in the year of Azadi ka Amrit Mahotsav.

Mr. Pravind Kumar Jugnauth praised India and Gujarat for their contribution in the field of traditional medicine. He also noted India’s support in health sphere in his country. Noting the common ancestry with India, the Prime Minister of Mauritius underlined the importance given to Ayurveda in his country.  He informed about establishment of an Ayurvedic hospital in Mauritius and thanked India for donation of traditional medicines during the first lockdown. “This was one of the many gestures of solidarity for which we are ever grateful to the Indian government and particularly to the Prime Minister, Shri Narendra Modi ji”, said Mr. Pravind Kumar Jugnauth.

Speaking on the occasion, the Prime Minister Narendra Modi said that the idea of the Global AYUSH Investment & Innovation Summit came to him during the time of pandemic when Ayush provided a strong support for improving immunity of the people and Ayush products saw surge of interest and demand. Recalling Indian efforts to tackle the pandemic the Prime Minister noted the promise shown by the modern pharma companies and vaccine manufacturers if they get investment at the right time. “Who could have imagined that we would be able to develop corona vaccine so soon?”, he asked.

Describing the strides made by the Ayush sector the Prime Minister said “we are already witnessing unprecedented growth in the production of AYUSH medicines, supplements and cosmetics. In 2014, where the AYUSH sector was less than $3 billion, today it has increased to more than $18 billion.” He said that the Ministry of AYUSH has taken several major steps to encourage startup culture in the field of Traditional Medicines. A few days back an incubation center developed by All India Institute of Ayurveda has been inaugurated, Shri Modi informed. Describing the current age, the era of unicorns, the Prime Minister informed that in the year 2022 itself, so far 14 start-ups from India have joined the Unicorn Club. “I am sure unicorns will emerge from our AYUSH start-ups very soon”, he hoped. Noting that the production of medicinal plants can be a good means of increasing the income and livelihood of the farmers and the scope of employment generation in this, the Prime Minister highlighted the importance of facility to easily connect with the market for the farmers involved in the production of medicinal plants. For this, the government is also working on modernization and expansion of AYUSH e-market place, he said. “India is a treasure trove of herbal plants, it is, in a way our ‘Green Gold’”, the Prime Minister stressed.

The Prime Minister described the unprecedented efforts made in the past years to promote the export of AYUSH products. Emphasis has been laid on mutual recognition of AYUSH drugs with other countries. For this more than 50 MoUs have been entered with different countries in the last few years. “Our AYUSH experts are developing ISO standards in collaboration with the Bureau of Indian Standards. This will open a huge export market for AYUSH in more than 150 countries”, he said.

Shri Modi also informed that FSSAI has announced a new category named ‘AYUSH Aahar’ in its regulations last week. This will greatly facilitate the producers of herbal nutritional supplements. Similarly, India is also going to make a special AYUSH mark. This mark will be applied to the highest quality AYUSH products made in India. This AYUSH mark will be equipped with the provisions of modern technology. “This will give people all over the world the confidence of quality AYUSH products” he added.

The Prime Minister announced that the government will develop a network of AYUSH parks to encourage the promotion, research and manufacturing of AYUSH products across the country. These Ayush Parks will give new direction to Ayush Manufacturing in India, Shri Modi said.

Continuing on the potential of traditional medicine, the Prime Minister noted the role of traditional medicines in increasing the tourism of Kerala. “This potential is there in every corner of India. ‘Heal in India’ can become a big brand of this decade” he said. Wellness centers based on Ayurveda, Unani, Siddha etc. can be very popular, he said. To promote this further, the Prime Minister continued, the government is taking another initiative for foreign nationals who want to come to India to take advantage of AYUSH therapy. “Very soon, India is going to introduce a special AYUSH visa category. This will facilitate people to travel to India for AYUSH therapy” declared the Prime Minister.

The Prime Minister also narrated the Ayurveda success story of Former Prime Minister of Kenya, Raila Odinga’s daughter Rosemary Odinga regaining her eyesight after Ayush treatment. Rosemary Odinga was present in the audience and the Prime Minister introduced her as the gathering gave her a thunderous applause. He continued that India of the 21st century wants to move ahead by sharing its experiences and its knowledge with the world. “Our heritage is like a legacy to the entire humanity”, he said. The Prime Minister stressed that one of the main reasons behind the prosperity of Ayurveda has been its open source model. Comparing this with the open-source movement in IT sector, the Prime Minister emphasized that Ayurveda tradition went from strength to strength by sharing of knowledge. He stressed the need to work with the same spirit of open-source taking inspiration from our ancestors. He hoped that Amrit Kaal of next 25 year will prove to be the golden period of traditional medicines.

The Prime Minister address ended on a very personal and interesting note. Narrating Dr. Tedros Ghebreyesus’s love for India and his regard for his Indian teachers and his affection for Gujarat, Shri Modi gave him a Gujarati Name ‘Tulsi Bhai’. He explained the auspicious and exalted status of Tulsi in Indian tradition to the audience and a beaming DG, WHO and thanked him and Prime Minister of Mauritius Mr. Pravind Kumar Jugnauth for their presence.