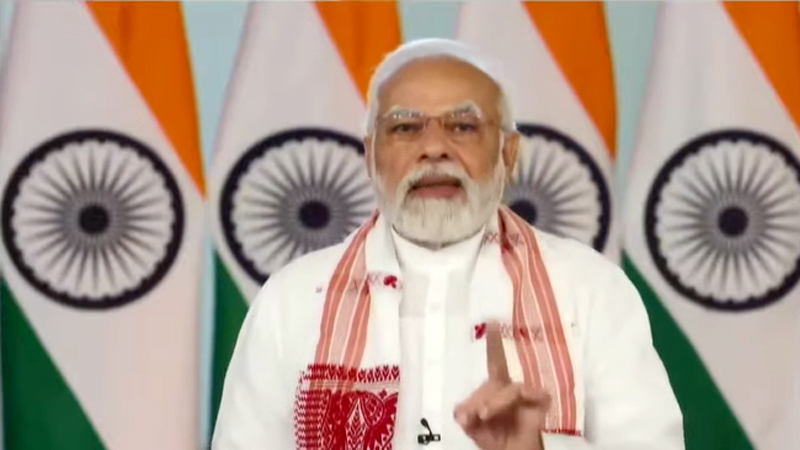 Addressing the gathering, the Prime Minister congratulated the ‘strong voice of the Northeast in the Assamese language’ Dainik Agradoot for the occasion and complimented them for keeping the values of unity and harmony alive through the medium of journalism.

The Prime Minister remarked that under the guidance of Kanak Sen Deka, the Agradoot always kept the national interest paramount. Even during the Emergency, when the biggest attack on democracy took place, even then Agradoot daily and Deka ji did not compromise on journalistic values. He created a new generation of value-based journalism, he said.

The Prime Minister empathized that for the past few days, Assam is also facing great challenges and difficulties in the form of floods. Normal life has been greatly affected in many districts of Assam. The Chief Minister and his team are working very hard day and night for relief and rescue, he said. The Prime Minister assured the people of Assam, the readers of Agradoot, that the central and state governments are working together to reduce their difficulties.

The Prime Minister underlined the sterling contribution of Indian language journalism to Indian tradition, culture, freedom struggle and the development journey. Assam has played a key role in the development of language journalism in India as the state has been a very vibrant place from the point of view of journalism. Journalism started 150 years ago in the Assamese language and kept on getting stronger with time, he added.

The Prime Minister recalled that the journey of the Dainik Agarkar in the last 50 years narrates the story of the change that has taken place in Assam. People’s movements have played an important role in realizing this change. People’s movements protected the cultural heritage and Assamese pride of Assam. And now Assam is writing a new development story with the help of public participation.

The Prime Minister said when there is dialogue, there is a solution. It is through dialogue that possibilities expand. Therefore, along with the flow of knowledge in Indian democracy, the flow of information is also flowing continuously. Agradoot is part of that tradition, he said.

On the eve of 75 years of independence, the Prime Minister questioned limiting the intellectual space among a few people who know a particular language. He further said this question is not only of emotion but also of scientific logic. This may be seen as a reason for lagging behind in research on the three industrial revolutions. The Prime Minister said the expansion of Indian languages ​​was stopped during the long period of slavery, and in modern epistemology, research was limited to a few languages. A large section of India had no access to those languages, to that knowledge. He added that the scope of Intellect’s expertise kept shrinking. Due to this, the pool of invention and innovation has also become limited. In the 4th Industrial revolution, there is a massive opportunity for India to lead the world. This opportunity is due to our data power and digital inclusion. The Prime Minister stressed that “no Indian should be deprived of the best information, best knowledge, best skill and best opportunity just because of language, this is our effort. That’s why we encouraged studies in Indian languages ​​in the National Policy on Education.” The Prime Minister continued on the theme of knowledge in mother tongue and said that “ it is now our endeavour to make the world’s best content available in Indian languages. For this, we are working on the national language translation mission. The effort is that the Internet, which is a huge storehouse of knowledge, and information, can be used by every Indian in his own language.” He also talked of the Bhashini Platform, a Unified Language Interface launched recently. “It is important from every aspect, social and economic, to make the Internet available to crores of Indians in their own language”, he added.

Underlining the biodiversity and cultural richness of Assam and Northeast, the Prime Minister said Assam has a rich legacy of music and that it needs to reach the world at large. He said efforts of the last 8 years with regard to physical and digital connectivity of the region will be hugely beneficial for the tribal tradition, tourism and culture of Assam.

“Well-informed, better-informed society should be the goal for all of us, let us all work together for this”, the Prime Minister concluded.