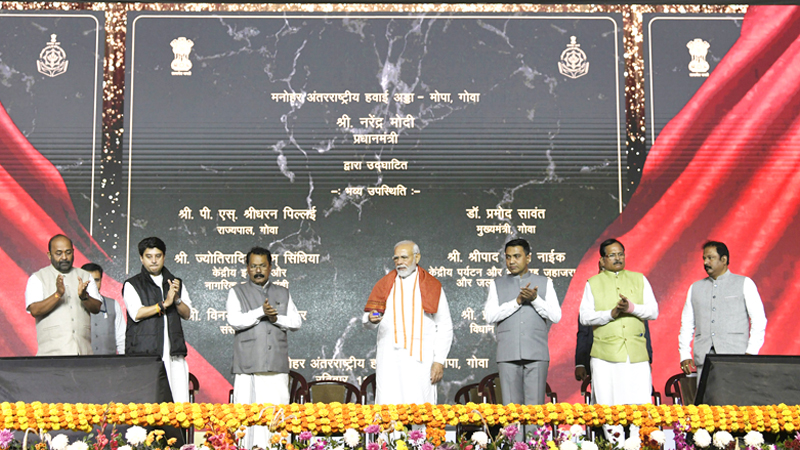 The Prime Minister, Shri Narendra Modi inaugurated the Mopa International Airport, Goa. The foundation stone of the airport was laid by the Prime Minister in November 2016. Developed at a cost of around Rs 2,870 crores, the airport has been built on the theme of sustainable infrastructure and comprises a solar power plant, green buildings, LED lights on the runway, rainwater harvesting, state-of-the-art sewage treatment plant with recycling facilities, among other such facilities. Initially, phase I of the Airport will cater to around 4.4 million passengers per annum (MPPA), which can be expanded to a saturation capacity of 33 MPPA.

Addressing the gathering, the Prime Minister congratulated all the citizens of Goa and the country for the inauguration of the greenfield airport in Mopa. Recalling his visits to Goa in the last eight years, the Prime Minister asserted that the love and affection shown by the people of Goa towards him will be repaid with interest in the form of development. “This advanced airport terminal is an attempt to return the favour” he added. He expressed happiness that the Airport is named after the late Manohar Parrikar.

Remarking on the approach towards infrastructural development by the governments in the past, the Prime Minister said that the vote bank had been the first priority instead of the needs and requirements of the citizens. The  Prime Minister underlined that thousands of crores were spent on projects that were not even required. As a result, the places that were in dire need of infrastructural development remained neglected. “Goa International Airport is a clear example of this”, he added. Recalling Atal Bihari Vajpayee’s government that had initially planned this airport, the Prime Minister lamented the lack of effort after his government was out of power and the project remained abandoned for many years. In 2014, the Prime Minister said that once the Double Engine Government came to the scene, work on the airport gained new momentum and he laid the foundation stone 6 years ago despite legal hurdles and the pandemic, this airport is ready to function today. The airport has the facility to handle about 40 lakh passengers per year which can be scaled up to 3.5 crores in future. Apart from tourism benefits, the presence of two airports has created new opportunities for Goa as a cargo hub.

The Prime Minister pointed out that Manohar International Airport is proof of the changed working style and approach to governance. He said before 2014, air travel was an elite affair for well-to-do people. This neglect of the common citizen’s desire for air travel led to low investment in airports and other infrastructure related to air travel and India lagged behind in air travel despite huge potential. The Prime Minister said that in the first 70 years of independence, the number of airports in the country was just 70 and air travel was restricted to big cities. The Government worked on 2 levels, the Prime Minister continued, First, the Airport network was expanded throughout the country. Second, common citizens got the opportunity for air travel via the UDAN scheme. In the last 8 years, 72 airports have been constructed compared to 70 in the 70 years before that. This means that the number of airports has doubled in the country. Furthermore, the number of air passengers rose to more than 14 crores in 2020 (just before the pandemic) compared to just 6 crore passengers in the year 2000. More than 1 crore passengers flew under the UDAN scheme. “Because of these measures, India has become the world’s third-largest aviation market”, he said.

Referring to the achievements of the Udaan Yojna, the Prime Minister said that it has the potential to become a case study for the academic world. The Prime Minister also remarked on the changing trend of the middle class checking for air tickets instead of railways even for shorter distances. He remarked that as the network of air connectivity expands in the country, travel by air is fast becoming the go-to means of transportation.

The Prime Minister said, “It is true that tourism helps in boosting the soft power of a nation, while as a nation becomes stronger, the world wants to know more about that nation and is attracted towards it.” The Prime Minister further added that if one glances at India’s prosperous history, it was the centre of attraction for the entire world where scholars, travellers, businessmen, industrialists and students would come to India to know more about the land. The Prime Minister also lamented the dark time of slavery faced by India which transformed the image and perspective toward the country even though the culture and traditions remained the same. “India of the 21st Century is New India which is making a mark on the global platform, and as a result, the perspective of the world is changing rapidly”, the Prime Minister remarked. He underlined that the world of today wants to know India and understand its ways. He further added that a lot of foreigners are narrating India’s story on digital platforms.

The Prime Minister listed the steps taken to ensure ease of travel and improve the country’s tourism profile in the last 8 years. He talked about easing the visa process, improved visa-on-arrival facilities, modern infrastructure and last-mile connectivity, and accompanying digital, mobile and railway connectivity. These measures have borne results. In 2015 the number of domestic tourists in India was 14 crore. Last year this number increased to about 70 crores, he said.

The Prime Minister reiterated that tourism has the biggest potential for employment and self-employment and elaborated upon the steps to improve the tourism infrastructure in Goa. “More than 10 thousand crores have been invested in highway projects in the state since 2014. The traffic problem in Goa is also being addressed. Electrification of the Konkan Railway is also benefiting the state”, he said.

The Prime Minister said, apart from increasing connectivity, the government’s focus is also on promoting heritage tourism by improving the upkeep of the monuments, connectivity and related facilities. Shri Modi mentioned the development of the Agoda Jail Complex museum as an example of this effort. He added that modern technology is being used to make the monuments more attractive and the journey to the places of pilgrimage and the monuments is being facilitated via special trains, he said.

The Prime Minister also praised the efforts of the Goa Government for laying equal importance on social infrastructure as much as physical infrastructure. The Prime Minister praised the success of Swyampurna Goa Abhiyan which was the key to promoting ease of living and making sure that no citizen remains deprived of the government schemes. “Today, Goa has become the perfect example of a 100% saturation model”, the Prime Minister concluded as he encouraged everyone to carry forward the development work that is taking place in the state.

Developed at a cost of around Rs 2,870 crores, the airport has been built on the theme of sustainable infrastructure and comprises a solar power plant, green buildings, LED lights on the runway, rainwater harvesting, state-of-the-art sewage treatment plant with recycling facilities, among other such facilities. It has adopted some of the best-in-class technologies like 3-D Monolithic Precast buildings, StabilRoad, Robomatic Hollow precast walls, and 5G compatible IT infrastructure. Some of the features of the airport include a runway capable of handling the world’s largest aircrafts, 14 parking bays along with a night parking facility for aircrafts, self-baggage drop facilities, state of the art and independent air navigation infrastructure, among others.

Initially, phase I of the Airport will cater to around 4.4 million passengers per annum (MPPA), which can be expanded to a saturation capacity of 33 MPPA. The airport will boost the socioeconomic development of the State and serve the needs of the tourism industry. It has the potential of serving as a key logistics hub, directly connecting many domestic and international destinations. It is also planned for the airport to have multi-modal connectivity.

While being a world-class airport, the airport will also provide visitors with a feel and experience of Goa. The airport has extensively used Azulejos tiles, which are native to Goa. The food court also recreates the charm of a typical Goan café. It will also have a designated area for a curated flea market where local artisans and craftsmen will be encouraged to display and market their wares.