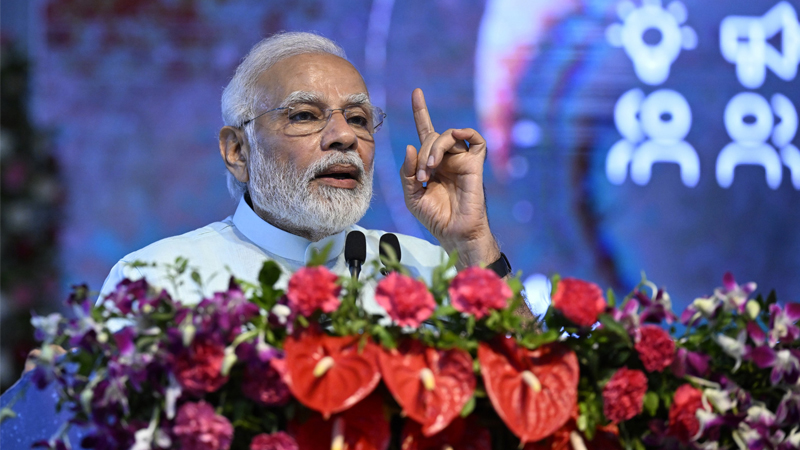 The Prime Minister, Shri Narendra Modi inaugurated the headquarters of the Indian National Space Promotion and Authorisation Centre (IN-SPACe) at Bopal, Ahmedabad today. The programme also witnessed the exchange of MoUs between IN-SPACe and private sector companies working in the field of space-based applications and services. The promotion and enabling of private entities in the space sector will provide a major fillip to the space sector and open up new vistas of opportunity for India’s talented youth. Union Minister Shri Amit Shah, Chief Minister of Gujarat Shri Bhupendrabhai Patel and representatives of the space industry were among those present on the occasion.

Addressing the gathering, the Prime Minister said that a wonderful chapter has been added in the development journey of modern India in the 21st century and congratulated all the countrymen, and the scientific community for the headquarters of the Indian National Space Promotion and Authorization Center i.e. IN-SPACe. The Prime Minister termed the launch of IN-SPACe as a ‘watch this space’ moment for the Indian space industry as it is a precursor to many development and opportunities. He said “IN-SPACe will give an opportunity to the youth of India to showcase their talent to the best minds of India. Whether they are working in the government or in the private sector, IN-SPACe will create great opportunities for all.” The Prime Minister further elaborated “IN-SPACe has the potential to revolutionize India’s space industry. So this is what I would say – ‘Watch this space’. IN-SPACe is for space, IN-SPACe is for pace, and IN-SPACe is for ace.”

The Prime Minister said that in the earlier system, India’s youth was not getting the opportunities to realize their potential fully. Indian youth bring innovation, energy and a spirit of exploration with them. It has been the misfortune of the country that with time, the difference between regulation and restriction was forgotten. Today we cannot put the condition of only the government route for carrying out their plans before our youth, the Prime Minister emphasized. He elaborated that the era for such restrictions is over and the government is removing all such restrictions from the path of our youth. He listed the opening of defence production, modern drone policy, geo-spatial data guidelines, and work from anywhere facility in the telecom/IT sector as examples of the government’s intentions. The Prime Minister stressed that it is our endeavour to create maximum Ease of Doing Business environment for the private sector of India so that the private sector of the country helps the countrymen equally in the Ease of Living.

The Prime Minister remarked “whether one is a scientist or a farmer-labourer, understands the techniques of science or does not understand, transcending all that, our space mission becomes the mission of all the people of the country. We saw this emotional solidarity of India during Mission Chandrayaan.” He expressed happiness that more than 60 private companies are leading in the country’s space sectors with advanced preparation. He singled out ISRO for bringing out this momentous change in the space sector of the country. He reiterated the importance of the step of opening up the space sector and credited the expertise and determination of ISRO for this initiative. India’s space programme has been the biggest identity of Aatmnirbhar Bharat Abhiyan, he said.

“Space-tech is about to become the basis of a major revolution in the 21st century. Space-tech is now going to become a technology not only of distant space but of our personal space”, the Prime Minister pointed out. He said that IN-SPACe needs to work continuously for making the gains of space technology accessible to the people of the country. The Prime Minister said that data collected by the private space companies is going to give them huge power in future. He said that the global space industry is valued at 400 billion US dollars and has a potential to become a 1 trillion dollar industry by 2040. He emphasized that India needs to increase its share in the global space industry and the private sector will play a big role in that. The Prime Minister also saw a strong role for India in the fields of space tourism and space diplomacy. He stressed that there are infinite possibilities in our country but infinite possibilities can never be realized with limited efforts. I assure you that this process of reforms in the space sector will continue uninterruptedly, he assured. The private sector must be heard and understood and business possibilities should be analyzed properly, for this, the Prime Minister said, a strong mechanism has been put in place. IN-SPACe will act as a single window, independent nodal agency to take care of all the needs of the private sector.

India is working on a New Indian Space Policy for coordinating between government companies, space industries, startups and institutions. We are soon going to bring a policy to improve ease of doing business in the space sector, the Prime Minister informed.

He said the future of humanity, its development… there are two areas that are going to be most influential in the coming days, they are – Space and Sea. India needs to move forward without delay in these areas, he said. He said there is a need to increase awareness about the strides and reforms by India in this field. He informed that Atal Tinkering Labs in schools are playing a role in this and he took initiative to create a viewing gallery for 10 thousand people to witness the launch of satellites at Sriharikota.

The Prime Minister expressed happiness that Gujarat is fast becoming a centre of big institutions of national and international level. He listed WHO Global Centre of Traditional Medicine at Jamnagar, Rashtriya Raskhsa University, Pandit Deendayal Energy University, National Innovation Foundation, Children’s University, Bhaskaracharya Institute for Space Applications and geoinformatics-BISAG and, now, IN-SPACe. He invited youth from all over India, especially from Gujarat, to take full advantage of these institutions.

The establishment of IN-SPACe was announced in June 2020. It is an autonomous and single window nodal agency in the Department of Space for the promotion, encouragement and regulation of space activities of both government and private entities. It also facilitates the usage of ISRO facilities by private entities.