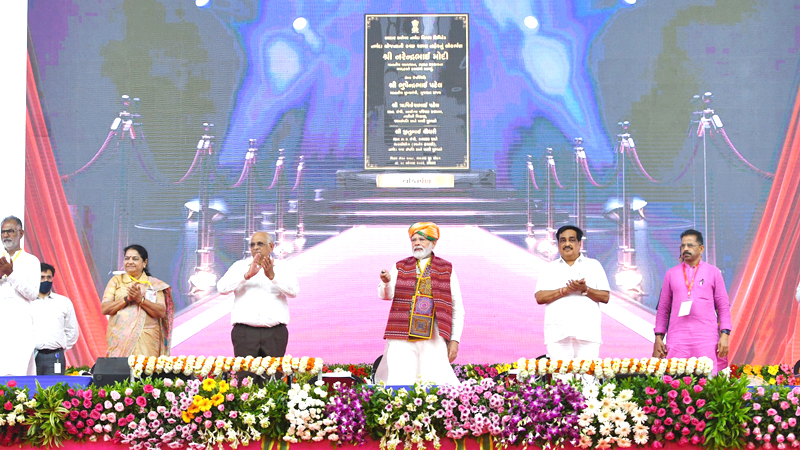 Addressing the gathering, the Prime Minister said that Smriti Van Memorial in Bhuj and Veer Bal Smarak at Anjar are the symbols of shared pain of Kutch, Gujarat and the entire country. He recalled when the concept of Anjar Memorial came up and a resolution was taken for completing the memorial via voluntary work, ‘Kar Seva’. He said that these memorials are being dedicated with a heavy heart in the remembrance of the lives lost in the devastating earthquake. He also thanked the people for their warm welcome today.

He recalled many emotions that went through his heart today and said with all humility that in commemorating the departed souls, Smriti Van Memorial is at par with 9/11 memorial and Hiroshima Memorial. He asked people and school children to keep visiting the memorial so that the balance and behaviour of  nature remains clear to everyone.

The Prime Minister recalled the eve of the devastating earthquake. He said “I remember when the earthquake happened, I reached here on the second day itself. I was not the Chief Minister then, I was a simple party worker. I didn’t know how, and how many people I would be able to help. But I decided that I will be here among you all in that hour of grief. And, when I became Chief Minister, the experience of service helped me a lot.” He recalled his deep and long association with the region, and remembered and paid tribute to people with whom he worked during the crisis.

The Prime Minister continued “Kutch has always had one specialty, which I often discuss. Even if a person sows a dream while walking on the way here, then the whole of Kutch gets involved in making it a banyan tree. These sacraments of Kutch proved every apprehension, every assessment wrong. There were many who said that now Kutch will never be able to stand on its feet. But today the people of Kutch have completely changed the scenario here.” He recalled that the first Diwali after the earthquake, he and his state cabinet colleagues spent in the area in solidarity with the people. He said that in that hour of challenge, we proclaimed that we will turn disaster into opportunity (‘aapda se awasar’). “When I say from the ramparts of the Red Fort that India will be a developed country by 2047, you can see that amidst death and disaster, we made some resolutions and we realized them today. Similarly, what we resolve today, we will surely realize in 2047”, he said

Highlighting the incredible work done since its complete devastation in 2001, the Prime  Minister said that Krantiguru Shyamji Krishnavarma University was formed in 2003 in Kutch, while more than 35 new colleges have also been established. He also talked about earthquake proof district hospitals and more than 200 functional clinics in the area and every household gets clean water of holy Narmada, a far cry from the days of water scarcity in those days. He elaborated on the steps of ensuring water security in the region. He said that due to the blessings of the people of the Kutch, all the key areas have been connected with Narmada water. “Kutch Bhuj Canal will benefit the people and farmers of the region”, he said. He also congratulated Kutch for becoming number one fruit producing district of entire Gujarat. He lauded the people for making unprecedented strides in cattle rearing and milk production. “Kutch has not only picked itself up but has taken the entire Gujarat to new heights”, he added.

The Prime Minister recalled the time when Gujarat  was hit with one crisis after another. He said, “While Gujarat was dealing with the natural calamity, the period of conspiracies started. In order to defame Gujarat in the country and in the world, one after another conspiracy was hatched to stop the investment here.” The Prime Minister highlighted how even with such a situation at hand, Gujarat became the first state in the country to enact a Disaster Management Act. “With the inspiration of this act, a similar law was made for the whole country. This act helped every government in the country during the pandemic”, he added. He continued that ignoring all the efforts for defaming Gujarat and defying the conspiracies, Gujarat charted a new industrial path. Kutch was one of the big beneficiaries of that.

He said that Kutch has the largest cement plants in the world today. Kutch is second in the world regarding welding pipe manufacturing. World’s second largest textile plant is in Kutch. Asia’s first SEZ came up in Kutch. Kandla and Mundra ports handle 30 per cent of India’s cargo and it produces 30 per cent salt for the country. Kutch produces 2500 MW power generated by solar and wind energy and the largest solar hybrid park is coming up in Kutch. The Prime Minister further added that Gujarat has a big role to play in the Green House campaign that is going on in the country today. Similarly, when Gujarat makes its mark as the Green House Capital of the world, Kutch will contribute a lot to it.

Recalling one of the Panch Pran – pride in our heritage, that he proclaimed from the ramparts of the Red Fort, the Prime Minister highlighted the prosperity and richness of Kutch. The Prime Minister remarked upon the expertise in city building of the Dholavira. He said, “Dholavira has been given the status of World Heritage Site only last year. Each brick of Dholavira shows the skills, knowledge and science of our ancestors.” Similarly, honouring the freedom fighters who were ignored for long is also part of taking pride in one’s heritage. He recalled the privilege of bringing back the remains of Shyamji Krishna Varma. Memorial at Mandvi and Statue of Unity are also major steps in this regard, he said.

The Prime Minister emphasised that the development of Kutch is a perfect example of a meaningful change with ‘Sabka Prayas’. “Kutch is not just a place, but it is a spirit, a living feeling. It is this spirit which shows us the way to the fulfillment of the colossal resolutions of the Azadi Ka Amrit Kaal”, the Prime Minister said.

Details of the projects

The state of the art Smriti Van Earthquake Museum is segregated in seven blocks based on seven themes: Rebirth, Rediscover, Restore, Rebuild, Rethink, Relive and Renew. The first block is based on the theme Rebirth depicting Earth’s evolution and ability of the earth to overcome every time. The second block showcases Gujarat’s topography and various natural disasters that the state is vulnerable to. The third block  takes one back to the immediate aftermath  after the 2001 earthquake. Galleries in this block address the massive relief effort undertaken by individuals as well as organisations. The fourth block showcases Gujarat’s rebuilding initiatives and success stories post 2001 earthquake. The fifth block prompts the visitor to think and learn about different types of  disasters and future readiness for any type of disaster at any time. The sixth block helps us to relive the experience of an earthquake with the help of a simulator. The experience is designed in a 5D simulator and is meant to give the visitor the ground reality of an event at this scale. The seventh block provides people with a space for remembrance where they can pay homage to the lost souls.