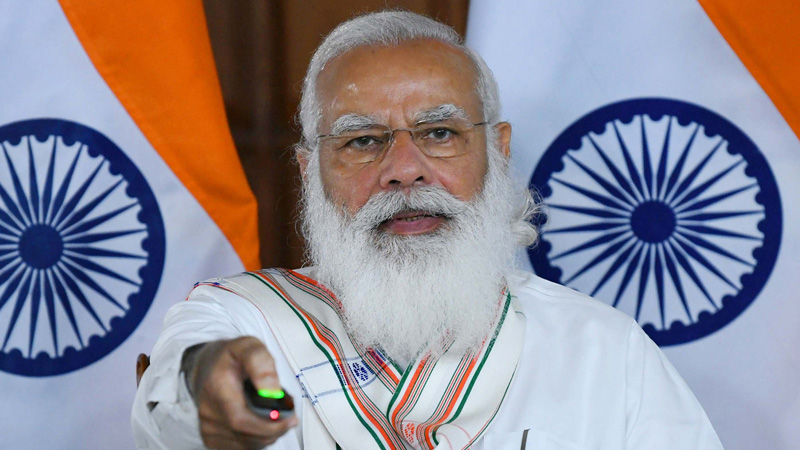 The Prime Minister, Shri Narendra Modi inaugurated ‘Maitri Setu’ between India and Bangladesh today through a video conference. He also inaugurated and laid the foundation stone of multiple infrastructure projects in Tripura. The Governor and the Chief Minister of Tripura were present. Video Message from the Bangladesh Prime Minister was played on the occasion.

Addressing the event, the Prime Minister said that Tripura is experiencing the clear difference between the 30 years of earlier governments and the ‘double engine’ government of the last three years. In place of corruption and commission culture of earlier years, benefits are reaching directly in the accounts of the beneficiaries. He also recalled that employees who were hassled over the salary on time are getting salary as per 7th pay commission. For the first time, MSP has been decided in Tripura where farmers used to face many problems for selling their produce. He also noted the environment of ease of doing business in place of the earlier culture of strikes. New investments are changing the earlier scenario of closure of industry. He said exports from Tripura in terms of volume have increased  5 times.

The Prime Minister informed that in the past 6 years, the central government has taken care of every requirement for the development of Tripura. He said there has been a significant hike in the central allocation for the state. Tripura had received Rs 3500 crore rupees for central development schemes between 2009-2014 whereas, between 2014-2019 more than Rs 12000 crore has been provided.

The Prime Minister said that connectivity related infrastructure has seen tremendous improvement in the last three years. He cited the rapid work for the airport, sea-link for internet in Tripura, rail link and waterways in this regard. He talked of HIRA development i.e. Highways, i-ways, Railways and Airways for Tripura.

The Prime Minister said now people will not have to depend only on the road for any kind of supply to the North-East. He said efforts are underway to connect Chittagong port of Bangladesh with North-East through an alternative route via the river. He said the ICP in Sabroom will work like a full-fledged logistic hub with warehouses and container trans-shipment facilities.

Due to this bridge over  Feni River Agartala will become the nearest city to an international sea port in India. Projects related to broadening of NH-08 and NH-208 which were dedicated and for which foundation stone was laid will strengthen the connectivity of the Northeast with the port, Shri Modi said.

The Prime Minister said the inauguration of several projects today are efforts to make Agartala a better city. Newly integrated command center will provide technical support to prevent traffic related problems and crime. He said similarly, multi level parking, commercial complex and widening of the road connecting the airport inaugurated today will improve the Ease of Living and Ease of Doing Business in Agartala a lot.

The Prime Minister said that decades old Bru refugee problem found a solution due to the efforts of the government’s efforts. He expressed the hope that the 600 crore rupees package will bring positive change in the lives of Bru people.

The Prime Minister touched upon the rich heritage of the state and said that renaming of the Agartala airport after Maharaja Bir Bikram Kishore Manikya is a mark of respect for his vision for the development of Tripura. Similarly, The Prime Minister expressed happiness at the opportunity for honouring the people who have served the rich culture and literature of Tripura like Thanga Darlong, Satyaram Reang and Benichandra Jamatia. He noted that bamboo based local art is being promoted under Pradhanmantri Van Dhan Yojna, giving new opportunities to local tribes.

Congratulating the Tripura government for completing three years, Shri Modi hoped that the State Government will continue to serve the people of Tripura.