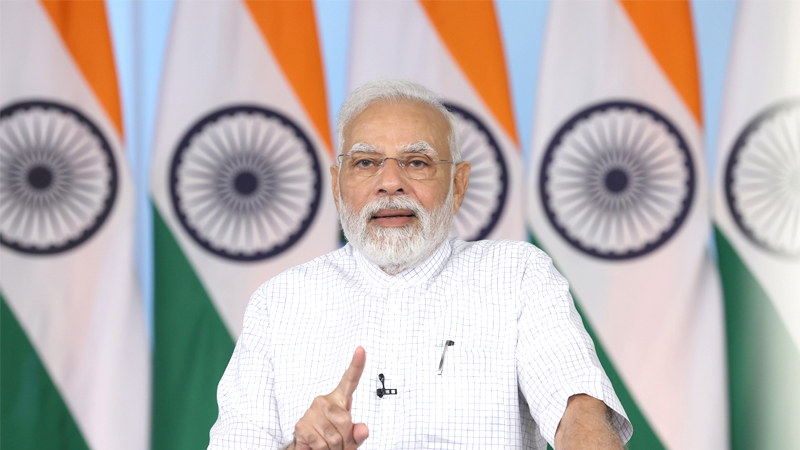 Addressing the gathering, the Prime Minister welcomed one and all to Ekta Nagar and the National Conference of Environment Ministers. The Prime Minister highlighted that the conference is being held when India is setting new goals for the next 25 years. Talking about the significance, the Prime Minister said that the holistic development of Ekta Nagar is a prime example of an environmental pilgrimage when it comes to forests, water conservation, tourism and our tribal brothers and sisters.

Giving examples of the International Solar Alliance, Coalition for Disaster Resilient Infrastructure, and LiFE movement, the Prime Minister remarked that India is not just taking huge strides in the field of renewable energy, but also guiding other nations of the world. The Prime Minister said, “Today’s new India is moving ahead with new thinking, new approach.” The Prime Minister further went on to add that India is a rapidly developing economy, and it is continuously strengthening its ecology as well. “Our forest cover has increased and wetlands are also expanding rapidly”, he added.

The Prime Minister remarked that today the world is joining India because of its track record of fulfilling its commitments. “Lions, tigers, elephants, one-horned rhinos and leopards have increased in numbers over the years. New excitement has returned from the homecoming of Cheetah in Madhya Pradesh a few days ago”, the Prime Minister added.

Drawing everyone’s attention to the net zero target for the year 2070, the Prime Minister said that the focus of the country is on green growth and green jobs. He stressed the need to maintain equilibrium with nature. He also highlighted the role of the environment ministries of the states in achieving these goals. The Prime Minister said, “I urge all environment ministers to promote a circular economy as much as possible in the states.” Shri Modi supplemented his statement by mentioning that it will significantly strengthen the Solid Waste Management campaign and will free us from the clutches of single use plastic.

Continuing with the role of the environment ministries, the Prime Minister said that this role should not be seen in a restricted manner. He lamented the fact that for a long time the Environment Ministries got shaped more as a regulator. However, the Prime Minister said, “I think that the role of the Environment Ministry is more as a promoter of the environment rather than as a regulator.” He asked the states to own the measures like Vehicle Scrapping policy, and biofuel measures like ethanol blending and strengthen them on the ground. He asked for healthy competition as well as collaboration among the states to promote these measures.

Throwing light on the groundwater issues, the Prime Minister said that the states with abundant water are also facing water shortages nowadays. The Prime Minister remarked that the challenges and measures like chemical-free natural farming, Amrit Sarovar and water security, are not limited to the individual departments and the environment department will also have to consider these as an equally pressing challenge. “It is critical to work with a participative and integrated approach by the environment ministries. When the vision of the environment ministries changes, I am sure, nature will also be benefitted.”

While stressing that this work is not just limited to Information Department or the Education Department, the Prime Minister said that public awareness is another important aspect of protecting the environment. “As you all are well aware that in the National Education Policy that has been implemented in the country, a lot of emphasis has been laid on experienced-based learning”, Shri Modi added. The Prime Minister remarked that this campaign should be led by the Ministry of Environment. This will create awareness about biodiversity among the children and will also plant the seeds of protecting the environment. “Children who live in our coastal areas should also be taught how to protect the marine ecosystem. We have to make our children, and future generations sensitive toward the environment”, the Prime Minister added. The universities and laboratories of our states should give top priority to innovations related to environmental protection, following the mantra of Jai Anusandhan. The Prime Minister also underlined the adoption of technology in protecting the environment. “Study and research on the conditions of forests in the forests are equally important”, Shri Modi added.

Focussing on the alarming rate of forest fires in the western world, the Prime Minister remarked that India’s share in global emissions may be negligible due to wildfire, but we have to stay alert at all times. The Prime Minister emphasised that the forest fire fighting mechanism in every state should be technology driven and robust. Shri Modi also stressed the training of our forest guards, should be given special emphasis when it comes to forest fire fighting.

The Prime Minister gave the example of the Pragati Maidan Tunnel in Delhi that was dedicated to the nation a few weeks ago. “Due to this tunnel, the trouble of the people of Delhi getting stuck in the jam has reduced. Pragati Maidan Tunnel will also help in saving more than 55 lakh litres of fuel every year”, he added. This will reduce carbon emissions by about 13 thousand tonnes every year which is equivalent to more than 6 lakh trees, according to experts. “Be it flyovers, roads, expressways, or railway projects, their construction helps in reducing carbon emissions equally. At the time of clearance, we should not ignore this angle” Shri Modi said.

The Prime Minister emphasised the use of the Parivesh Portal, a single-window mode for all types of clearances related to the environment while stressing its transparency and efficacy in reducing the rush for getting approvals. “Where environment clearance used to take more than 600 days 8 years ago, it takes 75 days today”, the Prime Minister added.

The Prime Minister pointed out that the coordination in infrastructure projects has escalated while many projects have gained momentum since the implementation of PM Gati Shakti National Master Plan. The PM Gati Shakti National Master Plan is also a great tool for protecting the environment. He also stressed the need for disaster-resilient infrastructure. Shri Modi said that we have to make good use of every emerging sector of the economy while facing the challenges related to climate change. “Both the central and the state government together have to move towards a green industrial economy”, the Prime Minister added.

In concluding his address the Prime Minister said that the Ministry of Environment is not just a regulatory body but also a great medium for economic empowerment of the people and creating new means of employment. “You will find a lot to learn, see and do in Ekta Nagar. Sardar Sarovar Dam, which gives Amrit to crores of people of Gujarat, is present here itself,” he added, “Such a huge statue of Sardar Saheb inspires us to stick to the pledge of unity.”

Pointing out the learning opportunities in Kevadiya, Ekta Nagar, the Prime Minister remarked that solutions to issues like the simultaneous development of ecology and economy, strengthening of the environment and creation of new employment opportunities, bio-diversity being a medium to increase eco-tourism, and how the wealth of the forest goes up with the wealth of our tribal brothers and sisters can be addressed here.

Taking forward the spirit of cooperative federalism, Conference is being convened to create further synergy amongst the Central and State Governments in formulating better policies on issues such as Elimination of Plastic Pollution through a multi-pronged approach, State Action Plans to combat Climate Change with a focus on LiFE effectively- Lifestyle for Environment. It will also focus on increasing the forest cover with particular emphasis on restoration of degraded land and wildlife conservation.

The two day Conference being organised on the 23rd and 24th of September will have six thematic sessions with topics focusing on LiFE, Combating Climate Change (Updating State Action Plans on Climate Change for Mitigation of Emissions and Adaptation to Climate Impacts); PARIVESH (Single Window System for Integrated Green Clearances); Forestry Management; Prevention and Control of Pollution; Wildlife Management; Plastics and Waste Management.