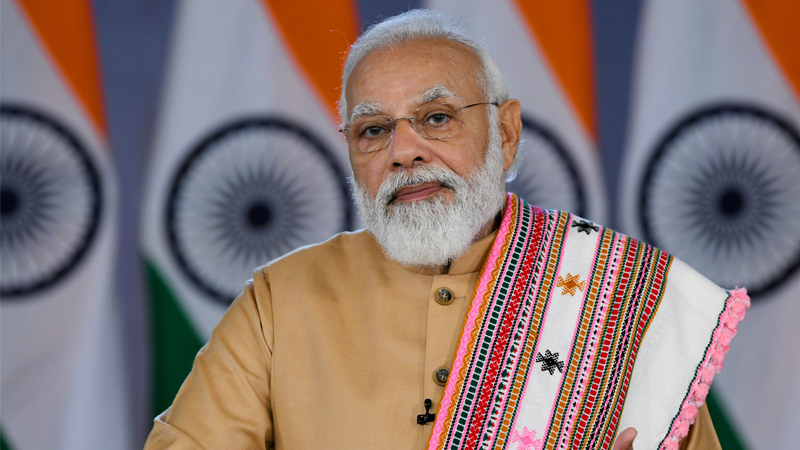 Addressing the gathering, the Prime Minister congratulated the Government of Gujarat, the Somnath Temple Trust and devotees for the inauguration of Somnath Circuit House. He pointed out that in the peak and the top of the temple the devotees will feel the consciousness of India standing proud despite the ravages of time. Dwelling on the challenging journey of the Indian Civilization and circumstances of hundreds of years of slavery, The Prime Minister remarked that the circumstances in which Somnath temple was destroyed, and the circumstances in which the temple was renovated by the efforts of Sardar Patel, both carry a big message. “Today, when in  the Azadi ka Amrit Mahotsav, we wish to learn from our past, places of culture and faith like Somnath are in the centre of that”, the Prime Minister pointed out.

He said that tourism plays a major role in the economy of many countries of the world. “We have infinite possibilities like this in every state and in every field”, he said. The Prime Minister narrated a virtual Bharat Darshan of spiritual destinations and listed Somnath, Dwarka, Rann of Kutch and  Statue of Unity in Gujarat; Places like Ayodhya, Mathura, Kashi, Prayag, Kushinagar and Vindhyachal in Uttar Pradesh; Devbhumi Uttarakhand has Badrinath Kedarnath; Himachal has Jwala Devi, Naina Devi; Entire North East is replete with the divine and natural glow; Rameshwaram in Tamil Nadu; Puri in Odisha; Tirupati Balaji in Andhra Pradesh; Siddhi Vinayak in Maharashtra; Sabarimala in Kerala. “These places represent our national unity and the spirit of Ek Bharat Shreshtha Bharat. Today, the country also sees them as a strong source of prosperity. Through their development we can catalyse development of a big area”, he said.

The Prime Minister remarked that in the last 7 years, the country has worked relentlessly to realize the potential of tourism. “Today, development of tourist centres is not just a part of the government schemes, but a campaign of public participation. The country’s heritage sites and development of our cultural heritage are great examples of this”. He listed measures like 15 theme based tourist circuits. For example, in the Ramayana Circuit, places related to Bhagwan Ram can be visited. A special train has been started. The Prime Minister informed that a special train is being started from Delhi for the Divya Kashi Yatra tomorrow. Similarly the Buddha Circuit is making it easier to visit places related to Lord Buddha. Visa rules have been eased for foerign tourists and tourist destinations were given priority in the vaccination drive.

The Prime Minister said today the country is looking at tourism in a holistic way. In today’s time, four things are necessary to develop tourism. First cleanliness- Earlier our tourist places, holy pilgrimage places were also unhygienic. Today Swachh Bharat Abhiyan has changed this picture. Another important factor in promoting tourism is convenience. But, the Prime Minister said,  the scope of facilities should not be limited to tourist places only. The facilities of transport, internet, correct information, medical arrangements should be of all kinds. And in this direction also all-round work is being done in the country. Time is the third important aspect of increasing tourism. In this era, people want to cover maximum space in minimum time. The fourth and very important thing to increase tourism is our thinking. It is necessary for our thinking to be innovative and modern. But at the same time how proud we are of our ancient heritage, it matters a lot.

The Prime Minister said after independence, the new development was for only a few families in Delhi. But today the country is leaving behind that narrow thinking and is building new places of pride and giving them grandeur. “It is our own government that built Babasaheb Memorial in Delhi, the APJ Abdul Kalam memorial in Rameshwaram. Similarly, the places associated with Netaji Subhash Chandra Bose and Shyamji Krishna Varma have been given due stature. Adivasi museums are also being built across the country to bring forth the glorious history of our tribal society”, the Prime Minister informed. Elaborating on the potential of the newly developed places, the Prime Minister said that despite the pandemic 75 lakh people have come to see the Statue of Unity. Such places will take our identity along with tourism to new heights, he said.

The Prime Minister advised against taking a narrow interpretation of his call for ‘vocal for local’ and said that the call includes local tourism. He reiterated his request for visiting at least 15-20 places of India before embarking on any tourism abroad.